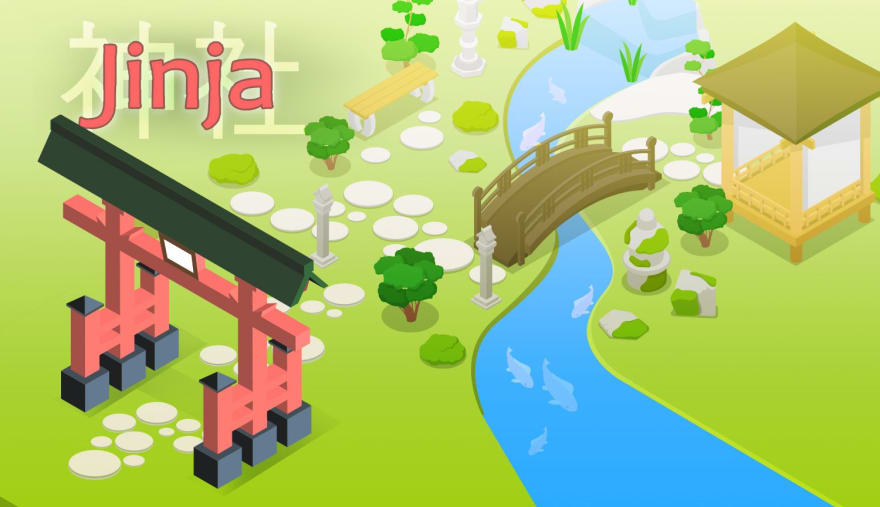 If the name Dreamweaver means anything to you, you're probably old enough to remember how shitty web development was in the 90s. CSS wasn't a "thing," we abused HTML tables, and tags like <marquee> were considered legitimate. Worse than all of this was the manual repetition; HTML was never intended to recognize elementary programming concepts like inheritance or imports. Even though sites seemed to have common elements between pages (such as navigation), the reality was a nightmare of hardcoding these elements by hand on every individual page of a site. Changing a navigation link meant manually making the same change across hundreds of pages. It was great.

We somehow managed to crawl out of that stone-age and into an era of reusable "templates," "partials," "components," and all sorts of ways to ensure we code as little as possible, if at all (looking at you, NPM). Flask's approach to this is via a templating system called Jinja2: and HTML preprocessor which lets us write HTML, which changes based on logic and context. Unlike static HTML, templating systems like Jinja empowers us to do things like share snippets between pages, or render pages conditionally based on context.

If you're familiar with Handlebars or even Django's templating system, Jinja is going to feel quite familiar. The same concepts of any templating engine still apply in Jinja, but Jinja happens to be better. Don't @ me.

If we were to dissect the "types" of HTML elements which make up a site, it would be easy to classify chunks of HTML as belonging to one of 3 types:

Setting up for Action

We're going to create a tiny Flask app to demonstrate how we can use Jinja to build websites utilizing the three concepts we just learned. We'll start by creating an app that uses 1 of each of the three template types: layout.html, home.html, and nav.html. These templates will live in a /templates folder, thus leaving us with an app looking as such:

Templates won't do us any good without an app to serve them. After creating a Flask app object in init.py, let's create a route in routes.py to set up a basic homepage:

All we're doing here is setting up a route called home(), which serves the home.html template any time a user visits our Flask app. Along with specifying which page template to serve, we also pass in two keyword arguments to render_template(): title and description. We'll see these in action in just a moment.

Let's check out what goes down when we fulfill the seemingly simple task of serving a page template. Here's what I have for home.html :

When a requested page template "extends" another, the requested template will contain all HTML of the extended parent. When home.html extends layout.html, we need to figure out where in layout.html our page will be mounted. Jinja handles this by declaring and matching reserved spaces in our templates named "blocks."

layout.html has a single block called "content" which happens to appear in both our page template and the layout it extends- this lets Jinja know that the contents of home.html should be loaded to this block, which effectively results in the following template at runtime:

The above demonstrates what a rendered home.html page after being loaded into layout.html. Our page is already looking a lot more like HTML.

Now that you’ve wrapped your head around the concept of blocks, here’s a curveball mindfuck to keep you in check: Layouts and pages can contain multiple blocks, which allows us to do some exciting things. For example, let’s say we want the ability to inject styles on to our layout, depending on which page extends it. Here’s home.html with two blocks: one for CSS styles to be inserted in our page <head>, and another for loading page content:

I bet you could guess what would happen when we load home.html into this new layout:

The "CSS" and "content" blocks from home.html are able to be matched and loaded into their respective blocks in layout.html This empowers us to change layout templates without being constrained by the DOM structure of layout.html.

Let's address the {{title}} and {{description}} blocks in the room. These double-bracket items represent reserved variable names. Back in routes.py , we passed a couple keyword arguments matching these names when we used render_template(). Our template will render these values at runtime:

This leaves us with one last Jinja statement: {% include 'navigation.html' %}. include tells Jinja "load a separate template named nav.html here." These standalone templates which get dropped into larger templates are called partials. My navigation.html is a simple header nav which looks like this:

Now we can see what our rendered homepage looks like in its entirety:

We’ve done it! We’ve dissected Jinja’s three template “types,” and used each one to build a single dynamic HTML page. This level of working knowledge is already respectable- it’s quite possible to build web apps armed only with the things we’ve covered thus far. That said, Jinja can go much, much deeper.

Jinja isn't just about sharing HTML between pages. Jinja can perform some significant business logic to render parts of templates conditionally. The most obvious example is a simple if statement:

Jinja if statements can contain any conditional operator you'd expect. {% if status == 1 %} and {% if "active" in status %} are both valid conditionals assessing numerical and string values, respectively.

We passed a couple of strings to home.html earlier, but we could actually almost any conceivable data type as well. Let's reimagine navigation.html as a dynamic template. Instead of hardcoding links into HTML, let's instead build these nav links based on data we pass to navigation.html from routes.py.

An excellent way to represent this data would be a list of dictionaries:

We can pass a Python list like nav to Jinja templates the same way we passed title and description earlier. Now we can adjust navigation.html to build links dynamically based on the contents of this list:

Jinja can loop through iterable data types (such as lists) using almost identical syntax to Python. The above example is looping through our list nav. Each member of nav is a dictionary, thus we can get the values of each dictionary using dot notation, as seen via {{ link.url }} and {{ link.name }}.

The Path of a Jinja Ninja

As you can gather from the official Jinja docs, we've only scratched the surface of what Jinja can handle. Knock yourself out, but be warned: mastering every corner of templating is like a more worthless version of being a RegEx guru. It's cool to have powerful tools available as offhand knowledge, but there's a hard line between mastering commonly applicable patterns versus being "kind of an asshole."

In case you're interested, the source code for this tutorial can be found on GitHub here:

Divide and Conquer: A powerful strategy for solving problems