This is part three in my series of building a small robot car. You can find the previous articles below:

Part One: First Steps Creating a Robot with MicroPython and Pyboard

I ended the last part wondering whether I should add some sensors to my robot, or replace the Arduino controller for a pyboard controller.

Because my initial idea for this project was to use the pyboard, I decided I would start by replacing the controller and then later I could add some sensors.

I've owned the pyboard for a few years now, but I've never really done much with it. I, therefore, suspected that the firmware might be out of date. So, the first item on the list was to update the firmware.

The documentation for this is excellent, but I did run into a minor problem because I kept downloading the firmware for pyboard v1.0, but I had v1.1. Once I figured that out, it was quick and easy.

Once the pyboard was up to date, it was time to find out how to control one of the DC motors with it.

After a bit of research, I found this article. Using that and the offical documentation for PWM, my initial code in micropython looked like this:

And this is how I connected it together, with the Maker Drive: 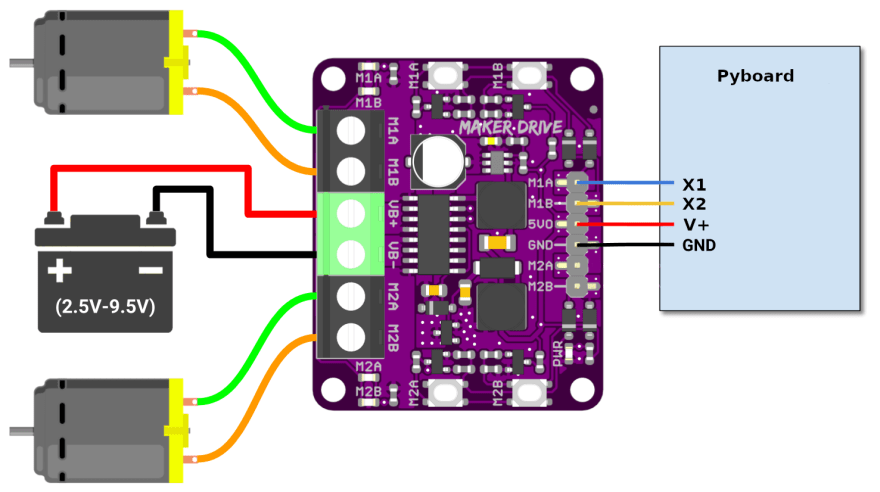 And this worked perfectly!

Based on the fact that I was using the X1 and X2 pins to run the first motor, and the layout, I reckoned I could use the X3 and X4 pins for the second motor.

So after adding the second motor, I made some changes to the code:

And voila! Both motors were running. What a beauty!

Once everything was working correctly, I put it together with the chassis and updated the code a bit to make it drive into a kind of a circle :D

You can see the current code and setup on my GitHub.

I'm really pleased how well this went and honestly thought it would take longer.

I'm going to put this project on to the side for a bit now. But the next item on the agenda for this project is to add some sensors to it and make them influence the driving.

Thank you for reading. For weekly updates from me, you can sign up to my newsletter.

Create a Modern Application with Django and Vue – Part One

How to Estimate Your Embedded IoT Device Power Consumption

Once suspended, halldorstefans will not be able to comment or publish posts until their suspension is removed.

Once unsuspended, halldorstefans will be able to comment and publish posts again.

Once unpublished, all posts by halldorstefans will become hidden and only accessible to themselves.

If halldorstefans is not suspended, they can still re-publish their posts from their dashboard.

Once unpublished, this post will become invisible to the public and only accessible to Halldor Stefansson.