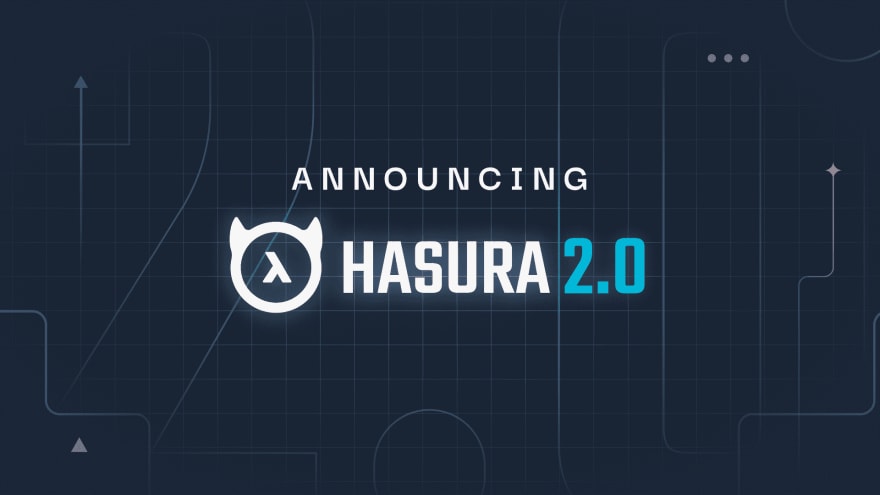 On behalf of the entire team at Hasura, I'm delighted to announce the release of Hasura GraphQL Engine 2.0 (also just called Hasura 2.0). 🎉

Hasura 2.0 is our most significant release over the last few years, but is also entirely backwards compatible with Hasura 1.x. Over the last 85 releases of Hasura over 2 years, we've endeavoured to never break user facing APIs and this major release is another checkpoint in that ensuring that users get new features without having to refactor their work. In fact, Hasura 2.0 == Hasura 1.4, but it was such a big release that we decided to call our next 1.4 release, 2.0.

TL;DR: How do I get started?

If you'd like to skip the spiel and just head on straight to trying it out, head to the docs to try 2.0 with Docker or try it for free on Hasura Cloud - our managed service offering of the Hasura GraphQL Engine. I am also hosting a webinar on the 4th of March, please join me and bring your questions.

Hasura 2.0 captures fundamental changes inside the GraphQL engine that allows Hasura to serve the needs of a much larger class of mission critical applications.

There are 5 main areas of work and feature additions you'll see in Hasura 2.0:

We first built Hasura with exclusive support for Postgres. This was a deliberate choice so that we could focus our engineering and product efforts and given the rise of Postgres and the Postgres ecosystem exploding this choice paid off well.

With Hasura 2.0 we've set the foundation to unlock 2 key capabilities:

As we've worked with our users, especially enterprise & mission critical workloads, we've noticed increasingly that users often bring multiple new or existing databases, even if its just Postgres. These are 2 of the top use-cases we've seen:

Hasura 2.0 allows bringing in multiple databases simultaneously to a single instance of Hasura GraphQL engine (or a scaled up cluster of Hasura instances).

Instead of having to supply a single env var, you can now add and remove database sources on the fly on a running Hasura instance!

Postgres was always just the beginning at Hasura. We've now refactored our query compilation pipeline so that it can be generalized to any database easily.

Existing or legacy mission critical data is often not on Postgres and the cost of ETL-ing that data to Postgres is infeasible and defeats the purpose of being able to query the source of truth directly - especially for fast-moving operational/realtime data.

And ofcourse, new data workloads also might go into other databases that aren't just Postgres!

With Hasura 2.0 we're launching with support for SQL Server and our first OLAP database - BigQuery.

We'll be rolling out SQL Server support on Hasura Cloud in phases over the coming day. You can also head to the docs to try Hasura with Docker and your own SQL Server database.

Hasura's philosophy of adding a new database is to keep the final GraphQL API similar, but without trying to normalize all database engines to the same common denominator interface. Hasura aims to bring out the best of a particular database engine while ensuring all the Hasura goodness of GraphQL, authorization and eventing Just Work.

We've started to put together a contribution guide of how you can extend a few typeclasses to add support for your favourite SQL system and also work closely with the maintainers to keep improve native support for that database and its goodness (its specific types, functions, operators, connection handling etc.).

Over the course of the year, we'll be bringing other types of databases systems into Hasura: document and key-value stores are big on our minds! Let us know what databases you'd like to see support for via our Github so that others can weigh in as well and help us prioritize.

Coming soon, in order of priority, are the following remote join capabilities:

GraphQL APIs have emerged as the best modern API for humans to explore, consume and integrate.

While GraphQL's goal at inception was to provide a specification for automating API composition on UIs and creating a type-safe client-server contract over JSON, its success goes far beyond that. Arguably, and much to the frustration of true GraphQL stans, GraphQL fragments and Relay style GraphQL are not as popular as they ought to be. This is because GraphQL solved a much bigger problem than just automating the tedious portions of API composition and integration on the UI.

GraphQL represents two big shifts in the way we think about APIs:

However, in practice, we've seen three big deterrents to using a GraphQL API in production - even where it's "technically" feasible:

This allows Hasura users to get all the benefits of GraphQL and REST - when the situation demands it. Hasura uses GraphQL as an intermediate representation and converts a RESTful request with its parameters to a parametrized GraphQL query and then executes it, with minimal overhead - query plans are cached after all!

Check out the REST to GraphQL interop specification on Github.

This allows Hasura to extend its authorization policy abilities across data-sources without being restricted to the authorization features supported by particular databases only.

Over time we plan to extend this authorization engine to create a generic and unified RLS style authorization layer across all data sources. With support for authorization on remote GraphQL services we've only just begun!

As data explodes, the need for declarative and "human observable" authorization becomes even more important.

A GraphQL layer fronting multiple heterogeneous data sources is an ideal candidate for being a single point of failure. Hasura 1.x was already seamless to run in a scaled up fashion as a cluster of replicas and they would sync with each other automatically.

With Hasura 2.0 we wanted to ensure that we can start bringing in features that make running a Highly Available and "distributed" Hasura cluster along with its interaction with a set of upstream data sources as seamless and easy as possible.

This is no longer about just making Hasura scale up and work, but also to make its interaction with upstream sources fault-tolerant & scalable to prevent the single-point-of-failure problem.

Hasura 2.0 features a "maintenance mode" that allows for major Hasura version upgrades of itself and connected sources without any downtime to the GraphQL API and event delivery systems.

These are the features coming to Hasura soon:

ICYMI, Hasura is a GraphQL server that doesn't require a build step! All of Hasura's configuration is entirely dynamic and API driven. This "metadata" API - which can be locked down in production depending on the use case - makes "change management" extremely convenient.

However, these metadata APIs are also extremely powerful because they allow Hasura users to "fetch" all of the configuration of a Hasura system on the fly.

While some of the features above available aren't in this release of Hasura 2.0, expect a lot of metadata tooling to come your way!

Here's the one we're most excited about are working on right now:

Hasura 2.0 is here and along with the features that are a part of this release, it sets the technical foundation for engineers and contributors to innovate and ship rapidly for the coming months and years.

Join me at the Hasura 2.0 launch webinar to go over these features in action, learn more and ask questions!

And ofcourse, in case you missed it, don't forget to register for the awesome (and free!) virtual GraphQL conference: https://graphql.asia/

How to deal with the kitchen sink syndrome

Which book did you read for "Data Structures Through C"? [When you were studying?]