First of all, “What is maximum pairwise product” problem? Well, the problem is to find a highest product value in a sequence of non-negative integers.

Input: A sequence of non-negative integers.

Output: The maximum value that can be obtained by multiplying two different elements from the sequence.

Here is the pseudocode of the above algorithm:

According to the pseudocode, we'll implement the algorithm in java as follows:

Well, this kind of error is probably caused by an Integer Overflow. Integer overflows cannot be detected until they have happened. That's why, we should always keep in mind about overflow errors in programming. So as you can see, this algorithm only works for small data and therefore, we need to assign another data type for large datasets. We are going to use long here.

Everything works well now. But you think it'll work fast and correctly when there are billions of input? As we can see there's two nested for loops for finding maximum pairwise product, this still is an O(n²) algorithm. So it still has an ugly running time. For large datasets, it will take for a long time to complete. WE NEED A FASTER ALGORITHM!

Stop and Think for a while. What if we find only the two largest numbers in the array and multiply them instead of multiplying each and every single possible combination.

Since we need to find the largest and the second largest numbers of the array, we'll only need two scans of the sequence.

This reduces the complexity of algorithm to O(n) and our algorithm is much optimized. 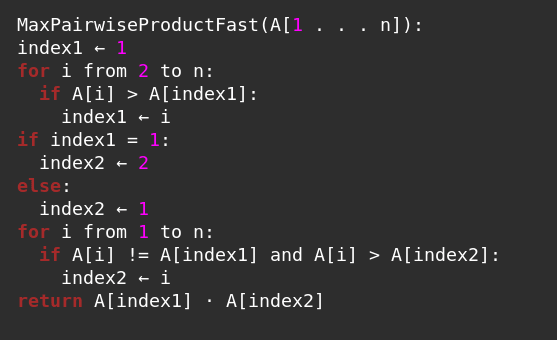 Here is the code for the optimized algorithm.

After doing optimization,testing and debugging, it is also required to test beyond the limits of normal operation. Writing bug-free code is impossible. There is no such thing like this but you can somehow minimize the volume and the severity of the bugs present in your code. Always remember, your algorithm can sometimes fail for some test cases and you will need to know which are those cases. This is where stress testing technique becomes useful. So, what's stress testing and why do we need it? To explain, it is a technique for generating thousands of tests with the goal of finding a situation where the algorithm fails to give the correct output.

Basically, a stress test consists of:

For our case, we create a infinite while loop and then generate arrays with random size and assign each array with random numbers. After that, we pass the array to both implementations and then compare the results.

Here is the stress test for the algorithm:

Well, the bitter truth is that generating tests automatically and running stress test is easy,
but debugging is hard, right?

Take a look at this stress test result(the result can be different on your computer because of a different random number generator): 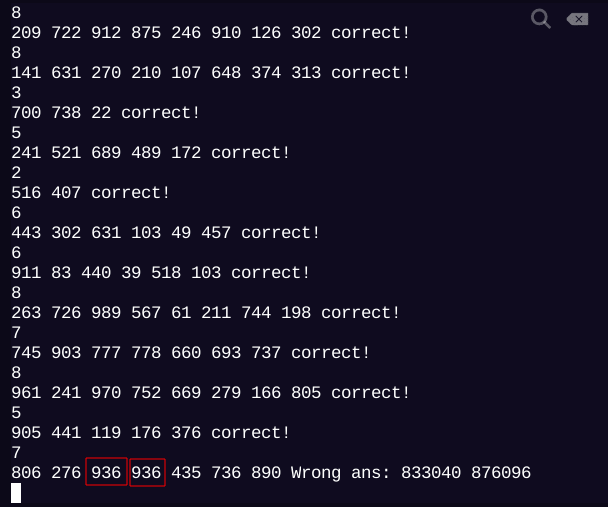 So, although, the first algorithm works correctly, it becomes really slow when dealing with very large datasets. The second algorithm, however, is fast but doesn't work for the above cases in stress test.

What should we do now??

Ok. We just need to go back to our optimized algorithm and check the process again. And .. here we go! The condition that checks the second largest number is the reason of the wrong result!

So, we are changing that code to make it correct.
Here is the final code:

Run the stress test again and wait for a minute until we get bored. You will see there's no different results anymore.

As for the final conclusion, even for such a simple problem like this, it is easy to make mistakes during algorithm designs and optimization. But practice makes perfect 😉. There are many ways to find the solution to this problem so I hope you can find more efficient algorithm than the example one.

Thank you very much for giving your time to read my post and please forgive me if my writing is too boring or too complicated. I'll try my best to write more blog post in the future 😃

Thanks for keeping DEV Community 👩‍💻👨‍💻 safe. Here is what you can do to flag heinkhantzaw: