Today I wanted to share an experience that I don't usually explain: the moment I created a videogames tournament that lasted 7 months, why it failed and finally, what I learned from it.

So, a videogames tournament

I've been a huge fan of videogames since my dad bought a PlayStation 2. My first game was The Lord of the Rings, after that I got my first Nintendo and fell in love with Final Fantasy (Tactics A2 and Revenant Wings), and then I found myself playing competitive League of Legends, Overwatch and Hearthstone.

Videogames meant so much to me my whole life. It wasn't just having fun, but connecting with people and making friends online.

In december, 2017, I had the idea of creating a videogames tournament, and I created some kind of planning.

How I started the big project

The first thing I did was searching for interested participants.

My first target were on League of Legends fans, because it was a very large community. I searched in forums, Twitter, Facebook and everywhere, and I found some teams interested in the tournament.

I personally interviewed those teams one by one, willing to know them, and I found, sadly, lots of individuals making fun of me for being a girl. I had to reject most teams for the same reason, and when they were rejected, they insulted me in private and in the game.

However, once I had some good teams interested, I went for phase 2: hiring people.

In that moment I was doing everything by myself. Contacting the teams, managing the social media, posting advertisements everywhere and doing the interviews, I also worked as a game analyst, but I was already so busy making things in the background and I needed people who made things in the front-side.

I posted more advertisements, searched in forums, in every social media, and even opened a form in case someone was interested in commenting the games or just controlling the teams personally.

Again, I received lots of insults, toxic answers and some individuals directly attacked the tournament in their social media publicly. I was even called "that bitch from the tournament".

Funny part was that I was being threatened most of the time with "I will report you to the tournament's organization". My sweetheart, I was the whole tournament organization.

Here I learned the first lesson: there will always be people trying to make you fail no matter what, even willing to lie to make others hate you, especially if they can't be part of what you're building.

I received every day at least 12-15 of these troll answers to the staff form: 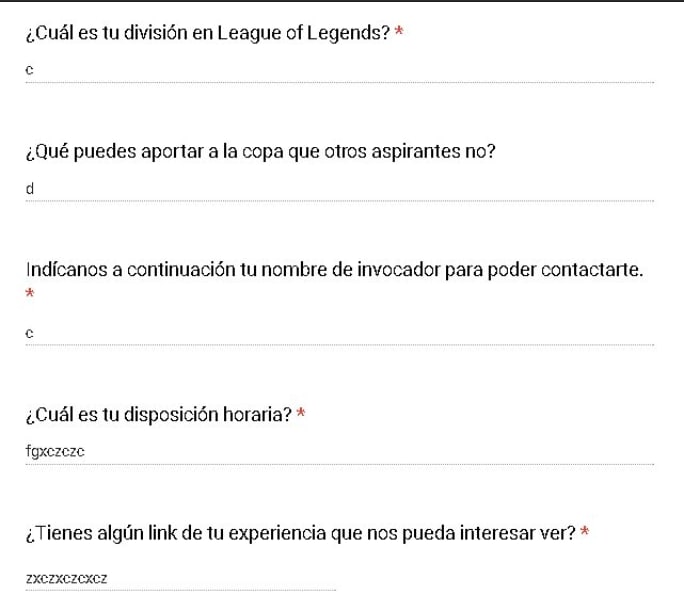 But, however, I finally found good workers to create a staff team. Of course, all of them were paid by me. We were a team of 5-7 people including temporary individuals that were only working when needed.

Okay, so I had participants, I had a staff team and I had social media presence, advertisements and a kind of large audience... Opened a Twitch channel, a YouTube channel, a Discord Server for the teams, organized my staff and... Ready to go.

My staff was awesome.

I've never worked with people that loved that much what they were doing. None of them failed to attend the meetings, the informative sessions or the job the day we had some teams playing.

Our participants, in the other hand... Started cheating. Even though we prepared lots of anti-cheating measures, we noticed some cheating and we had to expel some teams.

Moreover, most of the players started leaving their teams because of internal issues, and getting new players once being admitted inside the tournament was forbidden.

At the end, there were so few teams, and I finally decided that the best option would be to finish the tournament and close it.

I paid my staff, closed the social media, the webpage and put a " . " for the tournament, not really knowing if I ever would be willing to manage it ever again.

This was one of the best experiences in my whole life, yet it failed. And I don't feel bad or sorry about it, it was something I built with all my motivation and effort, and it lasted long enough to teach me lots of things.

Even though it was too much work and I really had bad experiencies because of being a girl, overall I'm so proud for everything I achieved back then.

I learned how to interview people, how to manage hard situations when you're being insulted publicly, how it is to be in charge for a whole organization, creating something big from scratch and all alone.

Also, I started learning how to manage internal problems between staff members and attending our participant's doubts and problems. It made me understand that everything can't be perfect and that there'll always be issues to attend to, and most important: be prepared to improvise.

I also learned that there are bad people willing for me to fail, and they will be there always. You can't scape from those that will try destroy you if they can't join you.

I felt so hated but also I felt incredibly happy of what I was doing. After 2 years I still think that I'd love to do something similar in the future, and I have no doubt I'd know where and how to start again.

I finally explained this experience, can't believe it!

Do you have a similar experience? Also found people in your way willing to destroy what you're building?

I'm pretty sure we all had to face these kind of situations at least once in our lifetime.

Thank you for reading this far, I'll see you in the comments!