Just about everyone who can is working from home now. And while we're lucky to work in an industry that already works from home regularly and easily, there are still some aspects of being in an office that are difficult to replace. One of them is the stand-up meeting.

Every Monday we have a quick status meeting with Heroku. (If you aren't familiar with Heroku, they are a PaaS company that helps you to deploy, manage, and scale apps.) I'm on the opposite side of the country as Jennifer, my counterpart at Heroku, and both of us typically use Zoom or Google Hangouts for our meetings. We're both used to having remote meetings, but both of us also have plenty of meetings that are still in-person, or at least used to be. So we wanted to try something more targeted towards our current situation, indicative of where we might be headed long-term, and something more fun! You know, something more “Ready Player One”-ish. So we decided to have our status meeting over virtual reality (VR).

Here’s how it went.

Setting Up Our First VR Meeting

We decided on VR a few days before our meeting, so I immediately started looking for possible apps we could use. I only found two that my Oculus Go supported: rumii and Altspace VR. I installed both VR worlds and did a quick walk-through. While both apps seemed usable, I couldn't get the PDF viewer to work with rumii, and it didn't support slides shows for the Oculus Go, so I decided to go with Altspace VR. Jennifer has an Oculus Quest, but Altspace works with all the major headsets.

When you first enter Altspace, you pop up inside your own furnished house. You have several rooms, a nice view over the city, and a basketball court where you can practice hoops (it’s really hard). It's much better than what I could afford in real life! 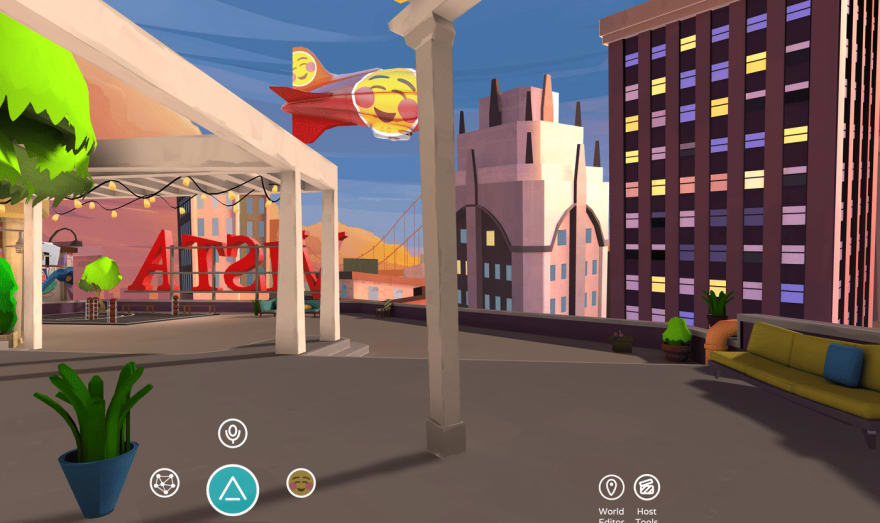 The view outside my house

There’s an in-game menu that floats with you at all times. This is your menu that allows you to chat with others, exit to the main menu, search current live events, and teleport to other VR worlds inside of Altspace.

To host my own private meeting, I had to first create my own "world". (Basically, I followed these instructions. You’ll need to do the same if you want to host your own meeting, as there are some details I won’t cover here.) Note: You have to enable the worlds functionality from your PC account in order to see the “create worlds” option on your headset menu; it’s a beta feature right now.

When you create a new world, there are several base templates you can choose from: a beach, a dance party, a game room, an auditorium, a park, and more. I chose—drum roll—the meeting room template. This template creates a typical conference room setting – a long table, a TV, several whiteboards, some private meeting areas, and a nice floor-to-ceiling-view of whatever sky you choose. (I changed mine several times, starting with Mars, moving to Sunset, and finishing with Nebula.) 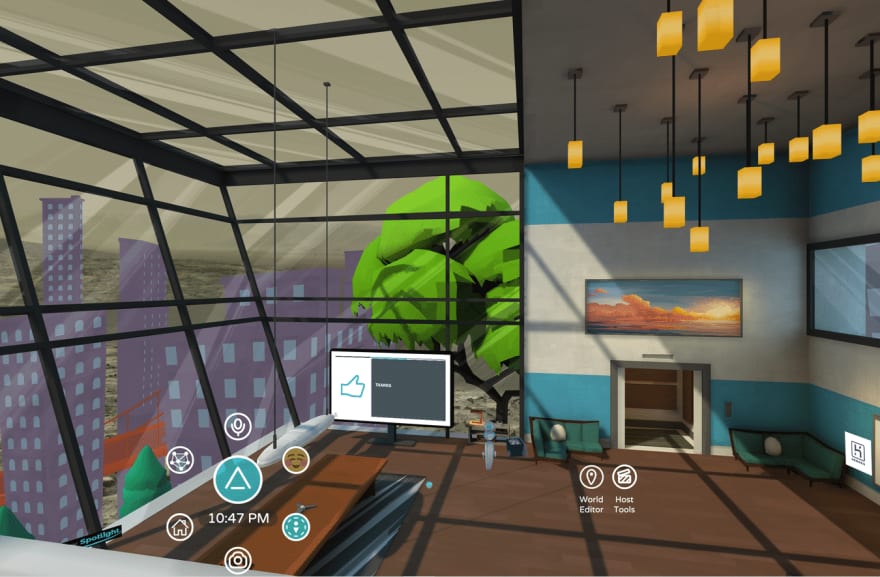 A bird's-eye view of our meeting room

It was a standard room to start, but I customized it a little with some of the available "items". For example, I used the picture item to add the Heroku logo: 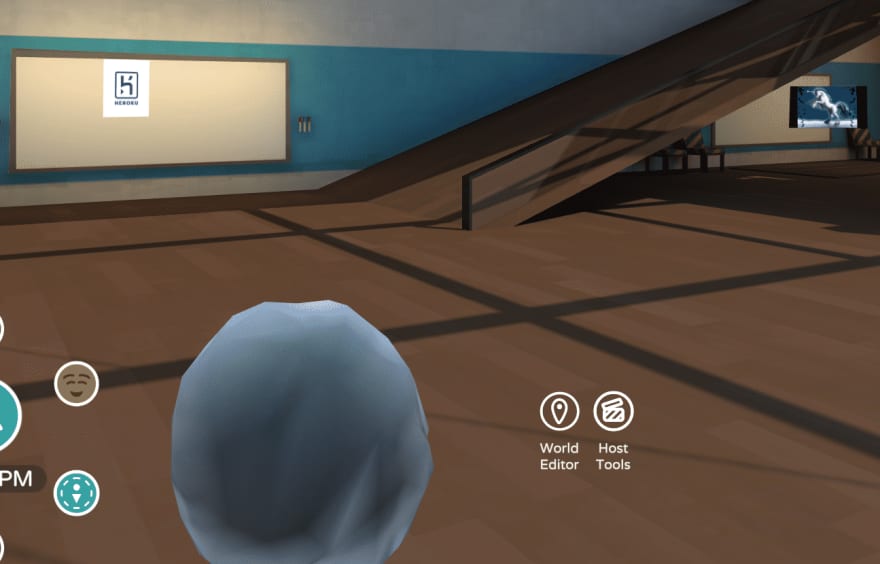 Heroku logo on one whiteboard, unicorn on the other, snowball in my hand.

There is a long list of pre-built items you can add to your room. Most of the items are static and don’t really do anything. Imagine a campfire just kind of floating in the air in the middle of your room. You can look at it, it's pretty, and it blocks your path when you try to walk through it, but that’s about all it does.

But some of the objects are interactive, and these are a lot more fun. I added two interactive items to our room, including a box of snowballs that you can actually throw (when someone says they missed a deadline, as an ice-breaker, or even just for fun) and a box of fireworks that you can actually shoot off (when someone says, Hey, our Zero Downtime CI/CD project is finally complete!) 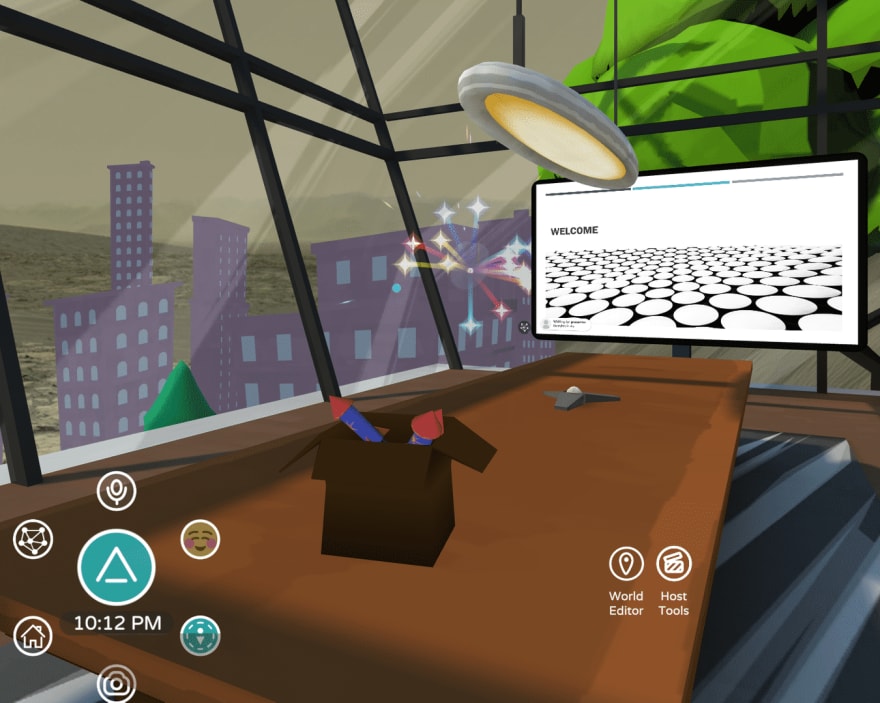 I found the TV in the corner of the room to be the most useful feature. Using this TV you can display slideshows. 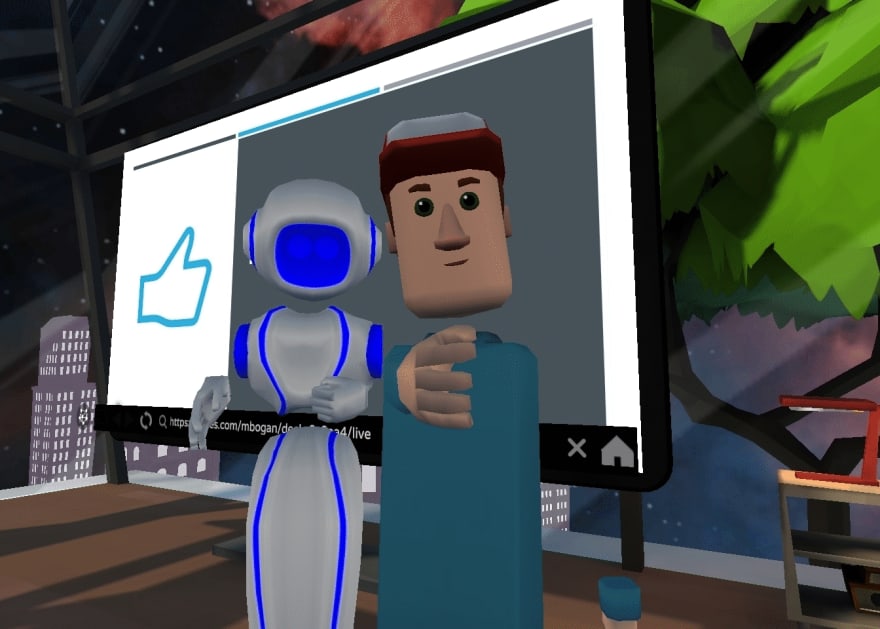 Selfie in front of the slideshow

You build your slideshow before the meeting using slides.com and connect it to your virtual world by entering the URL of your slides into the TV. The slides also support YouTube videos, though I didn’t try them.

To control the slides, you use your personal browser. Everyone in Altspace has a personal web browser that is visible only to you, and opens up on demand in your virtual space. 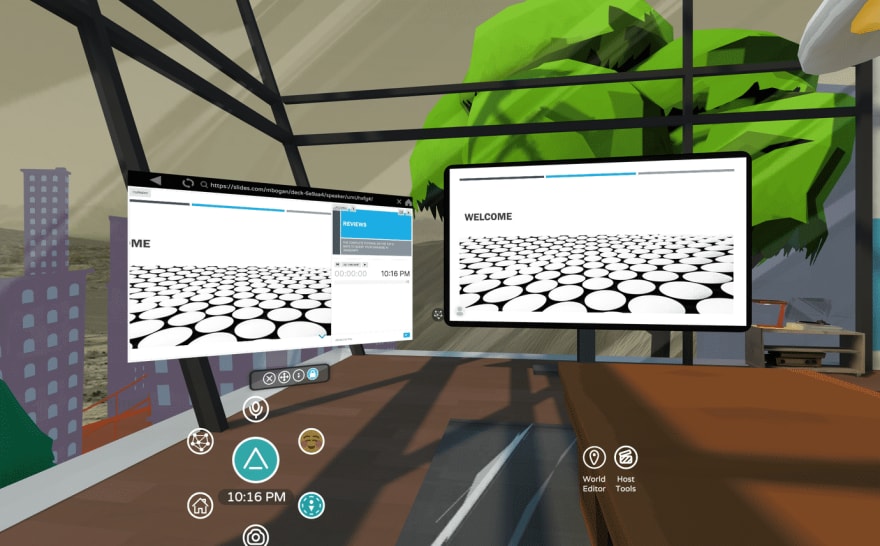 Personal browser "remote" on the left, TV with slideshow on the right.

You can use this browser to do the usual surfing, searching, and so on. However, you can also use it as a “remote control” for slides.com, controlling your slideshow on the TV. It was somewhat difficult to set up (again, follow these instructions). I had to do quite a bit of "put the headset on, change settings, take the headset off, read instructions.” But with some diligence I got the slides to work.

During the meeting you can also do fun little things like emote emojis from the top of your head and use one-on-one messaging features to have private conversations. 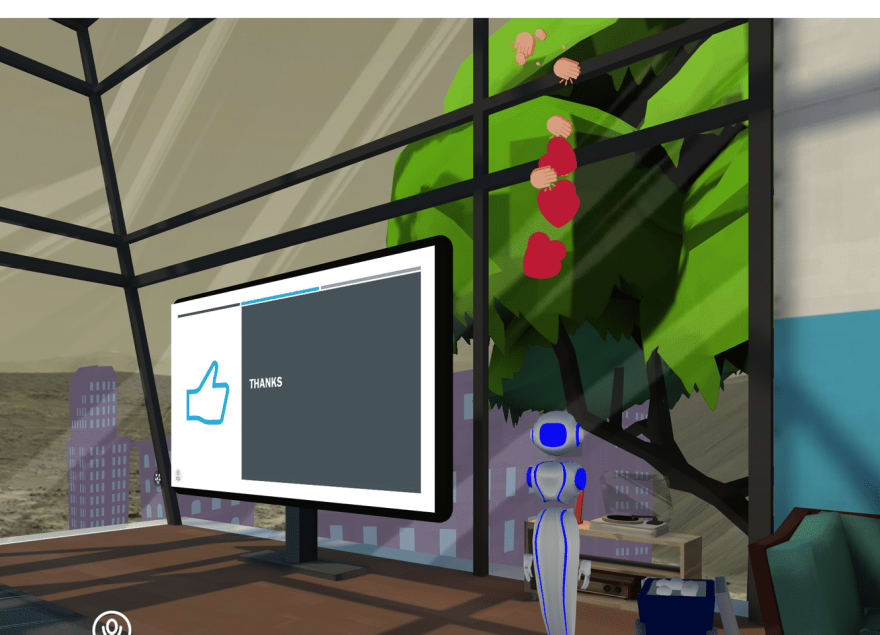 I had two main issues while setting up and hosting our meeting.

The first issue was actually getting both of us in the same room. You might think that would be easy, but it wasn’t. In order to invite someone to your room you first must add them as a friend – and neither one of us could get the "search for a friend" feature to work. It was probably user error, but we were never able to figure it out.

Instead, we finally figured out that if we were in the same room we could click on each other to send a friend invite. So we met in one of the public, easy-to-find rooms, and connected as friends. That worked great. However, Jennifer still couldn’t enter my custom room. After doing some digging, we eventually figured out that I had to add her to the "allow list" in my custom world setup, then reload the world.

The second issue was the inability to take notes. As I mentioned above, there were several whiteboards in the room, but sadly we couldn’t actually write on them. As a diligent note taker, this would have been a useful feature. Every time I wanted to record a note, I had to flip up my headset and write in my real-world notepad. This was a pain, literally and figuratively, as headsets don’t really flip up. So I had to push it up over my eyes, which pressed my glasses against my head in all sorts of painful ways. But my short-term memory is terrible, so taking notes was a must.

Having the VR Meeting

Those problems aside, once we started the meeting, it went quite smoothly, and was actually fun! I presented my slides, we discussed some upcoming Heroku features, planned future work with Lightning Web Components, and created a few action items for our next meeting. Really, it was a typical in-person, stand-up status meeting, except the two of us were both at home in self-quarantine on opposite sides of the country.

Overall, the virtual status meeting was a hit. The VR world itself reminded me of early AOL chat rooms. (I know, I’m showing my age.) It was filled with an eclectic, and somewhat sparse, assortment of early adopters. Lots of people were wandering around the public rooms, unsure of what exactly they were supposed to be doing. When you enter a VR world for the first time, you’re amazed at the experience; it's like nothing you’ve seen before. However, after an hour or so, you’re left with a kind of "Okay, but now what?" feeling. Like the early internet with chat boards, the platform is still figuring out what it is best used for beyond chatting. For example, I stumbled into one world that was a lively, but strange, Cards Against Humanity game filled with a group of hyper, talkative, and sometimes rude people—just like an old school chat room.

But the private room and the status meeting felt like a natural use case, even during the first experience. Unlike with Zoom or Skype, it actually felt like a real in-person meeting. I had a sense of privacy that I don’t have with video meetings. No one was staring at me and I didn’t feel pressure to look at someone. The focus was on the meeting, the slides, and the content. Overall, it felt more relaxed and natural.

Like any new format, the VR status meeting required a few adjustments, but by the end of the meeting I was comfortable. I think with time, a few feature improvements, and an increase in the prevalence of headsets, VR will become the preferred way to have remote meetings.

For an industry that has always embraced remote, but now may be forced into more fully adopting remote, VR could be the answer. This was early tech, with several bugs, and was difficult to figure out at times (even for a technical person like me). It took us the majority of an evening to set up that first meeting, but it was a great experience overall. I think VR may gain traction not just for status meetings, but also for (the now taboo) large-group meetups and conferences.

The current quarantine will surely change our lives, in some ways temporarily, and in other ways permanently. Some technologies will be pushed into usage faster than they would have otherwise. We may finally see movies first released on streaming rather than in theaters. We may see remote schooling become the norm. And once we figure out that even large corporations can effectively have employees work full-time from home, will we still feel the need for expensive offices? Will we continue to pay for business-class, cross-country flights? Maybe. However, many of us will likely easily adjust to working from home, will not return to an office, and VR conferences and meetings may become mainstream.

We’ve planned our next meeting for the same room. This time we’ve given ourselves some new roles I found on a menu: musician and pilot. I’m not really sure what any of that means, but we’re excited to find out!