In today’s article, we are going to deal with sparse files. You’ll learn about their pros and cons, and the file systems that support such files, and how to create them, or turn ordinary files into sparse ones. 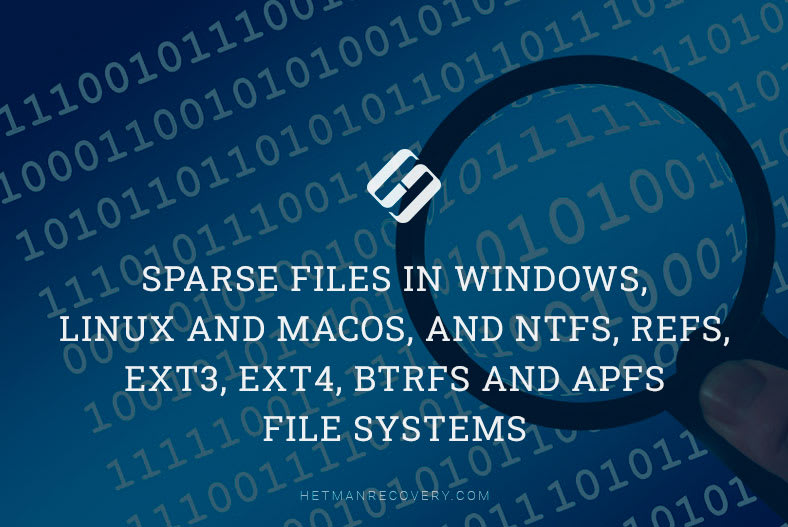 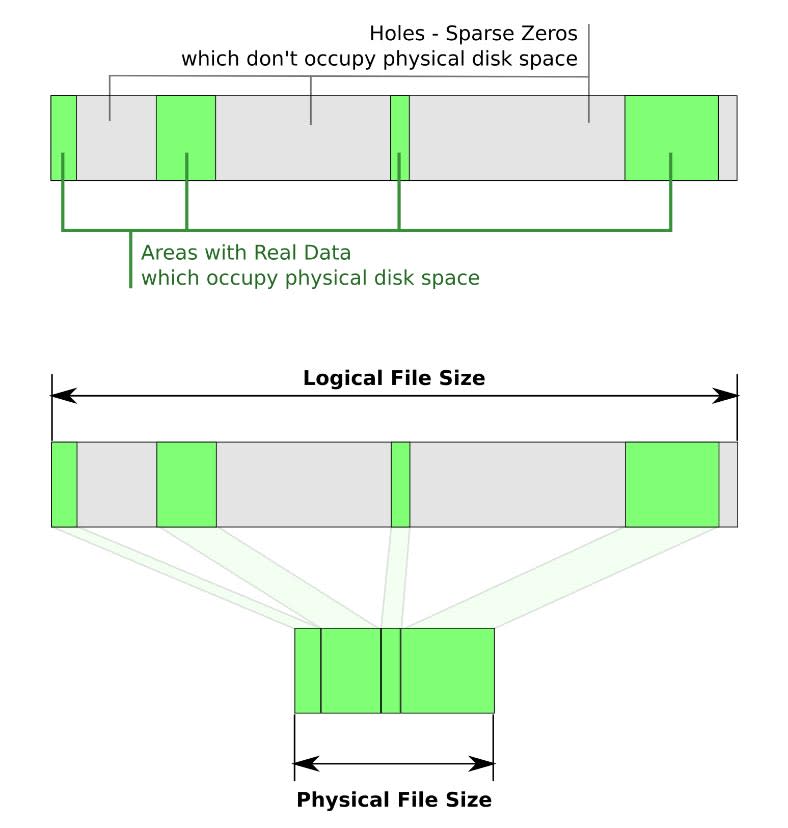 All these file systems support this type completely, but at the same time, they don’t provide any direct access to their functions through the standard interface. You can manage their properties with the command prompt only.

The difference between compression and sparse files

All file systems I have mentioned before also support the standard feature of compression. Both tools give you the advantage of saving disk space, but they achieve this goal in different ways. The main downside of using file compression is that affects system performance when reading or writing such files because the system needs extra resources to compress or decompress the data. However, some software products don’t support compression.

The biggest advantage of sparse files is that users can create very large files which take very little disk space. The space for storing data is allocated automatically as more and more information is written. Large sparse files are created relatively quickly because the file system doesn’t have to pre-allocate disk space for writing zeros.

However, the advantages of sparse files are limited to the applications that support them. If a certain program cannot recognize or use such files, it will save a sparse file in its original – uncompressed – form, and there’s no advantage to talk about. Users have to be careful when dealing with such files: a sparse file of a few megabytes may suddenly turn into a several-gigabyte monster when an application that doesn’t support this file type copies it into a directory.

One more disadvantage is that you can’t copy or create a sparse file if its nominal size exceeds the amount of available free space (or quota restrictions applied to user accounts within the operating system). For example, if the original size of a sparse file (with all of its zero bytes) is 500 MB, and the quota limit for the user account where this sparse file is created is only 400 MB, such situation generates an error, even if the actual disk space occupied by this sparse file is only 50 MB.

As to the hard disks where such data is stored, they are also subject to fragmentation, because the file system will write data to sparse files as and when necessary. Over time, it may result in reduced performance. Besides, some disk management utilities may have issues with displaying free disk space. When the file system containing files of this specific type is low on space, it may lead to unpredictable situations. For example, it may generate disk overfill issues when data is copied over the existing part of the file which is marked as sparse.

Creating a sparse file in Windows

In Windows, we’ll be using the command prompt for this purpose. Type “cmd” in the search field and run it as Administrator.

In Windows, sparse files are managed with the help of fsutil tool (a file system utility). When the command create is performed, by default it creates a file that is not a sparse one. Go to the folder where you need to create a file and type the following: 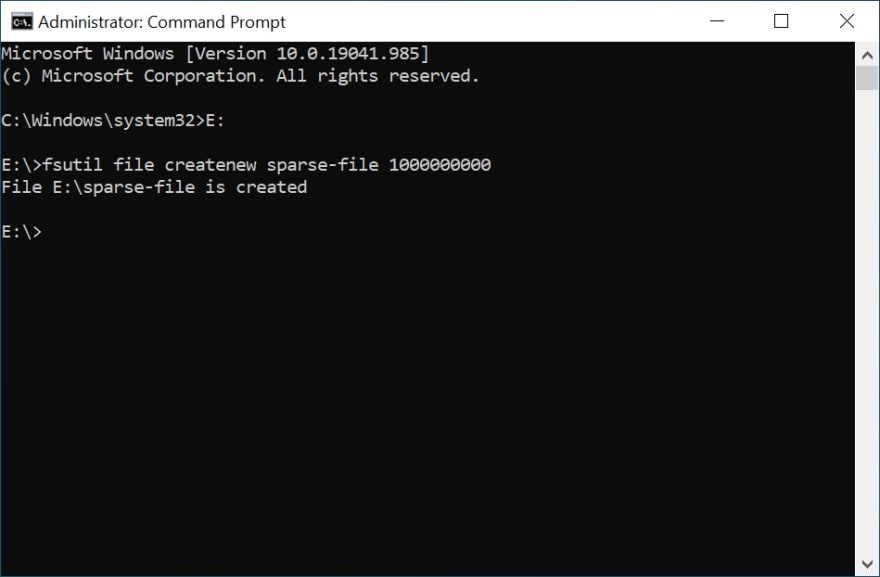 To assign the “sparse” attribute to the file, use this command: 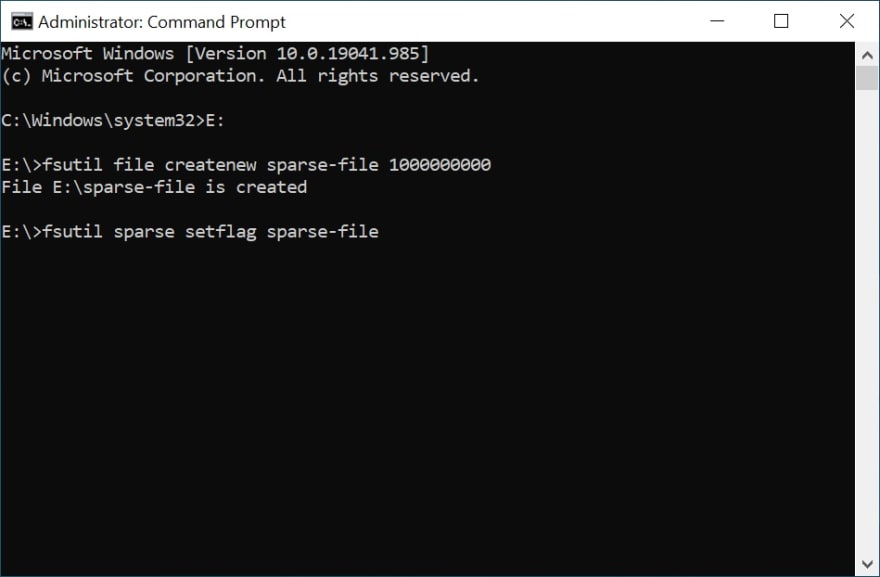 Here is the command to remove this attribute: 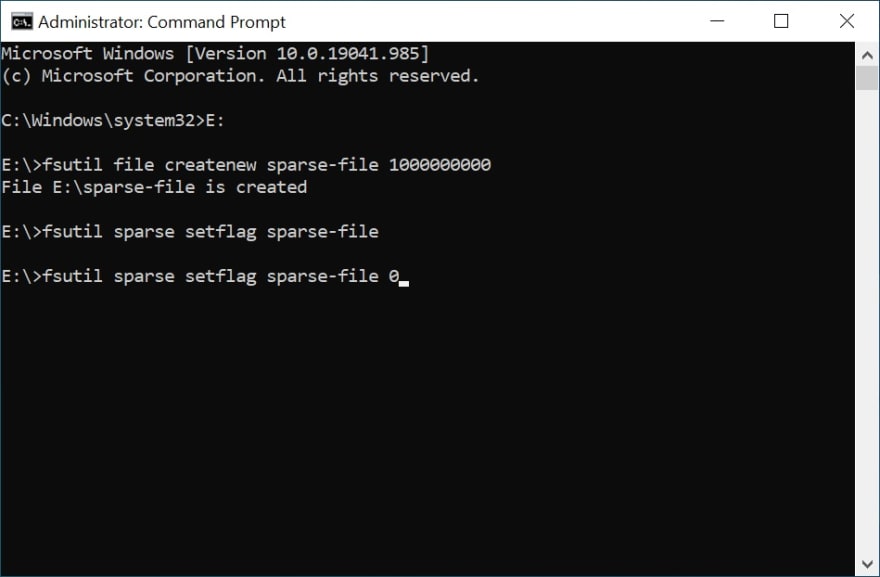 And here’s another one if you want that attribute back: 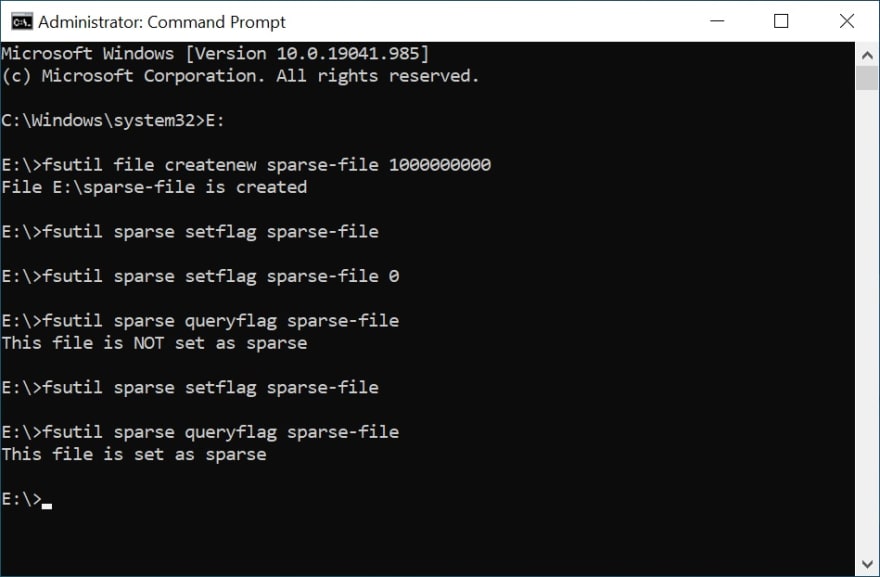 The attribute by itself doesn’t let you start saving disk space. To make it happen, you need to set the empty space which should be freed inside the file.

Type this to set the empty space: 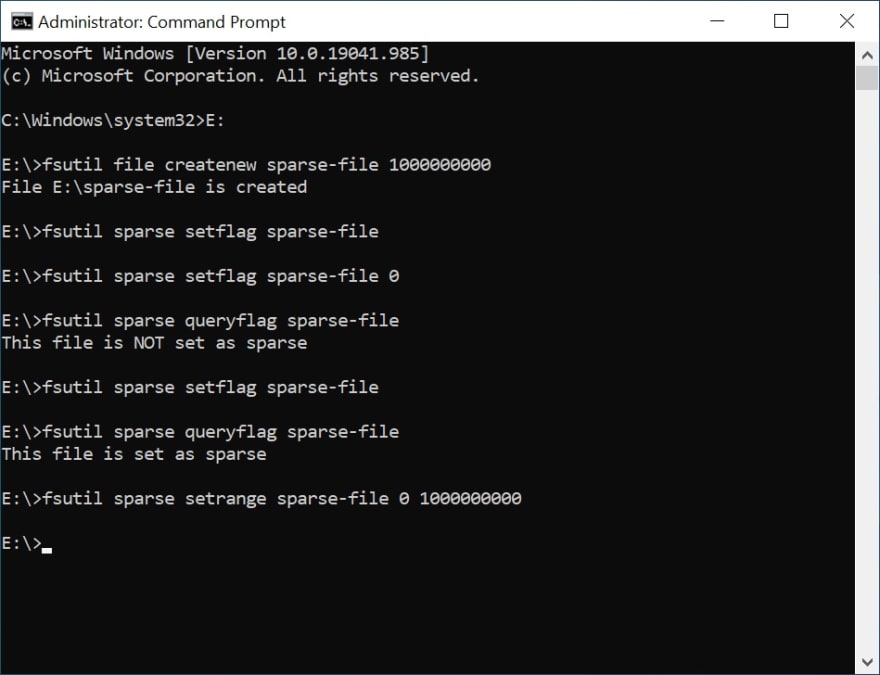 At the end of the command, the offset and length are given in bytes. In my case, this is the range from zero to 1 GB.

To set a fully sparse file, specify the whole capacity. You can expand the file if necessary by typing a larger value.

To make sure the file has been assigned this attribute, run the command layout 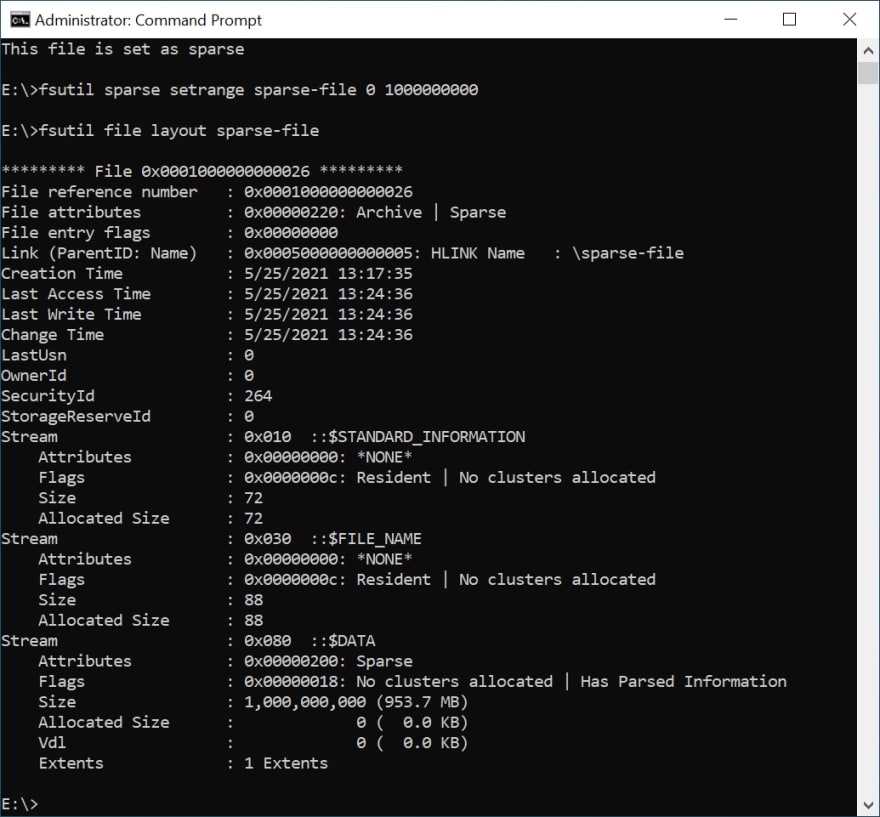 The sparse attribute can be assigned to any file by just running this command with the corresponding file’s name.

In the properties of the file we have created earlier, you can see that with the size of 1 GB this file occupies 0 bytes on disk.

This set of commands works with all Windows file systems that support sparse files (NTFS, ReFS, and so on).

How to create a sparse file in Linux

In Linux, the process of creating such data types is a bit easier, because there are several commands to create them. They work fine with all Linux file systems.

Here, you can use either command: dd, or truncate.

Where “file-sparse” is the file name, and the number at the end is the size that can be set in bytes, megabytes, and so on. 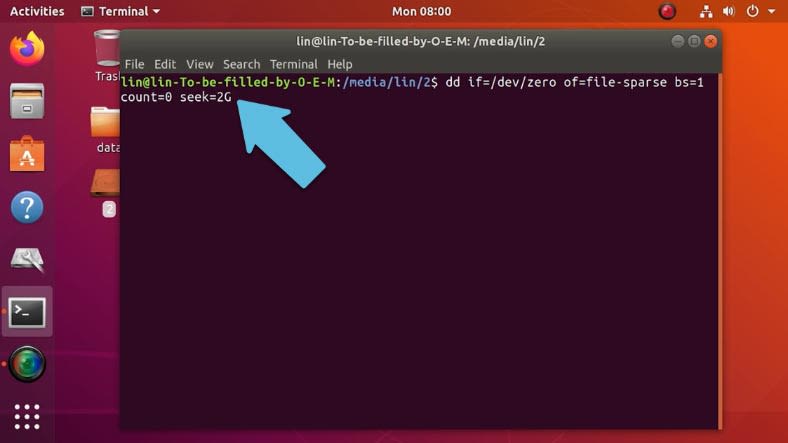 The second command is simpler:

Where the “s” value stands for the file size, and it is followed by the file name. 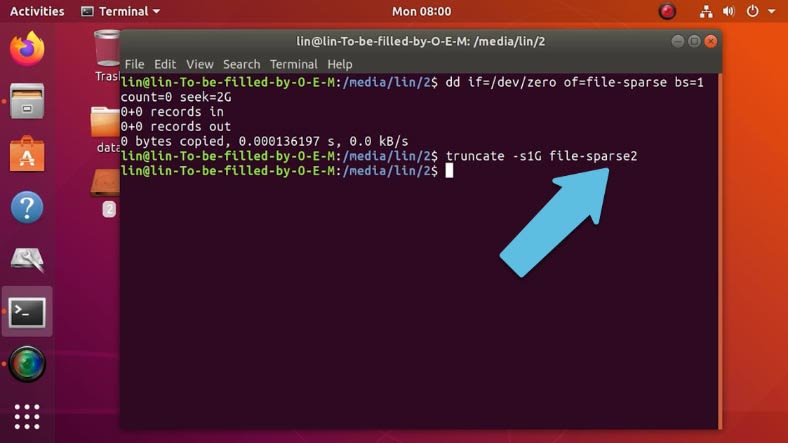 Contrary to Windows, when you create a file with either command it will be a sparse file by default.

To turn an ordinary file into a sparse one, there is a special command:

Where 025.jpg is the name of the first file, an ordinary one,

and 026.jpg is the name of the second file, a sparse one. 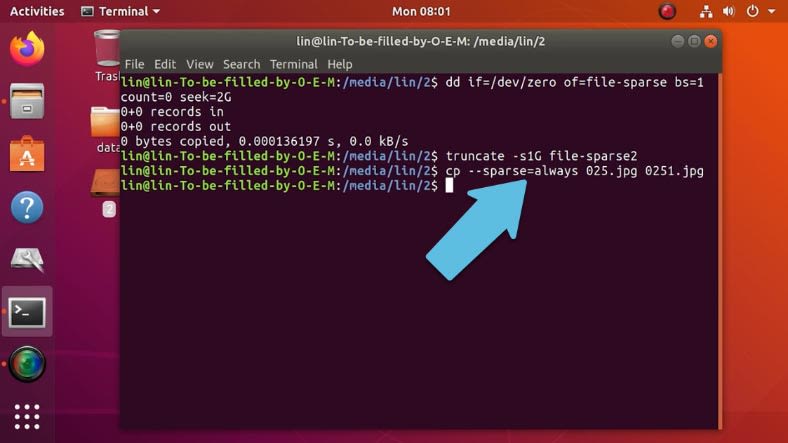 How to expand a file
If you need to expand an existing file, use the first command below: replace the name and specify the size you need.

This command will increase its size to 2 GB. 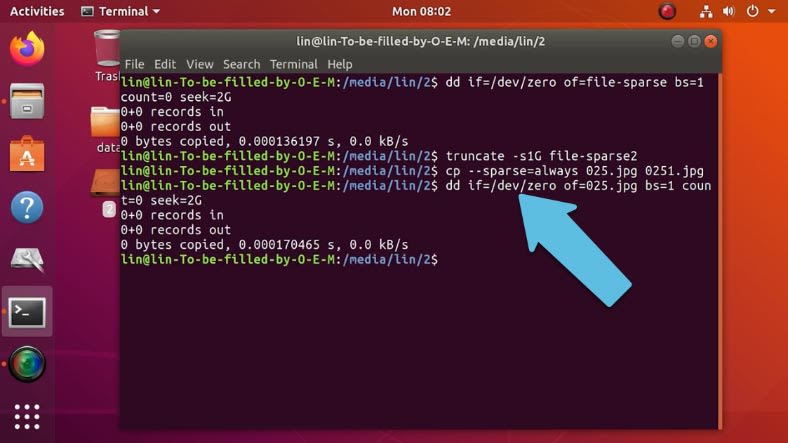 Use the following command to check the size:

In fact, this set of commands also works with the Apple file system – ApFS, as Linux and MacOS are based on the Unix core architecture and they both provide access to Unix commands and the Bash command shell.

Launch the Terminal and run any command for creating a sparse file that I have just used in Linux.

In MacOS Catalina, only the first command is supported, and the size should be given in bytes, otherwise the command will generate an error. 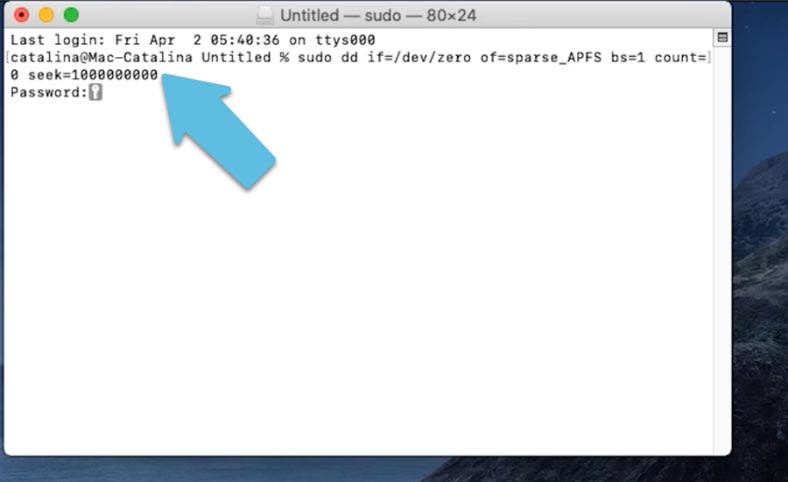 When certain conditions are observed, the ApFS file system creates sparse files by default, so you can expand any file with the command used to increase the size of sparse files in Linux:

Let’s set the size of 500 MB, and remember that in MacOS this size should be specified in bytes.

When you run the command and open file properties, you can see that its size has increased to 500 MB.

Helping you to build your Personal Brand in Tech

How to install Figma on Linux