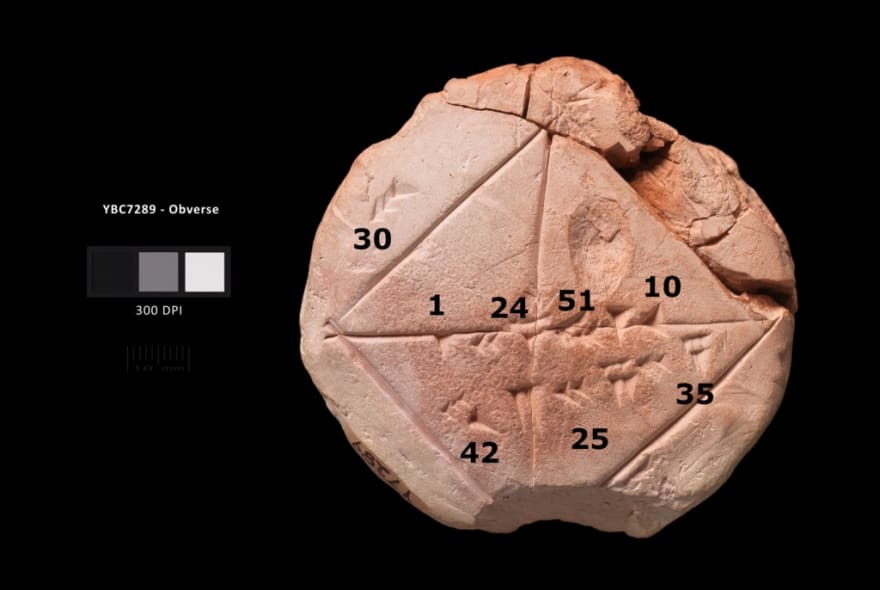 When thinking about the history of anything the question we like to ask is, where do we begin? Frustratingly and very often the answer is, we’re not sure. And the origins of mathematics is no different.

History doesn’t burst forth from a single point like the big bang. Instead it emerges slowly from the fog in various places. This is why there isn’t a great deal of value focussing on historical figures like Pythagoras or Euclid. While important historical figures they weren’t the the start of mathematics. Nor were they the only people solving mathematical problems 2,500 years ago. And in the case of Pythagoras they may not have been a mathematician at all.

So what do we know about mathematics? Well thanks to Euclid and many others we know mathematics was being used, discussed and written about two and a half thousand years ago in Greece and the Eastern Mediterranean. We also know, thanks to the Suàn shù shū and other documents, similar things were happening in China around the same time. So what was happening in the Eastern Mediterranean certainly wasn’t unique.

There’s also evidence of mathematics well before the Greeks. Babylonian mathematical clay tablets can be dated back to the late second millennium BC. Also there’s evidence the Babylonians knew Pythagoras' Theorem at least 1,000 years before the great man was born.

Obviously saying there is no evidence for something is very different to saying something doesn’t exist. One thing to consider though, is it possible for any complex society to exist without mathematics?

For instance ancient Britain is often presented as a grossly ignorant place. Until the enlightened Romans turned up. However there is plenty of evidence of complex society and culture in Britain during the 1st, 2nd and 3rd millennia BC. Also Britain wasn’t isolated from the rest of Europe either, there is plenty of evidence of travel between Britain and the continent.

Then of course there is the question of Stonehenge, constructed during the 3rd millennium BC. Could a society and culture build something so big and complicated while utterly ignorant of mathematics? Was religious zeal and brute force alone enough? We don’t know as there is no written documentation on the construction of Stonehenge. But one has to wonder how it was done, and magic probably isn’t an adequate answer.

Complex structures we also being built in Mesopotamia and Egypt as far back as the late 4th millennium BC and early 5th millennium BC. Again, while we have no written evidence, is it like likely this could be done without mathematics?

Human society began to settle and urbanise around 10 to 15 thousand years ago. The question we’d like to answer is, at what point during this emerging social complexity does mathematics enter the picture? The honest answer is we don’t know.

So what does this mean for the origins of computers and software? Well the question is, what tools were developed to aide early societies in calculating and solving complicated problems? Not a question to be answered now, but one imagines it is closely linked to the origins of mathematics.

Use VS Code 💡😆 to check in with yourself