tl;dr : View the chart at the bottom for a quick rundown between the top 3 privacy-focused analytics platforms.

I have a huge problem with Google Analytics. The idea is that you get free analytics on the users of your site in exchange for sharing those analytics with Google. All that data is getting matched with other site data all over the web. You're essentially giving away your user's personal data to Google so that it can be used against them. Not exactly a fair, or ethical, trade.

Originally, I built my own analytics platform for RoutineHub, but I found over time that it was hard to maintain, and probably wasn't filtering out bad data. So I did some research and found that there are a few privacy-focused analytics platforms out there doing exactly what I'm looking for. I trialed three of these platforms simultaneously to see which one works best for my needs. Here are the results.

Plausible is a single-person project built by Uku Täht launched in April of 2019. Even though it's only been out for a short period of time, it boasts some interesting features.

One thing I've had a problem with is that the data doesn't match up with my timezone completely. I've reached out to Uku about this, and he's pretty easy to get a hold of and is working on fixing the issue.

The price-point is much less than the competitors which makes it a great way to get into basic privacy-focused analytics. You can track as many sites as you want, the tiers are based on number of page-views.

Simple Analytics was launched in September of 2018 by Adriaan van Rossum. He has added a couple other people to the now 3-person team.

The data points Simple Analytics stores are pretty much the same as Plausible, except they don't have unique visitors. They probably are trying to make it more anonymous, but there are ways to check for uniqueness without storing actual IP addresses.

I do really like that they have an API. Having that access is nice for if you need granular data for your users.

I also like that they have support for a custom domain. This means you can have the analytics requests coming from within your own domain which helps lessen the amount of traffic getting stopped by ad blockers.

Simple Analytics is the most expensive compared to its competitors. All tiers have unlimited amount of sites.

Fathom is a project built between Paul Jarvis and Jack Ellis and launched in April of 2018. Out of the three analytics platforms discussed here, it's been around the longest.

Fathom has all the normal data points you would need, plus some extra ones that I find very useful. For instance, being able to see where current users are coming from right now is a handy feature. If you have a huge spike in traffic, you can see where it's coming from and act accordingly. Some other good data points are average time on site and bounce rate.

Fathom's pricing is right in the middle of the other two services. You can track as many sites as you want, the tiers are based on number of page-views.

Obviously there are going to be some difference in analytics numbers, but I found some interesting discrepancies between the three.

I found these differences quite interesting. Simple Analytics seems to be more on the conservative side, but this is probably because some ad blockers block it. Plausible and Fathom have around the same amount. I'm not sure which one is more accurate. All three are less than the amount my own system was recording, probably due to filtering out spam and other bad requests.

Here are the screenshots that this data is coming from: 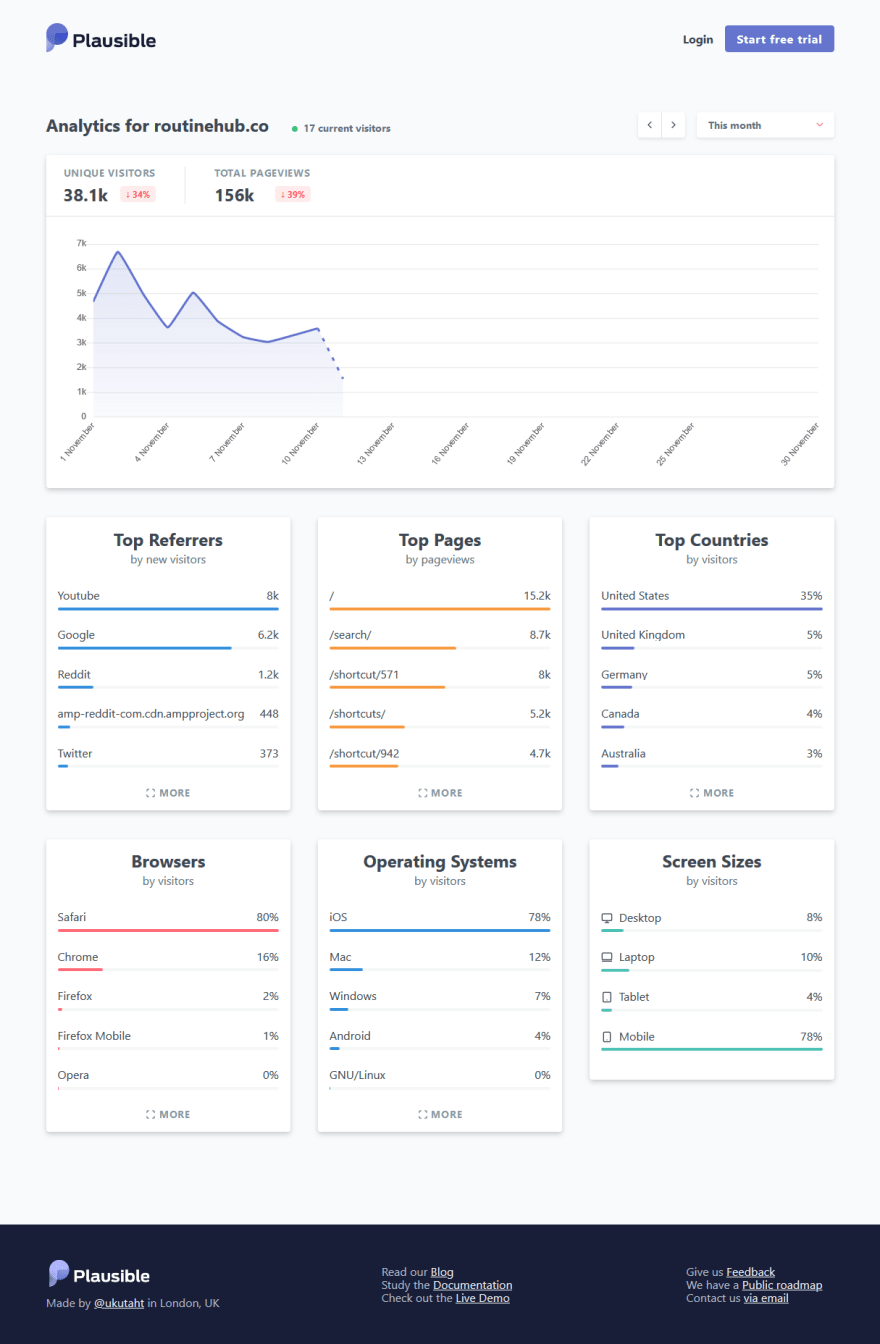 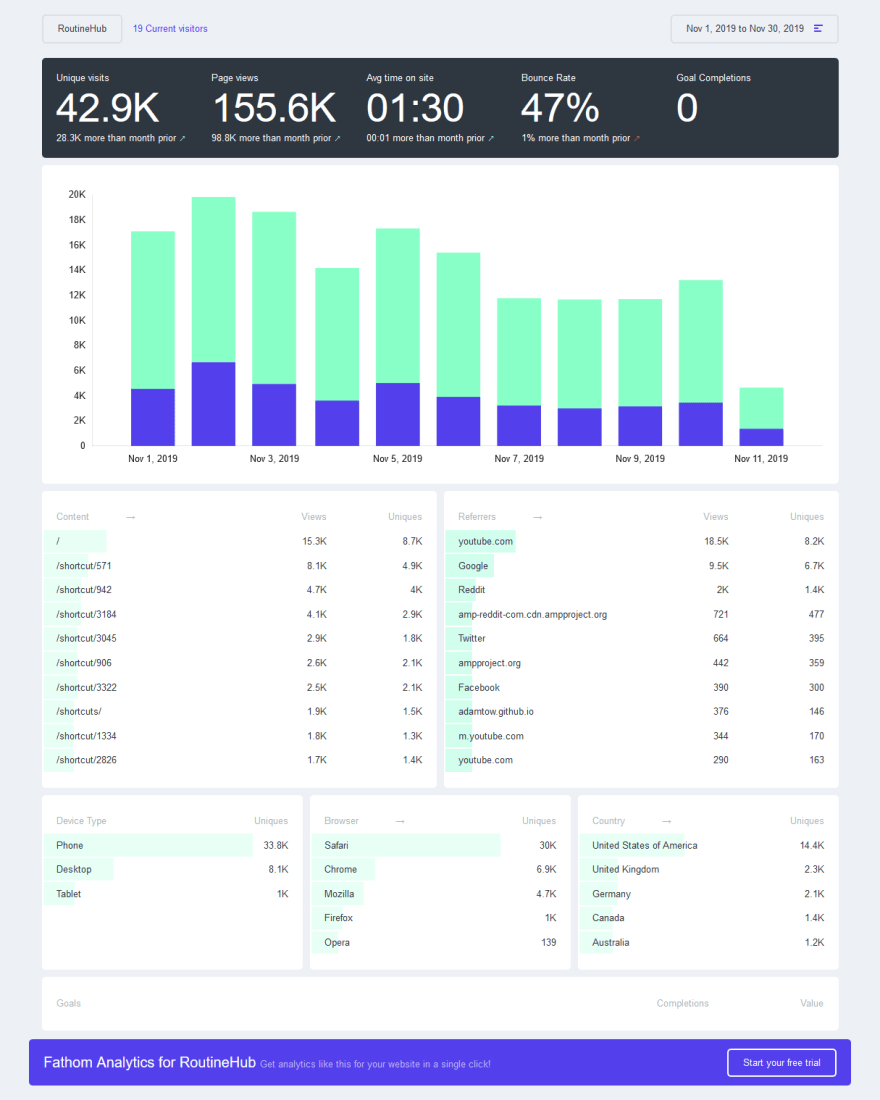 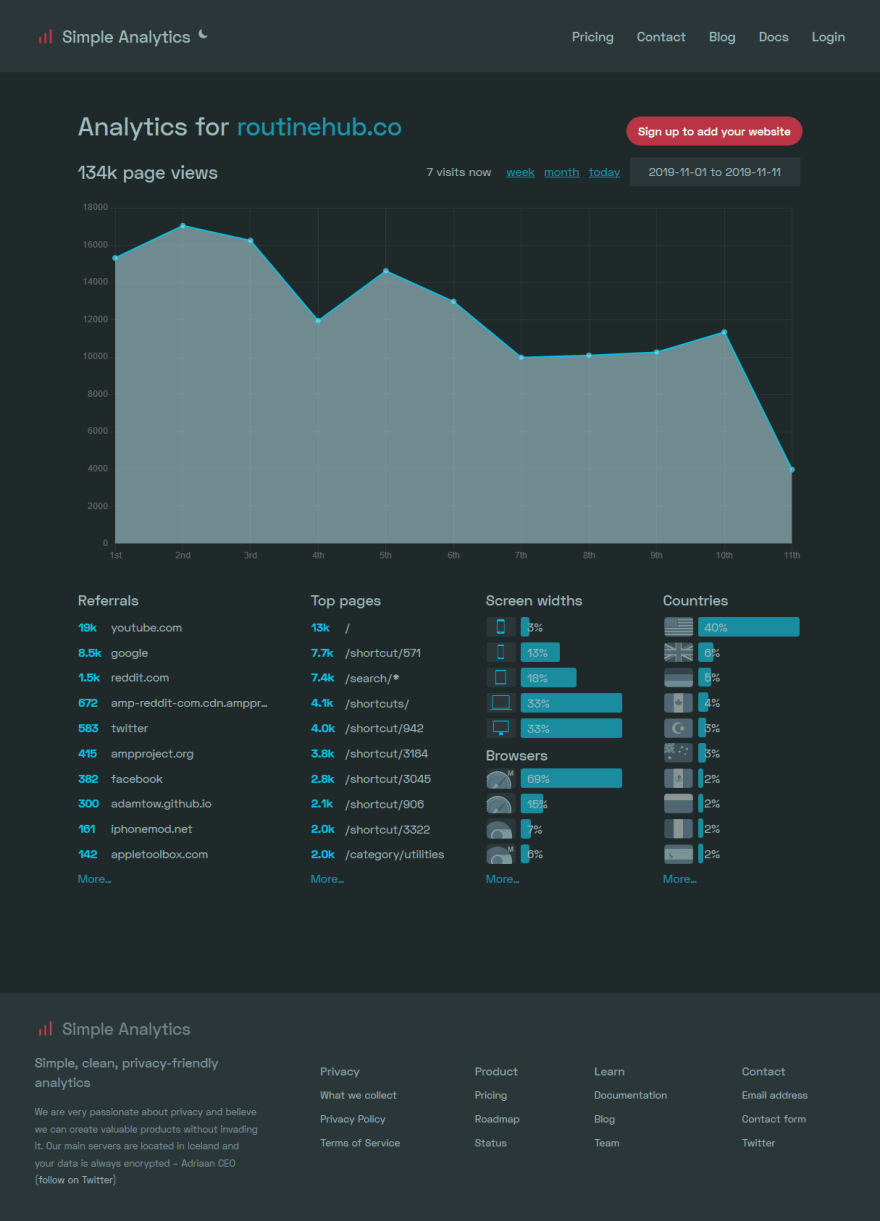 All three have their pros and cons, as you can see from the chart below. However, for the price and it's feature set, Fathom seems to be a good fit for my site. Google Search Keywords and custom domain support would both be nice, but I can live without them for now. Current visitor details, average time on site and bounce rate are all killer features that help me make better decisions.

Simple Analytics are a bit too simple for me at the moment for its price point, but the roadmap looks very positive.

Plausible is really affordable with its price point, but it doesn't have quite as many features as the other two platforms.

If you're just starting out or have a smaller budget, Plausible is a great choice. If you're looking for more data and can spend a little more, Fathom is your best bet.

Tips for working with private files in laravel

How to set up Google Tag Manager on Shopify (+2022 Updates)

Connecting via FTP on MODLR

Harley Hicks
I'm the creator of Routinehub (https://routinehub.co) and 500 Mile Email (https://500mile.email).
Meme Monday
#discuss #watercooler #jokes
Do you remember the FIRST project made by you?
#discuss #showdev #webdev #programming
Why We Hate…
#career #culture