This article was originally written by Ayooluwa Isaiah on the Honeybadger Developer Blog.

An overview of Go tooling

Tooling is generally considered one of the stronger aspects of the Go ecosystem. The go command is the gateway to many of the tools that will be discussed in this post.

By learning about each of the tools discussed here, you'll become much more efficient when working on Go projects and perform common tasks quickly and reliably.

The go env command is used to display information about the current Go environment.
Here's a sample of what this command outputs:

If you want to view the value of a specific variable, you can pass them as arguments to the go env command:

The documentation for each of the variables can be accessed using the command below:

Assuming you have a main.go file with the following code,

You can run it using the go run command, as we've already seen several times in this series:

The go run command compiles the program, creates an executable in your /tmp directory, and executes this binary in one step. If you want to execute several files at once, you can pass them all as arguments to go run:

Or you can use a wildcard:

If you've been writing Go code for any length of time, you will know that there are strict conventions for how code should be formatted. The gofmt command is what enforces these conventions for all Go code in existence.

The code snippet shown in the previous section was not formatted properly, so let's format it with gofmt, as demonstrated below:

This formats the code in the source file and prints the result to the standard output. If you want to overwrite the source file with the formatted output, you need to add the -w flag.

To format Go source files recursively (current directory and subdirectories),
specify a . as the argument to gofmt.

Before you can use a package in your code, you need to import it. If you fail to do so, the code will not compile, and an error will be displayed. Given the following code in your main.go file,

You should see the following error if you attempt to execute the program:

Before the code can compile, the fmt package must be imported. You can add the necessary code manually or use the goimports command, which adds the necessary import statements for you.

The command also removes any imported packages that are no longer referenced and formats the code in the same style as gofmt. So, you can also think of goimports as a replacement for gofmt.

The value of goimports becomes apparent if you set your editor to run it on saving a Go source file. That way, you won't need to worry about importing a package before using it or importing statements that are no longer needed. It'll be done automatically for you as soon as you save the file. Most code editors have some sort of plugin or setting that should help with this.

To build an executable binary for your program, use the go build command. This will output a single binary in the current directory:

The binary produced with go build is specific to your operating system architecture, and it contains everything you need to run the program. Therefore, you can transfer it to another machine with the same architecture, and it'll run in the same manner even if Go is not installed.

If you want to cross-compile a binary for an architecture other than your own, all you need to do is change the values of the GOOS and GOARCH environmental variables before running the go build command.

For example, the following command can be used to produce a binary for a 64-bit Windows machine:

To compile for Linux, macOS, ARM, Web Assembly, or other targets, please refer to the Go docs to see the combinations of GOOS and GOARCH that are available to you.

The go install command is an alternative to go build if you want to be able to run the program from outside its source directory.

Assuming your main.go file is in a directory called demo, the following command will create a demo binary in your $GOPATH/bin directory.

The $GOPATH should be $HOME/go on most computers. You can check it with the
go env command:

If you list the contents of $GOPATH/bin, you should see a demo binary:

This binary can be executed by running the demo command from any location on your filesystem. This only works as long as the $GOPATH/bin directory has been added to your $PATH.

The default invocation of go list returns the name of the import path for the directory you are currently in or the provided package path:

We can customize the output of the go list command using the -f flag, which allows you to execute a Go template that has access to the internal data structures of the go tool. For example, you can list the name of the fmt using the command below:

That's not very interesting on its own, but there's more. You can print all the dependencies of a package using the {{ .Imports }} template. Here's the output for the fmt package:

Or, you can list the complete set of transitive dependencies for a package:

You can also use the go list command to check for updates to dependencies and subdependencies:

Or, check for updates to a specific dependency:

There's a lot more you can do with the go list command. Make sure to check the documentation for flags and other template variables that may be used with the command.

Displaying documentation for a package or symbol

The go doc command prints the documentation comments associated with the item
identified by its arguments. It accepts zero, one, or two arguments.

To display the package documentation for the package in the current directory, use the command without any arguments:

If the package is a command (the main package), documentation for exported symbols are omitted in the output, except when the -cmd flag is provided.

We can use the go doc command to view the docs for any package by passing the import path for the package as an argument to the command:

If you want to view the documentation for a specific method in a package, simply pass it as a second argument to go doc:

A second command, godoc, presents the documentation for all Go packages (including any third-party dependencies you have downloaded) as a webpage. Running the command will start a web server on port 6060 by default, but you can change the address with the -http flag. 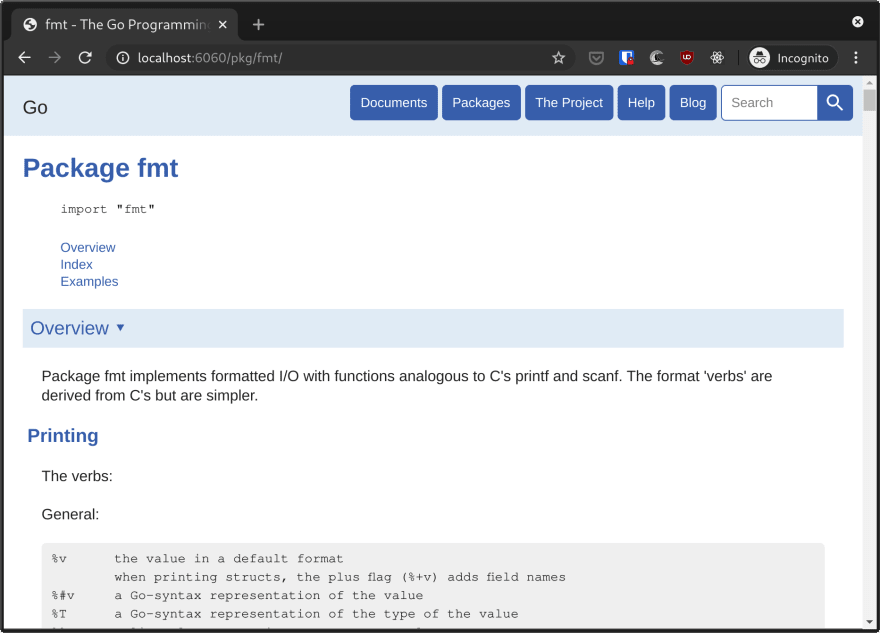 The go vet command is one that helps with detecting suspicious constructs in your code that may not be caught by the compiler. These are things that may not necessarily prevent your code from compiling but will affect code quality, such as unreachable code, unnecessary assignments, and malformed format string arguments.

This command is composed of several analyzer tools, which are listed here, with each one performing a different check on the
file.

All checks are performed by default when the go vet command is executed. If you only want to perform specific checks (ignoring all the others), include the name of the analyzer as a flag and set it to true. Here's an example that runs the printf check alone:

However, passing the -printf=false flag to go vet will run all checks except printf.

Adding dependencies to your project

Assuming you have Go modules enabled, go run, go build, or go install will download any external dependencies needed to fulfill the import statements in your program. By default, the latest tagged release will be downloaded or the latest commit if no tagged releases are available.

We covered Go modules in detail in part 2 of this series. Here's a summary of the commands you need to know to work with modules effectively:

Testing and benchmarking your code

Go has a built-in testing command called go test and a testing package, which can be combined to provide a simple but complete unit testing experience. The test tool also includes benchmarking and code coverage options to help you profile your code even more.

Let's write a simple test to demonstrate some of the capabilities of the test tool. Modify the code in your main.go file, as shown below:

Then, add the test in a separate main_test.go file in the same directory:

If you run go test in the terminal, it should fail:

We can make the test pass by modifying the return value of the welcome function in the main.go file.

Now, the test should pass successfully:

If you have lots of test files with test functions but only want to selectively run a few of them, you can use the -run flag. It accepts a regular expression string to match the test functions that you want to run:

You should also know the following test flags, which often come in handy when
testing Go programs:

To view your code coverage status, use the -cover flag, as shown below:

You can also generate a coverage profile using the -coverprofile flag. This allows you to study the code coverage results in more detail:

You will find a coverage.out file in the current directory after running the above command. The information contained in this file can be used to output an HTML file containing the exact lines of code that have been covered by existing tests. 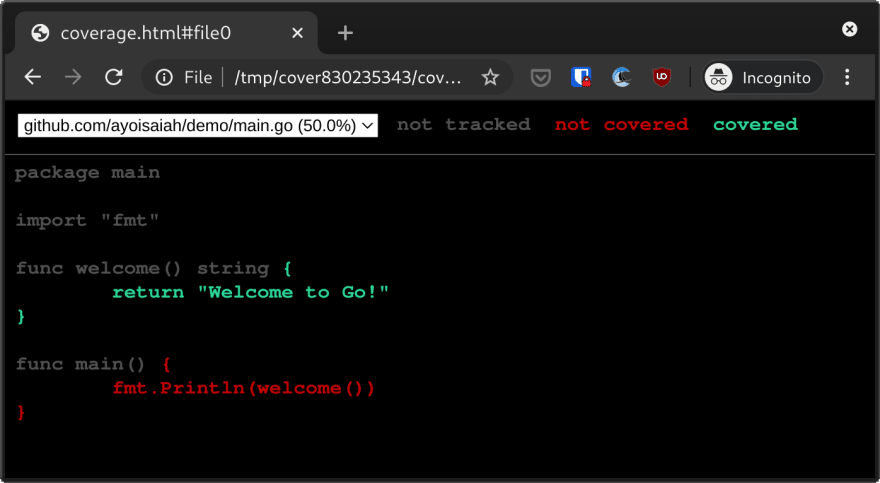 The benchmarking tool in Go is widely accepted as a reliable way to measure the performance of Go code. Benchmarks are placed inside _test.go files, just like tests. Here's an example that compares the performance of different string concatenation methods in Go:

This benchmark can be invoked using the go test -bench=. command:

A race detector is included with the go tool and can be activated with the -race option. This is useful for finding problems in concurrent systems, which may lead to crashes and memory corruption.

In this article, we covered several tools included in each Go environment and provided
short descriptions of how they can be used. This is only the tip of the iceberg, so be sure to check out the full documentation for a deeper explanation of the capabilities of each command.

Thanks for reading, and happy coding!

Setup Go with VSCode in Docker and Air for debugging