Modal is simply an interactive window that hides the principal page to provide the user options according to his action.

For example, given a list of items with a delete button for each row, when the user clicks the delete button, a modal appears requiring the user to either confirm his choice (delete item) or close the modal. As you may notice, modal interaction is a great choice since it offers a nice user experience.

In this quick tutorial, we will try to build a custom reusable modal with angular, which makes it easy to maintain and reuse.

To build this modal we need 3 main elements 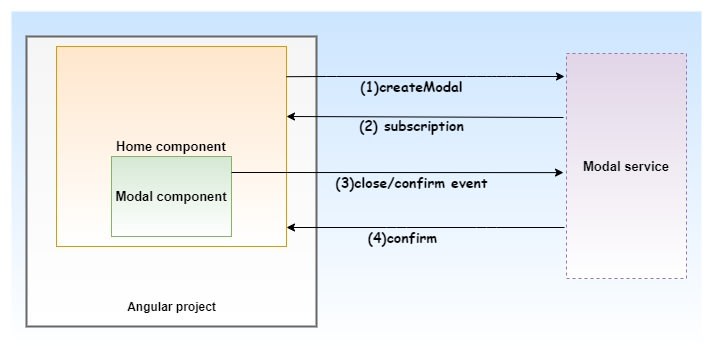 NB: At the end of each section, you find the code associated with.

Our service will hold 3 methods:

openModal : which is responsible for creating modal and add it to a specific component (hosting component).

closeModal : which is responsible for destroying modal, after the user clicks on the close button.

confirm : which is the event triggered when the user clicks on confirm button, it emits "confirm" to hosting component.

Our service will hold 2 private attributes:

componentRef : which keeps track of the modal created.

componentSubscriber : which is a subject returned after the modal created. it is responsible for sending events to the component holding the modal.

let's dig deep down in our methods:

entry: which is the modal container (where the modal is going to appear) of type viewContainerRef.

viewContainerRef represents a container where one or more views can be attached to a component.

modalTitle: which is the modal title.

The question here is how to create a modal component, and add it to the modal container ? 😳

componentFactoryResolver is a simple registry that maps Components to generated ComponentFactory classes that can be used to create instances of components.

We injected this class ( ComponentFactoryResolver ) in service constructor, and we created a componentFactory ( factory ) in openModal method.

After modal instance created, we are able then to provide the modal by title input, body input, and subscribe to different output events ( closeMeEvent , confirmEvent ) to handle them in user interaction.

Then, in this method we return a subject as observable, this observable is useful to the hosting component to be notified of user interaction with the modal ( "confirm" ) to do specific logic.

This method is simple, it is responsible for destroying the modal and complete the subscriber. Hosting component is not concerned by this event.

Hosting component, is the component where the modal is going to be created. Home component in our example.

This component must have a HTML reference element representing the modal container, and the event triggering modal creation ( createModal ).

The host component is responsible for providing modal service by viewContainerRef (entry). To get this view we use @viewChild decorator with the reference element specified in the view(#modal).

@viewChild is a property decorator that configures a view query. The change detector looks for the first element or the directive matching the selector in the view DOM

This component is responsible also for subscribing to modalService openModal to listen for events streams. If it receives "confirm", our logic will be executed.

That's it ! your modal is working fine. 💪

In this tutorial, we proposed a general pattern of how to implement a modal in angular, which consists of three elements:modal component, modal service, and hosting component.

Hope it is clear and helpful. Comment below for any suggestions, clarification or issues.

Waiting for your feedback concerning this pattern ✌️.

Why You Shouldn’t Forget to Improve your R Programming

Once suspended, hssanbzlm will not be able to comment or publish posts until their suspension is removed.

Once unsuspended, hssanbzlm will be able to comment and publish posts again.

Once unpublished, all posts by hssanbzlm will become hidden and only accessible to themselves.

If hssanbzlm is not suspended, they can still re-publish their posts from their dashboard.

Once unpublished, this post will become invisible to the public and only accessible to Hssan Bouzlima.

Thanks for keeping DEV Community safe. Here is what you can do to flag hssanbzlm:

Unflagging hssanbzlm will restore default visibility to their posts.