SwiftUI made a surprisingly good first impression. Of course, things get more complicated as soon as you want to build something actually useful. Tables are a fundamental part of many macOS applications. How can we build them in SwiftUI?

Apple pushes the SwiftUI List pretty hard. It's great for iPhone GUIs. It is woefully inadequate for the desktop. Compared to the old AppKit NSTableView it is a children's toy.

You can certainly build tables out of List, using rows of HStack views. My test case was the Draft Rugby Player Stats table. Using draft-sport-swift to source the data, List gave me something approaching serviceability: 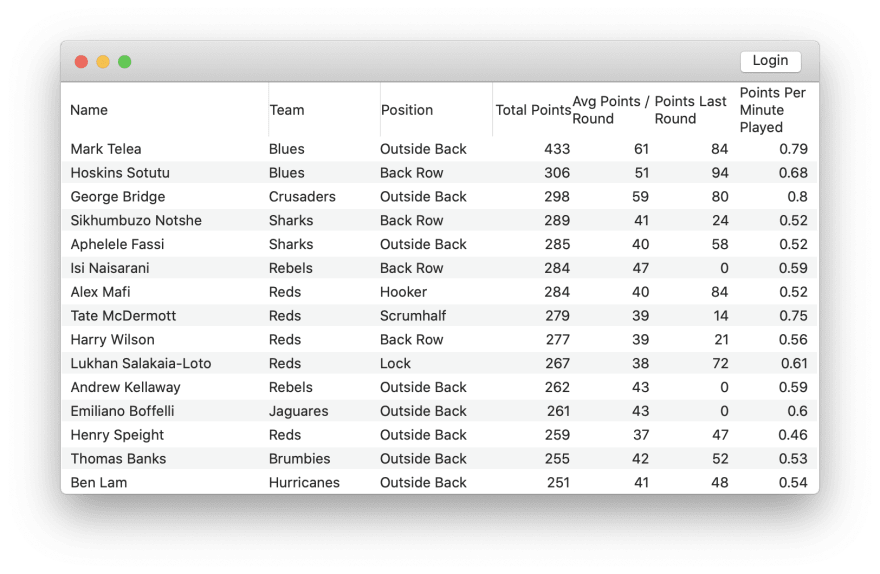 In code, it's not pretty. Lots of manual column-width calculation. Manual row banding. Manual row formulation in a dedicated row view. In the end, it involved writing lots of code to get something that approximated the aesthetic of an NSTableView, but without all the functionality that NSTableView includes.

Creating an NSTableView also involves writing lots of code. However, you get a lot of bang for your buck. Ideally, we could slap an NSTableView straight into our SwiftUI app. Fortunately, we can!

SwiftUI is all about View implementations. AppKit is all about NSViewController, NSView, the relationships between them, and a bunch of other crap. NSViewControllerRepresentable is the bridge between the AppKit and SwiftUI worlds. It is itself a View conforming protocol, and can be passed around in SwiftUI like any other View struct.

Create a struct conforming to NSViewControllerRepresentable, and add the required protocol stubs. Observe the tangled mess that results:

There's a lot to unpack here. Never fear, the only bit you really need to care about is the body of makeNSViewController(). Inside the body, you will see return PlayerNSTableController(). That's the key: Initialise the NSViewController subclass you defined in Step 1.

We're obviously going to want to manipulate the AppKit table data from SwiftUI. In the above NSViewControllerRepresentable implementation, you will notice the line @Binding var players: Array<Player>?. This is a bridge passing data between the SwiftUI and AppKit worlds.

Like any other struct conforming to View, PlayerNSTable may observe changes to its properties and update the GUI in response. The magic sauce is the @Binding decorator. Now, when .players is changed, the .updateNSViewController() method of our NSViewControllerRepresentable is called.

Inside .updateNSViewController() we can do whatever we like. I happen to expose a .refresh(:Array<Player>) method on my PlayerNSTableController, which ultimately calls .reloadData() on the underlying NSTableView. It's up to you how you want to feed new data into your NSViewController / NSTableView pair.

Step 4: Add your wrapped AppKit view to a SwiftUI view

You can now add your NSViewControllerRepresentable implementation to any SwiftUI View. Here's my implementation, PlayerNSTable, being added to an enclosing View:

Note that when PlayerNSTable appears, Player data are retrieved via the retrievePlayers() method. As with any other SwiftUI View, changes to @State decorated properties are observed. When Player.retrieveMany() executes its callback closure, the .players property is updated. This update ultimately triggers the updateNSViewController() method we discussed in Step 2. 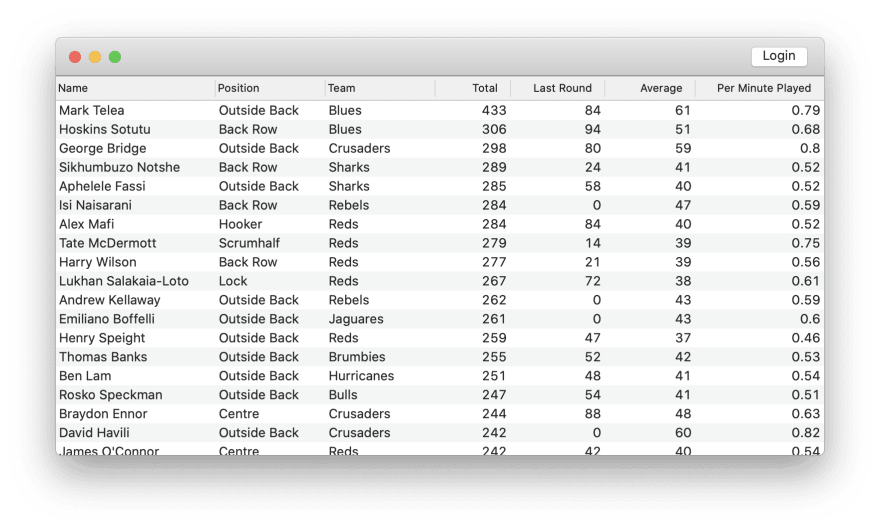 A fully functional NSTableView inside a SwiftUI View hierarchy. Phew! That was intense. If you have any questions, find me @hugh_jeremy on Twitter.

Creating a png of Your Memoji Contact Photo (the easy way)

Connect to a Private network via proxy server from macOS