Along with the power and benefits of dependency injection, there is at least one problem that can be illustrated as follows. 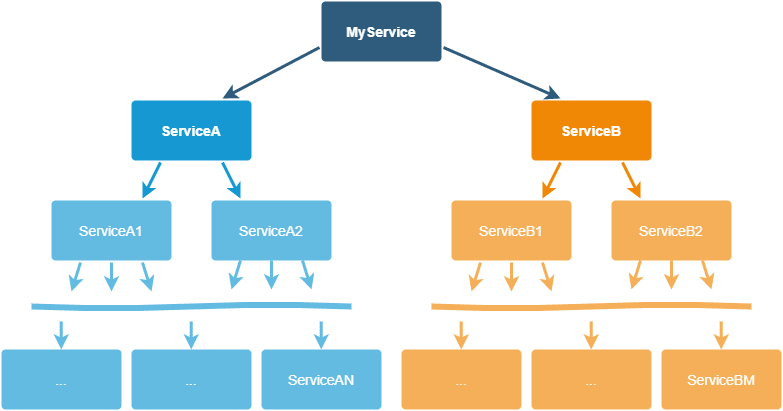 All these services are registered in an IoC container by corresponding interfaces:

The MyService service has the following implementation:

The DoWork method uses either ServiceA or ServiceB depending on the value parameter. The important thing is that the method does not simultaneously use both services, but only one of them.

Consider this example of using the MyService service:

In this case, only ServiceA needs to be used. However, when resolving MyService from the container, both ServiceA and ServiceB will be created as well as all other nested dependencies. Thus, instead of instantiating (1 + N) services, all (2 + N + M) are created.

The following example illustrates another case where only part of the dependencies is used:

When calling the DoWorkA method, only ServiceA is used. ServiceB is not needed in this case, but it was still created when the MyService service resolving from the container:

Of course, the examples given are too simple for real life and are given only for clarity. However, in practice, often, similar situations arise.

To summarize, the problem with dependency injection is that it creates multiple instances that are not even used when the method is called. It leads to:

This problem can be solved in several ways.

The specified problem becomes negligible if the services are registered in an IoC container as singletons. In this case, the problem only affects the first resolution of the service. However, in many cases, making all services singletons is a rather problematic task, especially for legacy code.

In some cases, the service can be divided into dependencies by reducing responsibility and methods. For instance, in the second example above, the DoWorkA method and the DoWorkB method could be divided into different services. But this approach may not always help, as can be seen from the first example above when the DoWork method uses a condition by value.

Sometimes, combining several services into one can reduce the depth of the dependency tree nesting. It is especially helpful when services are overly segregated. However, this can negatively impact code reusability and testability.

Instead of injecting services, some use different service locators. However, this is considered to be an anti-pattern that breaks encapsulation, so ideally you want to avoid it.

Inject Lazy<T> Instead of T

Using Lazy<T> rather than the T solves the indicated problem.

The implementation of the first example changes as follows:

In this case, two Lazy<T> instances are created when the MyService service is resolved. (1 + N) more services are resolved only when the DoWork method is executed with the value == 1 (as in the example above). In total, instead of (2 + N + M) created instances, only (3 + N) are created.

The difference is more significant, the more dependencies the MyService service has, and method branches use the more specific services.

The downside of this approach is that it pollutes the code with Lazy<T> and someServiceLazy.Value making it less readable.

LazyProxy solves the above problem without requiring you to change your service code at all.

This library allows you to generate at runtime a type that implements a given interface and proxies all members of this interface to calls through Lazy<T>.

Assume there is the following interface:

Then a lazy proxy type can be generated this way:

The generated type hides all of the boilerplate code of using Lazy<T>. So, LazyProxy can eliminate the main disadvantage of lazy injection but keep the main advantage.

Generating a proxy type at runtime is only half the battle. It is necessary to register this type in the container somehow and preserve the ability to resolve a real type when calling _service.Value. This can be achieved in several ways.

Here is a simple example of how a proxy type and a real type can be registered in the Autofac container:

Another way is generating an additional marker interface at runtime that will implement the main interface and be used to register and resolve a real service.

There are already ready-made libraries for some IoC containers that implement the described approach.

Here is an example of how to use this library:

There is also an implementation for the Unity container named LazyProxy.Unity.

The syntax is similar to the previous example:

Dependency Injection is a powerful tool and standard for achieving quality code. However, it has the disadvantage that multiple instances are unnecessarily created. It negatively affects performance and memory consumption.

There are several solutions that you should use whenever possible to mitigate the negative impact of dependency injection.

One solution is using the Lazy<T> injection instead of T. However, such injection pollutes the code, so this use is not recommended.

Moving from Visual Studio to VS Code as a .NET Developer