After several days of observing almost nobody at my work heeding any mind to the comparatively easy protocol of social distancing, I couldn't help but think: How nice would it would be to simply have an alert, a simple beep, that would be just enough to make them at least consciously think and choose to break protocol if nothing else. For some reason it took some time to realize this could be brought to fruition in the real world in any sense but eventually I did the unthinkable and forced my computer to open Android Studio

Quite simply, make an app that can detect other instances of itself running on nearby devices. At a certain distance a warning tone plays, at a shorter distance (2m most likely) an alarm plays

Yes, similar apps exist but almost all rely on a stable data connection and uploading your location to a database rather than inter-device communication 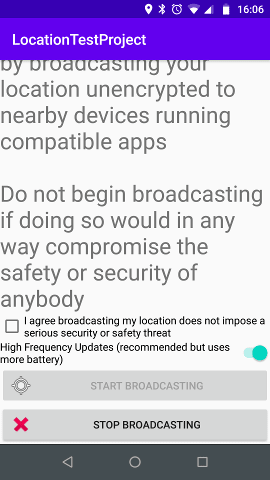 Today the app IS functional and available for download but rather than the initial vision of hyper-accurate distance measurements and 2-tiered alarm system plus an "all-clear state", its functionality has been limited to playing 2 tones:

This was legitimately the original plan: Make an inaudible tone every second, on the second and per my calculation, if another device heard a tone between .0001 - .0055 sec of a tick on a perfectly accurate clock, it must've come from another device too close

I didn't expect to get as far as I did, but in fact Audacity is perfectly capable of producing these tones and despite the fact I couldn't hear it, they could be played between the computer speakers and a USB mic recording to show a measurable difference in amplitude between room noise and the "silent" tone

Great! What an easy app to develop! Well, actually this had 2 problems:

This is a technique I may investigate at a future date now that a certain level of imprecision is baked into the app but at the time it was a dealbreaker, especially because of the app's second limitation:

I'm not gonna call the Titanic unsinkable, say the War will be over by Christmas or declare social distancing apps to be of no use in 2021 but let's all hope that latter statement ages the best. Either way, every epidemic and pandemic so far has had an end date

Why does this change the design? Well, it means I have to work with the tools at hand and do some cost-benefit analysis on time invested learning a new library vs creating my own custom stuff

Luckily, Google's Nearby Messages API was a decent fit and didn't cause TOO many headaches

I've spent more than enough time yelling at Google Maps to justify having an attorney on retainer just in case it becomes litigious but something that never seems to be an issue is precision. Many odometers have concurred with its assessment of my distance to any given turn. Problem is you don't drive in 2 meter increments

Having only sold half my soul by tapping into GPS data but not uploading the location to a database, the phones were still acting unpredictably: Alerts going off on opposite ends of the apartment, stopping next to each other and switching states without either one moving it was clear I needed some output on how far they THOUGHT they were

Realizing even Google hasn't cracked the level of precision on their phones I was trying to leverage, this truly felt like a deathblow

#1: Nobody is coming into the jungle to save you

This app was my first foray into mobile development and the tendency to replace clear, ubiquitous words like "Element," "Page" and "State" with the most abstract synonyms possible like "View," "Activity" and "Context" was only one of the earliest stumbling blocks

Somehow I managed to get pinned between complications regarding permissions, notification channels, multi-threading and foreground service complications all at once in the final stretch

I'd make frequent pleas for help in Discord servers, forums, Reddit basically anywhere that would allow it and was likely to be populated by experienced Android developers. Each post was something along the lines of: "So close but so confused, please help"

Not one helpful response. In fact, most included references to documentation I'd clearly followed, accusations of blindly copy and pasting code and, in some cases, both(?)

But with Android being the Ikea of software documentation, the 1-4 missing pieces of information on each page were more likely to exacerbate the problem than solve it

But all the coding prowess in the world wouldn't help without a second epiphany:

#2: You can't change the hardware

After reeling from the blow of discovering how large the GPS drift was, I decided to ask a non-developer buddy how he would handle this riddle of creating a program that needs precision greater than its margin of error. Without hesitation he responded "increase the distance"

A knee-jerk reaction of a thought that even I didn't immediately recognize as directed toward myself but he was right... it doesn't work like that, you idiot

The hardware is what it is, the design needed to be changed and with just a few tweaks, the project went from hopelessly useless to production-ready

How to Auto Update WordPress Custom Theme and Plugin from Github

Jack Linhart
Self-taught, lifelong hobbyist programmer
Github copilot is out of beta, would you use it ?
#discuss #programming #productivity #github
Git Commands ( to ease your development 🤗 )
#git #productivity #community #github
What was your win this week?
#discuss #weeklyretro