Hey guys, welcome to the 9th and final part of my series, C++: Explain like I’m five. We have already covered all necessary concepts to get started programming in C++. Therefore, now we will discuss file handling as it is a relatively important and useful skill to have while programming.

In C++, files are interpreted as a sequence of bytes stored on any storage media.
The data of any file is stored in either readable form or in binary code that is called a text file or a binary file. This is achieved through a header file called "fstream". This library manages two aspects that are interface and the transfer of data. It has a predefined set of operations for file handling through certain classes.

The library has predefined a set of operations for all file handling-related actions through some certain classes.

Streams act as an interface between the files and the programs. It indicates the flow of data from a particular device to the program’s variables. The device here refers to files, keyboards, arrays, etc. These streams are treated as objects to support a consistent access interface. Streams represent a sequence of bytes and then deal with the flow of data.

Each stream is associated with a class. Those classes have functions and operations for a certain kind of data flow. 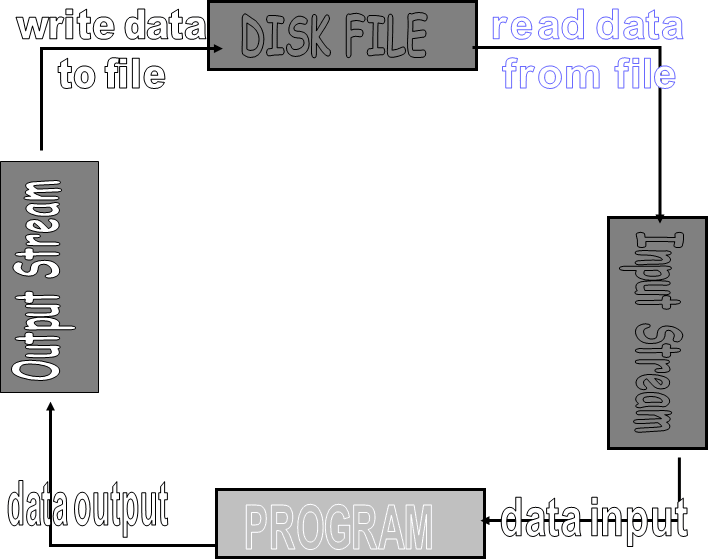 A stream is basically a series of bytes. It acts either as a source from where data can be extracted or as a destination to where the output can be sent. Streams resemble the producer and consumer models a lot.
The producer produces the items that have to be consumed by the consumer.
Here, the producer and the consumers are connected by operators: ">>" or "<<".

C++ has various predefined streams that are opened automatically when the execution of a program starts.

• They are a convenient way to deal with large quantities of data.

• They store data permanently or atleast until the file is deleted.

• With help of files, you can avoid typing data into program multiple times.

Some necessary things to know before using files

• How to ask the program to read the data.

• How to ask the program to write data.

• How to handle and check errors and EOF.

Classes for stream I/O in C++

• ios (input/output stream) is the base class.

• istream and ostream inherit from ios

• ifstream inherits from istream and ios.

• ofstream inherits from ostream and ios.

• iostream inherits from istream and ostream and ios.

In C++, following can be used:

• ofstream: to write data to a file

• ifstream: to read data from a file

• fstream: for both reading and writing

There are various operations you can perform on the file and that are:

• ios::trunc - Deletes all previous content in the file. (empties the file)

• ios::nocreate - If the file does not exist, opening it with the open() function gets impossible.

• ios::noreplace - If the file exists, trying to open it with the open() function, returns an error.

Both the istream and ostream provide some member functions for repositioning the file-position pointer. The members functions for doing so are seekg ("seek get") for istream and seekp ("seek put") for ostream. The file-position pointer is an integer value that specifies the location in the file as a number of bytes from the file's starting location.

This action moves the file pointer to the byte number 20. The bytes in a file are numbered starting from zero. Thus, the pointer will be pointing to the 21st byte in the file.

If you want to set more than one open mode, just use the OR operator "|" in this way:

How to deal with Binary files?

The functions used for binary file handling are:

• get(): read a byte and point to the next byte to read

• put(): write a byte and point to the next location to write

How to write to a file?

Writing to a file and then reading it's data

And that's all folks. You guys are now ready to fly on your own! Go and do some programming in C++ 😆

Note: See the examples of some basic C++ programs here. See how file handling can be used in a project here.

Ayesha Sahar
I write articles about Python, C++, UI/UX & Web Development to make your learning journey easier✨
Const vs Var vs Let: When and where to use them?
#javascript #webdev #tutorial #beginners
A Complete Guide on Technical Writing For Beginners
#writing #tutorial #beginners
Adding Custom Code to your Editor X Website
#tutorial #tooling #webdev #beginners

Once suspended, iayeshasahar will not be able to comment or publish posts until their suspension is removed.

Once unsuspended, iayeshasahar will be able to comment and publish posts again.

Once unpublished, all posts by iayeshasahar will become hidden and only accessible to themselves.

If iayeshasahar is not suspended, they can still re-publish their posts from their dashboard.

Once unpublished, this post will become invisible to the public and only accessible to Ayesha Sahar.

Thanks for keeping DEV Community 👩‍💻👨‍💻 safe. Here is what you can do to flag iayeshasahar:

Unflagging iayeshasahar will restore default visibility to their posts.