If you have not already gone through the process of creating a Cloudant NoSQL DB instance in IBM Cloud, I encourage you to check out the blog below. This way you will have had an opportunity to check out Cloudant in the the cloud: 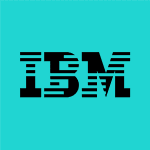 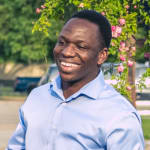 So without further adieu, let's get into it!

So the first thing to be aware of us that Cloudant NoSQL DB is hosted in IBM Cloud. To be more specific it can be called IBM Cloudant and is based on the Open Source Apache Couch DB project. It being hosted in IBM Cloud allows you to get all the security and accessibility that IBM Cloud has by default without any extra configuration or work.

Each document is stored in JSON (Javascript Object Notation) inside of its particular database.

Data can be created, edited and deleted manually using the Cloudant NoSQL DB UI at anytime BUT Cloudant offers an immense amount of capabilities using its Cloudant API. Using the Cloudant API, any developer with the correct access rights can create, modify, delete, view or work with documents and databases using industry standard HTTP Requests.

Though it may not be completely apparent at the moment, one of the greatest strengths of Cloudant NoSQL is it's extremely convenient and powerful API. It allows for rapid integration into diverse project environments and standardized database implementations.

Finally, here is a snapshot of some of the features that Cloudant NoSQL offers out-of-the-box (specificially IBM Cloudant): 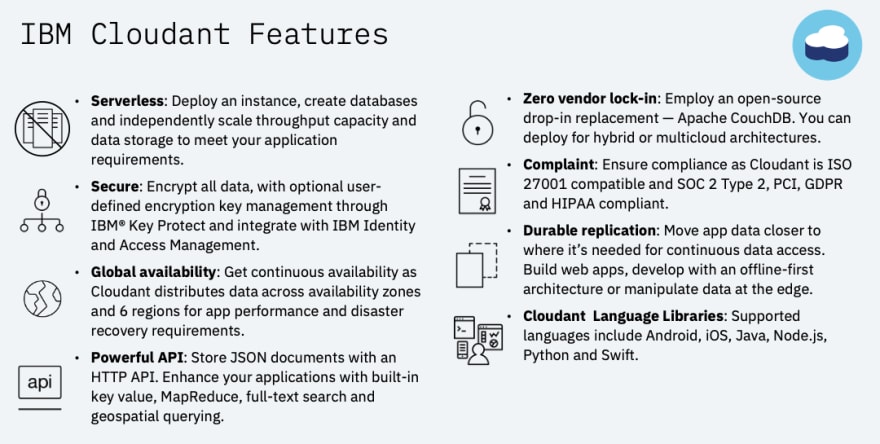 And for those who may be interested in the history of Cloudant, Cloudant was founded my three MIT physicist who worked on large data experiments like the Large Hadron Collider. Its goal was to solve the "big data" problem and was designed for cloud computing and distributing data across multiple servers. With an emphasis on data consistency and data distribution, Cloudant has become a great option for developers looking for more agile and easy-to-use cloud databases.

As you can see, Cloudant NoSQL has a pretty simple, straight-forward and easy to understand architecture as well as a powerful API backing it all. Along with that, it has quite a few features that makes it very useful in this growing cloud development environment and makes it easier for a developer to get going without worrying about things like security and language dependencies.

In my next blog, I'll be focusing on making your first database and how we can quickly and easily connect to it. In that blog, we will also be using the Cloudant API to do a few basic API requests to test the Cloudant NoSQL DB.

And if you are looking to learn more about Cloudant, check out the replays of some of my past webinars where I talk about the nitty-gritty of the basics of Cloudant NoSQL DB and how they relate to React and NodeJS.

Thanks for checking out this blog and until next time!

LOOKING TO LEARN A THING? Check out some of my previous blogs and tutorials:

Dockers and Dad Jokes: How to Containerize a ReactJS Application

Deploying your first ReactJS application into the Cloud

Creating Your Own Chat Room with React, Node, and Socket.io in the Cloud Part 1 Part 2

Once unpublished, this post will become invisible to the public and only accessible to Bradston Henry.