In this article, I'll be explaining what CSS spe-ci-fi-ci-ty is and how it works in very simple terms.

Remember when you were watching that tutorial on CSS and you were told styles are applied from top to bottom, and that the styles that appear below would overwrite the one at the top....well that's not the full story.

Let's look at this example:

If we were to check this in our browser, our button would have a background color of red and a text color of white. That is fine, considering the styles that appear after would overwrite the one before. But what if we had something like this?

You'd expect the button to have a blue background, but in this case, the button would have a background color of red.

The reason for this behavior is, you guessed right.... CSS Specificity

CSS selectors have weights applied to them, and the more the weights, the higher the priority.

Styles
This refers to the inline styling applied to an element. e.g

The specificity for this is (1, 0, 0, 0), and it has the highest weight. To override this, you would need to use the !important flag in your CSS, but that's not really advisable.

ID's have a higher priority compared to classes and tag names.

Tag Names
Selecting a element using it's tag name has the least specificity of (0, 0, 0, 1). Here's an example of tag name selectors.

1 - Assuming we have the following html

2 - Given this html structure

3 - Take a look at this complex selector.

And that's it. With proper understanding of how CSS specificity works, you'll easily able to debug your CSS. Some code editors like VSCode gives you hint about the specificity of the selector. All you need to do is hover on the selector. Here's how it would look in my VSCode: 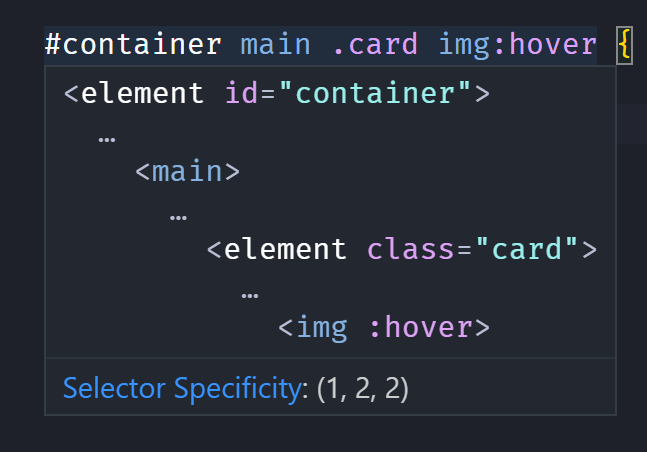 S-FLUX V3, The power of Flux pattern with the ease of redux

How to Install a Specific Version of an NPM Package