An efficient vim-git workflow can boost productivity. In this article, I will discuss different ways to integrate vim with git.

Here are topics I will cover:

Vim and git are two equally great tools for two different things. However, getting them to integrate with each other without plugins can be difficult, but not impossible.

If git is installed in your system, you can use vim's bang (:!) to execute any shell command.

In vim, % means current file. With this, you can do:

Vim has a built-in terminal, :term. You can run your git commands from terminal inside Vim. Personally, I find using a dedicated tmux window/pane for git far more useful than :term.

Although vim does not have a internal git integration, fortunately for us, Tim Pope created vim-fugitive.

Some of fugitive's feature makes some git activities even easier in Vim than doing it from terminal! You can use any plugin managers or use built-in pack to install it.

I will cover some fugitive features below.

When you run :Git without any argument, fugitive displays a summary window similar to :Gstatus.

Compare running :Gstatus with :!git status. The latter will display an ugly "Press ENTER or type command to continue" outside vim window. Fugitive is a clear winner. 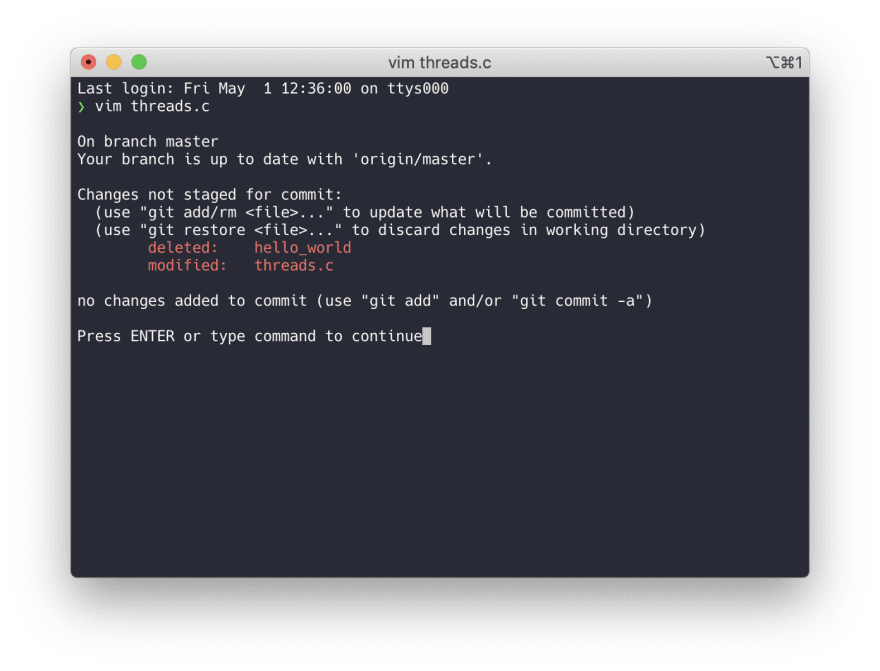 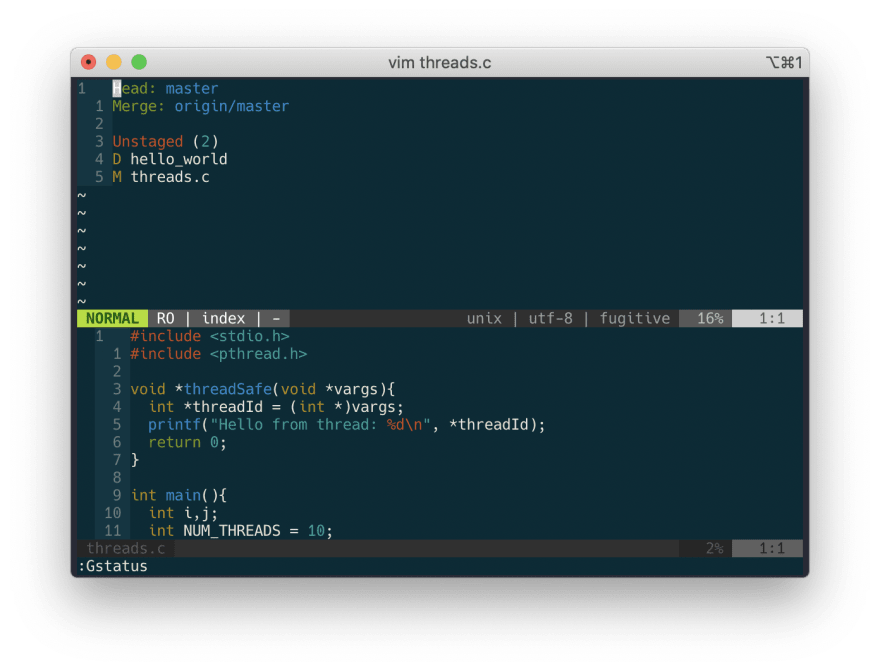 Some things you can do in :Gstatus window:

Fugitive's :Git wraps the git command. You can pass it any option that works with git command:

:Git blame creates a git blame window inside vim. You use this to find the last person responsible for that one buggy the code so you can yell at them (just kidding). 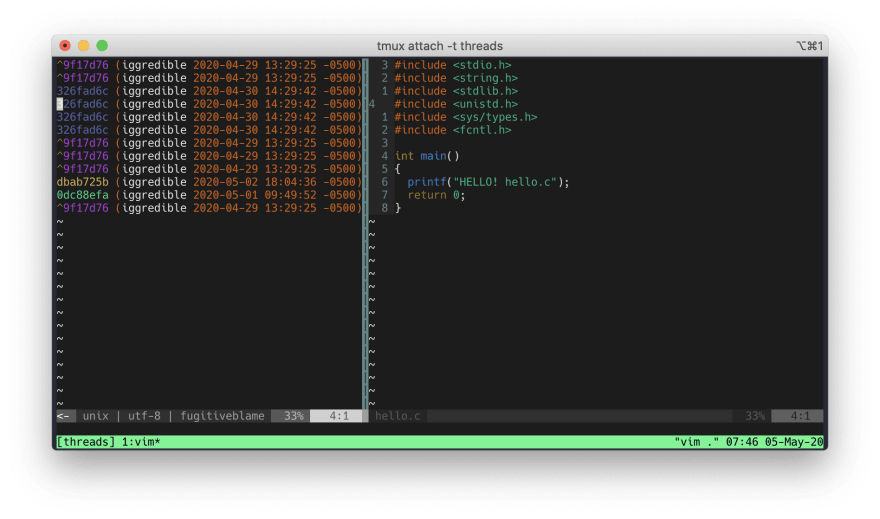 Some shortcuts while you are on blame window:

Fugitive's :Gclog is another useful feature. It launches vim quickfix (:h quickfix) window to display all your commit logs. 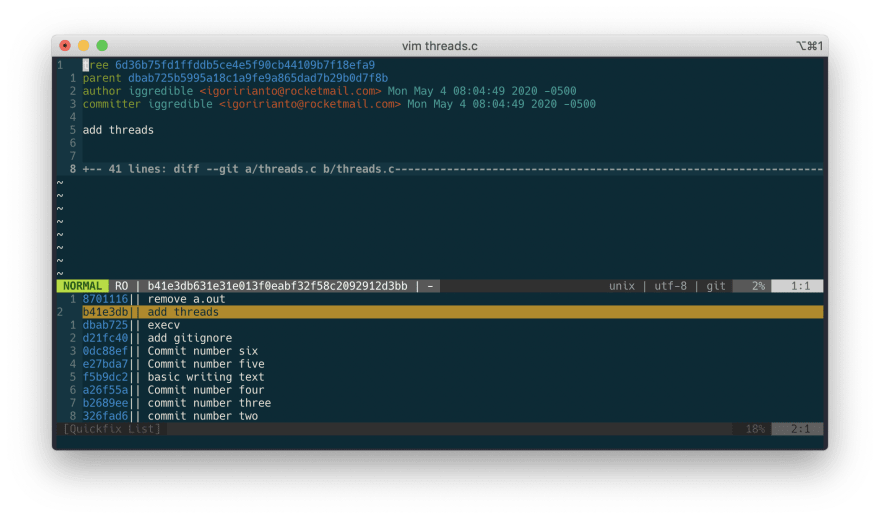 Fugitive shows tree, parent, and changed files in one convenient window. Pressing enter on the tree or parent SHA will take you to that window. You can't do this easily with original git log without workaround with git ls-tree and git show.

Btw, here's a really cool trick with :Gclog. In the bottom of top window you see a SHA. That's the current file name. You can yank that with y + <Ctrl-g>, then paste it with p or P.

Imagine that you are editing hello.c, then decided you want to revert this file back to its state in previous commit. You can run :Gread and all yourchanges will be replaced with previous commit. Vim considers this as a change, so you can undo (u) it if you change your mind.

If you're happy with your changes, run :Gwrite to stage it.

Fugitive performs a vimdiff (:h vimdiff) between a given file and a commit (default last commit) with :Gdiffsplit. 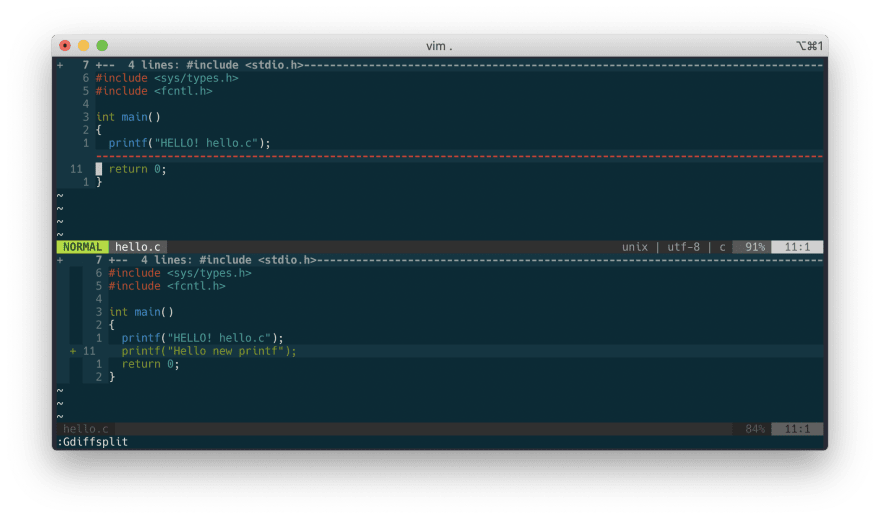 Since it uses Vim's diff window, you can use vimdiff's ]c and [c to jump to next / previous change.

You can view any file from commit SHA or branch with :Gedit.

You can get the SHA from git log or :Gclog.
Keep in mind you can't edit the file because Vim is in Read-Only mode.

Let's do an example with one of the objects to learn how to use it. A fugitive object for the commit referenced by head is @. If I want to :Gedit that, I can run :Gedit @.

I think this is a good place to stop. Vim and git are two wonderful tools for two different things. You can integrate vim and git without plugins with Vim's :term or bang (:!).

For better integration, a plugin is required.

Vim-fugitive is a very popular git wrapper and it is easy to see why. To learn more, vim-fugitive doc is very good.

Also, Drew Neil made a fugitive series almost 10 years ago, but most of contents are still relevant today. I highly recommend it.

Vim-fugitive is not the only git plugin that is available for vim. Below is a list of some git plugins.

Here are some git-related plugins:

Husband 👫. Programmer 💻. Vim 🤓. Web Development should be explained as simple as possible, but no simpler 💡

ssh - a treat for your GitHub

Installing Vim in a Docker Container

Igor Irianto
Husband 👫. Programmer 💻. Vim 🤓. Web Development should be explained as simple as possible, but no simpler 💡
How to search faster in Vim with FZF.vim
#vim #fzf #search #productivity
Why I use Vim
#vim #programming #productivity #unix
Mastering Visual Mode in Vim
#vim #visual #neovim #mode