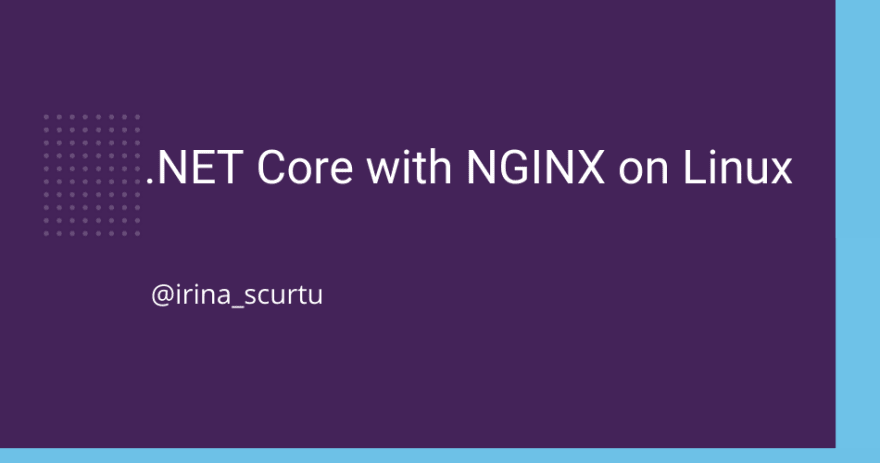 Having .NET Core with NGINX on Linux is easier that you might imagine. In this article I will talk about my experience related to NGINX and what it takes to configure it for the first time. If you come from an IIS/Windows world like me, where you know everything by heart, the declarative approach in NGINX might be a bit odd.

I already have Kestrel, why do I need something else?

Kestrel is the default server implementation for ASP.NET Core, and it is super fast, cross-platform, customizable and it can run on its own. It looks like it is the perfect server, but it was lacking a lot of features related to security. Another thing about Kestrel is that “used as an edge server without a reverse proxy server doesn’t support sharing the same IP and port among multiple processes”.

Although is not required, it is recommend to have a reverse proxy in front of Kestrel because it will give you an extra layer of configuration and defense and integrates smoothly with the existing infrastructure.

NGINX is an open source software for web serving, load balancing, media streaming, that also has reverse proxy capabilities. One of the goals behind NGINX was to create the fastest web server out there. Now, is one of the most popular servers out there.

Depending on your Linux distribution the package manager might differ. I had Red Hat sudo yum install nginx did the trick. After a successful installation you will find the files and folders for NGINX under /etc/nginx path on the server looking pretty much like this( without the highlighted folders)

One of the most important files out there is the nginx.conf file that will contain or reference other configurations for your web apps. Bear in mind that, in order to be able to start NGINX server this configuration will have to be valid.

Configuring NGINX for all your apps

Now, I’ve cleaned up a bit the default nginx.conf and it looks like this:

At line 28, I’ve added an include statement because I want to place all my configurations for different website in separate files, in sites_enabled folder.

In the configuration file I have 2 ‘location’ sections, one for an UI app, and one for the API. The two apps I want to be served from the same ‘domain’ but on a different path:

Once this is done, you can test the nginx configuration by running nginx -t -c /etc/nginx/nginx.confin the terminal. If that is successful, you can go ahead, start NGINX server

We looked at how to configure .NET Core with NGINX on Linux, but the same configs will work on Windows also. The only thing you need to do besides configure NGINX is torun the API as a Linux Service, and to make sure is up.

In a following post we will add https in front of our API, because we need to care about security.

[Solved]Unable to write to wp-config.php file on linux ubuntu

Most Important Things to Learn other than Coding...

How to Create Custom Debian Based ISO