So lets line up all the things that we're going to touch in this post:

Now that we have set the tone, lets go in brief about what the above this are about that what role they play.
We will then actually go over each and code them and implement the deployment in kubernetes.

From the kubernetes documentation Ingress is defined as:

Ingress exposes HTTP and HTTPS routes from outside the cluster to services within the cluster. Traffic routing is controlled by rules defined on the Ingress resource.

Also this diagram seems to provide a bit more details so I'll just leave it here:

All though IMO the above diagram is a bit more simplified. Hence I came up with this arch. diagram explaining the above arrangement in a bit more detail.

Another way to look at Ingress is that its a Layer 7 load balancer. As layer 7 LB is application aware, it can determine where to send the traffic depending on application state.

In contrast, a simple load balancer like Google cloud load balancer or AWS' ELB are Layer 4 LB. You would use it to expose single app or service to the outside world. It would balance the load based
on destination IP address, protocol and port. 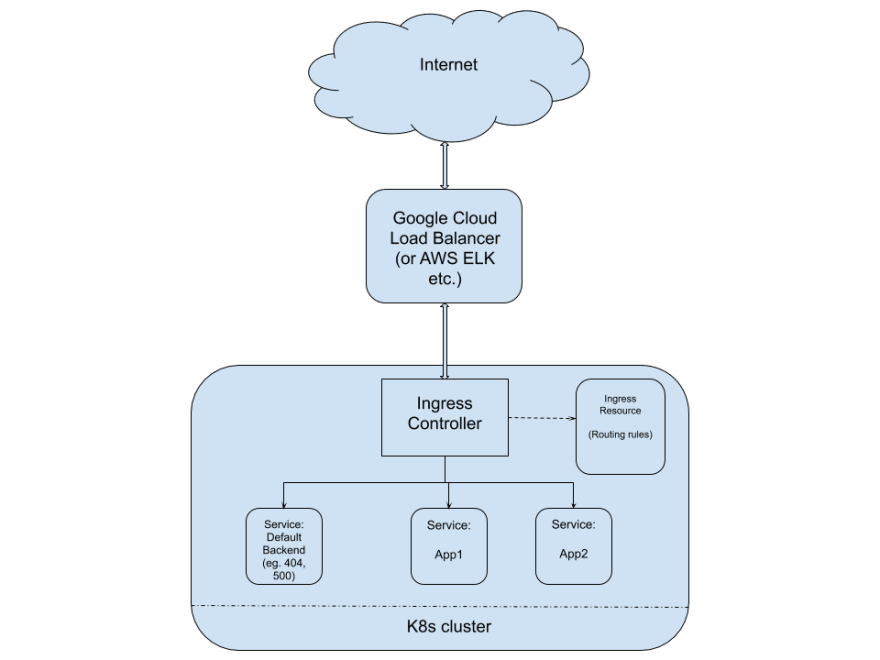 Without going into much detail about what services are, k8s docs describe services as:

An abstract way to expose an application running on a set of Pods as a network service.

In fact ReplicaSets are a direct abstractions on your Pods and Deployments are an abstraction over ReplicaSets.
Again from the docs:

So lets dive right in

Let's first see how our Go code is going to look like:

This is a very trivial api, we add three endpoints. The root url is basically also a health check and hence must return a 200 OK http status.

Once we have this go code built into a container – which BTW is not the subject of this post and I'm skipping it out, we can start concentrating on more about how to deploy
this service on kubernetes.

I'm going to deploy this to a k8s cluster on Google Cloud, but the code should work seamlessly on any other k8s deployments as well.

Also, I've created a container with the above code and made it available on docker hub publicly. The container can be found here – https://hub.docker.com/repository/docker/ishankhare07/ingress-test

You can pull down the image using docker pull ishankhare07/ingress-test:0.0.3

So lets get down to business, I'm assuming you have your cluster running and kubectl command configured to connect to the cluster. We'll be setting up an

While there are many plug-and-play options for ingress available today written over the ingress api, the simplest and most straight forward one is nginx ingress.
I've given the link to official docs which details the exact installation steps for setting it up. But these steps vary slightly depending on the cloud provider, k8s version etc.

Helm is a package manager for k8s. Consider it like apt-get or yum but for kubernetes. Just tell helm the package – which are called charts in helm terminology to be installed, and helm will do it for you. The good this about helm is – its sort of an automation tool over kubernetes. So if you have something that requires multiple steps to setup, helm will do it for you – like run a few deployments, expose it at a port through a service, mount a volume from a persistent disk etc. More on helm some other day. Right now go ahead and install helm on your cluster.

And yes you read that right, "install on cluster". You see helm is a 2 part thing

The way it works is you tell helm what to install using the helm cli. The cli then communicates this to the tiller controllers running on your k8s cluster.
Those controllers fetch and spin the required pods etc. in the cluster for you. In a way we are using kubernetes provided primitives to automate and extend kubernetes itself.

Once you've helm installed and setup, we can now proceed with deploying our application.

We want out go backend to be available on port 8000 because that is what we exposed in our code.
So lets write a greeter.yaml file with the following content

We define a Deployment – with a replicaset of 3 pods. Each pod's port 8000 is open only accessible from inside the cluster. Next we expose a service that funnels all the incoming data to the 3 replicas of our containers in a round robin fashion.

Also we deployed a service, lets check that too:

So our Deployment is up and running and is exposed inside the cluster through a service. Next we need to connect it to the outside world through Ingress.

If all goes well, this should give us the following output:

So we have our ingress controller and the default backend setup and running. Now all that's left is telling this nginx-ingress-controller how and where to redirect incoming traffic.
Let's write a new file ingress.yaml for it:

This will create and ingress and a loadbalancer service and attach a public IP address, which can be seen by:

Now, if we visit the above IP Address we'll hit the default backend for 404 – since / url is not defined in our ingress. 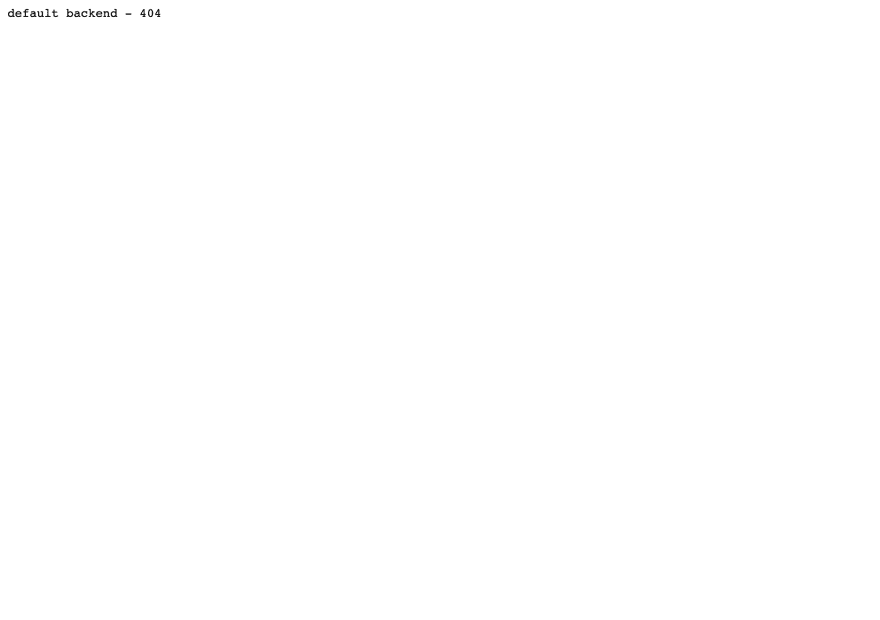 Now on hitting the first path /hello, this is what we get: 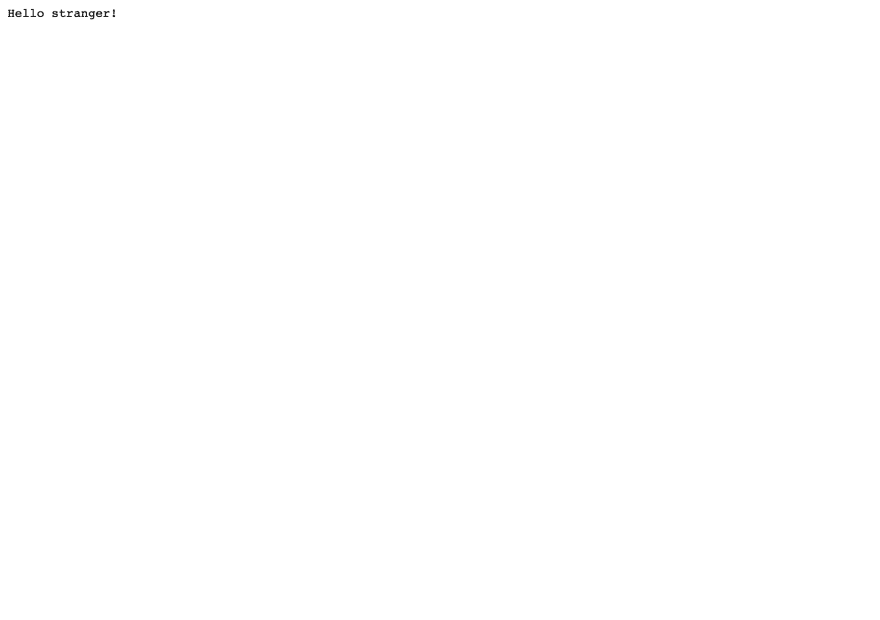 Also we have another internal API endpoint in our greeter service, lets hit that too – /hello/ishan, what we get: 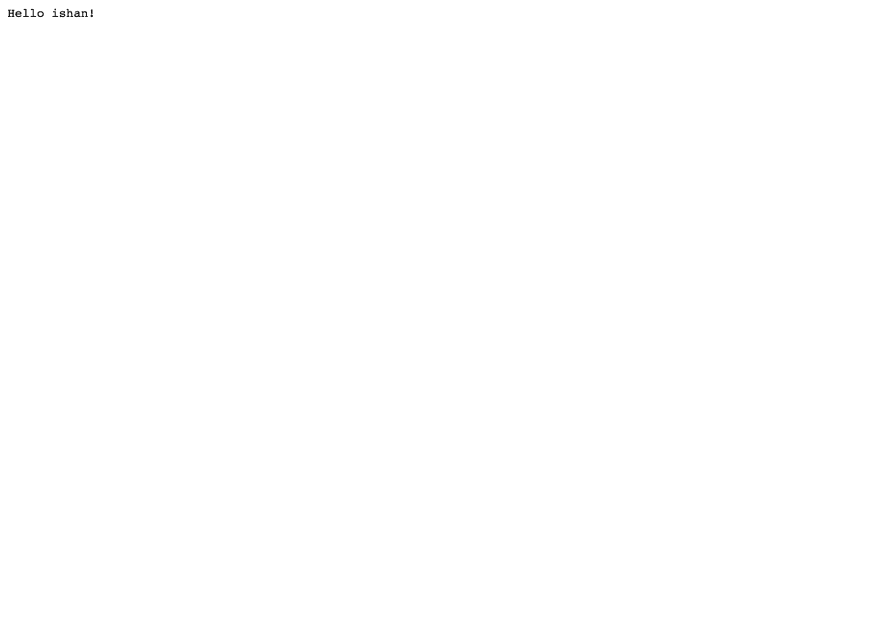 Now that we are able to direct traffic to different deployments using the ingress, let's deploy a new pod and try to redirect some traffic there. We'll simply use hashicorp/http-echo
to use as a second service. Let's write a manifest for this:
apple.yaml

Now that we have this pod running and exposed through the service, we would want to update the ingress file with these changes.

Re-configure the ingress by running:

We can test it by going to the path /apple 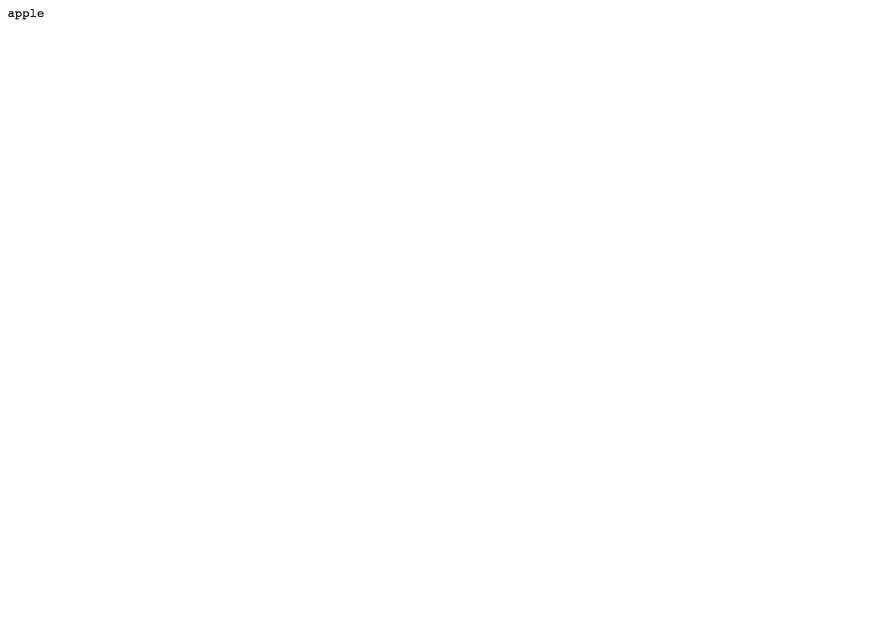 And that's it! I'm sure we can all appreciate the loosely coupled nature of kubernetes and the scalability it provides. In the next blog post we'll look into deploying a gRPC endpoint written in Go deployed on this same k8s cluster behind the ingress. We'll also try to connect it to via a python client.

This post was originally published on my blog at ishankhare.com

Writing "Writing An Interpreter In Go" In TypeScript

Once suspended, ishankhare07 will not be able to comment or publish posts until their suspension is removed.

Once unsuspended, ishankhare07 will be able to comment and publish posts again.

Once unpublished, all posts by ishankhare07 will become hidden and only accessible to themselves.

If ishankhare07 is not suspended, they can still re-publish their posts from their dashboard.

Once unpublished, this post will become invisible to the public and only accessible to Ishan Khare.

Thanks for keeping DEV Community 👩‍💻👨‍💻 safe. Here is what you can do to flag ishankhare07:

Unflagging ishankhare07 will restore default visibility to their posts.