Usually, the internet search result of Blazor WebAssembly is not good.

Fortunately, we can avoid this by doing server-side prerendering.

Aside: I heard in some rumors that the Google search crawler process WebAssembly process such as a Blazor WebAssembly app. But I don't have any information sources, any evidence.

Pre requirement, we have to run the ASP.NET Core process at the server side to implement server-side prerendering even if the hosting model of the Blazor app is WebAssembly.

But if this limitation is no problem, you can implement the server-side prerendering very easily.

What you have to do is just following steps.

Yes, we may have to consider some implementation issue, because the code will run at the server process during server-side prerendering.

But anyway, basic implementation to server-side prerendering is very simple as above.

However, if we can't use the ASP.NET Core server process such as the Blazor WebAssmebly app was deployed to the GitHub Pages, what should I do?

Fortunately, we have one more chance to prerendering.

After the publishing process, we can inject prerendered HTML fragments into the index.html that is published as a post-process of the publishing.

I came up with some ideas to get the prerendered HTML strings of a Blazor component.

One of the ideas is, launch an ASP.NET Core host temporary for prerendering, and send HTTP GET request to get prerendered HTML contents.

I have never tried this method but it will work well I think.

However this method might be complex to implement, and it may require some concerns such as finding a free TCP port for ASP.NET Core host.

Another way, I focused on the <component .../> ASP.NET Core tag helper.

I guessed I can get a prerendered HTML string from the output of the <component .../> ASP.NET Core tag helper, and this way might be more easily rather than the way that launching whole of the ASP.NET Core host.

The list of the classes/interfaces of those dependent objects is here:

The code to setup those objects became around 35 lines.

The coding to set up those dependent objects above was not so hard work.

It was not required using undocumented API, and not required any deep hacks such as using "Reflection" technology.

Finally, I can get the HTML string from that TagHelperOutput object.

By this implementation, I could inject prerendered contents into index.html as a post-process of publishing!

You can see all of the implementations of this article at the source code of my "CUI Flavored Portfolio Site" Blazor WebAssembly app that is deployed at the GitHub Pages hosting.

The source code is on my GitHub repository.

Please notice that the way this article described could not prerender outside of the Blazor component such as <title> and <meta name="ogp:..."...>.

If you have to prerender those elements, yes you can do it, but you may have to more additional implementations, or may have to choose another technic, I think.

Anyway, we could improve the internet search result of the Blazor WebAssembly app hosted on GitHub Pages by using this technic! 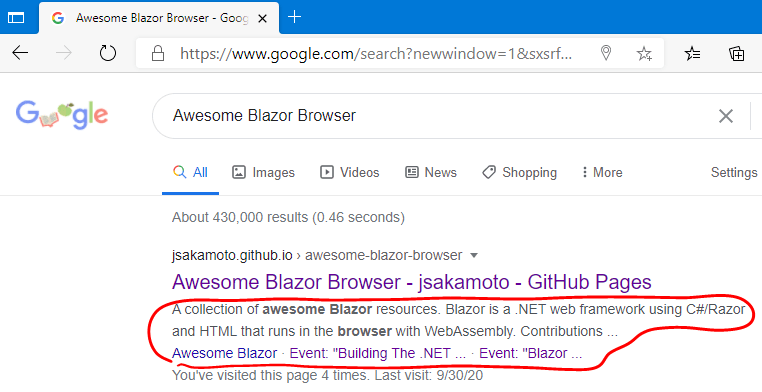 6 Blazor component libraries to speed up your development

A JS coder's view on Blazor