The bundler configuration for a Chrome Extension can be pretty complex. When I started making Chrome Extensions, they were small projects for clients who wanted to automate a task. I was starting a new Chrome Extension almost every week, and it took too much time to configure a new project. Then I thought, "We already have a manifest; why do we need more config files?"

That's the idea behind CRXJS Vite Plugin. My name is Jack Steam, and I've been hard at work over the creating a Vite plugin for Chrome Extensions. So today, I'm excited to invite you to try out CRXJS with Vite.

CRXJS makes it easy to set up a Chrome Extension project with a modern development experience. How easy? Let me show you.

Use your favorite package manager to scaffold a new project and follow the prompts to create a React project.

CRXJS doesn't yet work with Vite 3, but support is coming soon!

Update vite.config.js to match the code below.

Create a file named manifest.json next to vite.config.js.

And run the dev command.

That's it! CRXJS will do the rest. Your project directory should look like this:

Add the extension to Chrome

Let's try it out.

When the build completes, open Chrome or Edge and navigate to chrome://extensions. Make sure to turn on the developer mode switch.

Drag your dist folder into the Extensions Dashboard to install it. Your extension icon will be in the top bar. The icon will be the first letter of the extension's name. 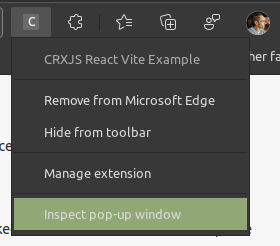 Once you've found the extension icon, right-click it and choose "Inspect popup window". This will open the popup and the popup dev tools window. We need to inspect the popup to keep it open while making changes. 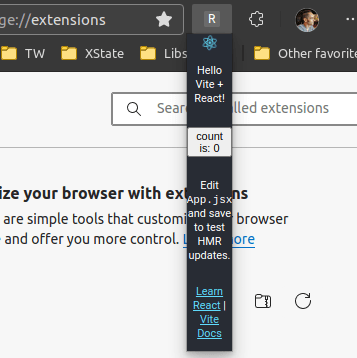 That popup is pretty tiny; let's add some CSS to make it wider.

And boom! HMR magic at work. 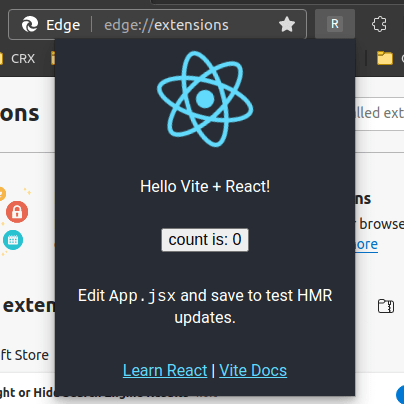 If you enjoyed this how-to guide, check out CRXJS on GitHub and give us a star!

Once suspended, jacksteamdev will not be able to comment or publish posts until their suspension is removed.

Once unsuspended, jacksteamdev will be able to comment and publish posts again.

Once unpublished, all posts by jacksteamdev will become hidden and only accessible to themselves.

If jacksteamdev is not suspended, they can still re-publish their posts from their dashboard.

Once unpublished, this post will become invisible to the public and only accessible to Jack Steam.

Thanks for keeping DEV Community 👩‍💻👨‍💻 safe. Here is what you can do to flag jacksteamdev:

Unflagging jacksteamdev will restore default visibility to their posts.