tmux is an application that I use in my terminal to manage several programs running at once. I've used it on Linux and Mac, it's one of the first things I install on a new computer along with Zsh and asdf.

The tmux wiki refers to tmux as a "terminal multiplexer;" basically, it lets you run several programs in one terminal window (and do some other really cool stuff).

It's one of those productivity tools that takes a certain amount of upfront investment to become comfortable. It's not quite as hard to get used to as Vim, but you do have to remember a handful of hotkeys.

If you want to get your hands dirty with tmux, you'll have to pop open a terminal window and install it.

If you're using Ubuntu, you can install it with a simple sudo apt-get install tmux.

I haven't done development on a Windows machine in years, so I'm not sure how to get it running in that environment. If someone does, please leave a comment so I can link to it here, thanks!

In tmux, pretty much every command starts out with the Leader Key, sometimes also called the prefix. By default, you have to press ctrl + b.

For most tmux commands, you'll press the leader key, then the hotkey for the command. Unlike many hotkeys, you don't need to keep the leader key held down while pressing the hotkey.

tmux sessions are the interface for using tmux. When you start your terminal, you'll need to launch a tmux session.

This is easy, just type tmux into your terminal, and you're off!

Sometimes it is useful to give a tmux session a name, so that you can detach from it, and re-attach to it later.

Detaching from a session

You can detach from a session and return to your standard shell without closing the session. This allows you to pick up your work later.

tmux ls or with tmux list-sessions

Attaching to a session

Once you've detached from a session, you can pick up where you left off by attaching to it.

Attach to the most recent session:

Attach to a session by name:

If you currently attached to a session you can hop between sessions too.

Attach to the previous session:

Attach to the next session:

Kill all other sessions

If you want to kill all the sessions other than the one you are currently using, tmux makes that super simple: 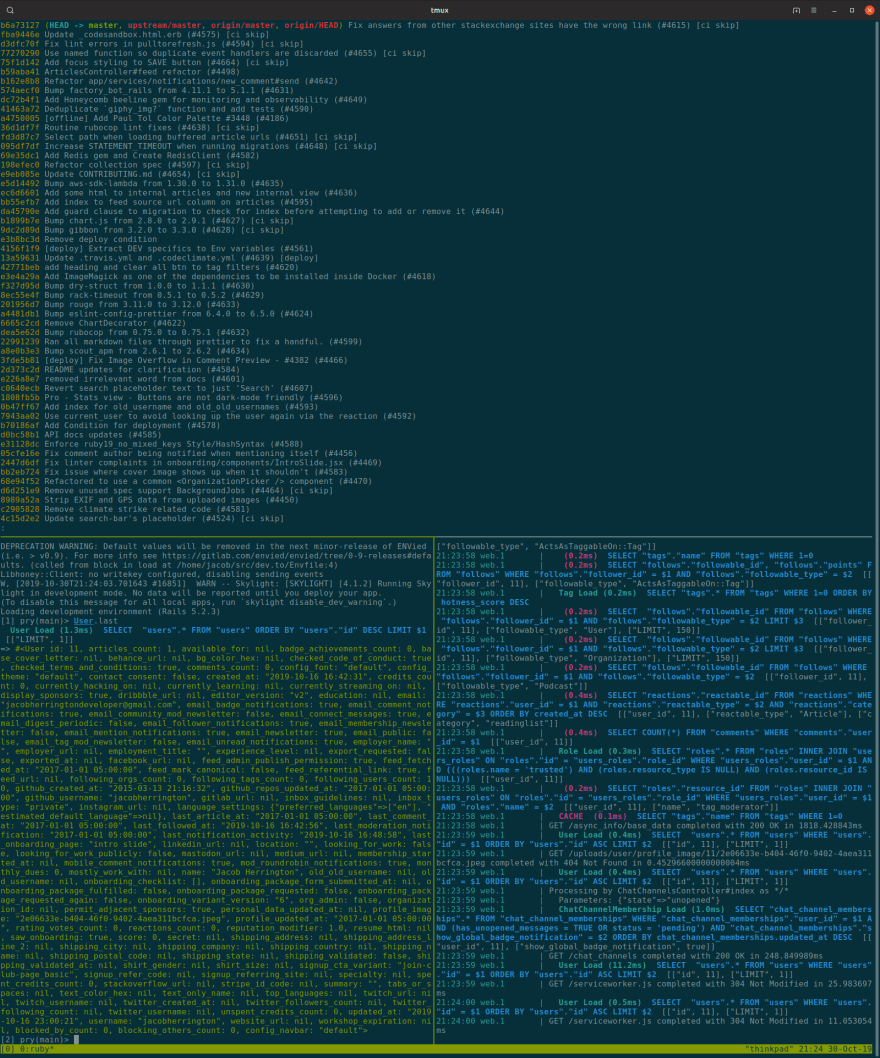 This is the most widely used feature of tmux. When you want a terminal with several windows running different processes, for example: a server, git, and Vim. You'd use a few panes.

The basics of pane splitting are easy!

You can navigate between your panes with the arrow keys. This is the most basic way of moving across your window:

Jump to the most recent pane

Jump to next pane

Panes can be identified by numbers, you can get a list of those numbers with this shortcut:

Swap to a pane by number

This is one of the few cases in which you should hold the leader key down instead of releasing it!

If you need a new set of panes, you can create a window. A window is kind of like a tab.

Convert a pane into a window

Navigate to the previous window

Navigate to the next window

To start command mode, use this:

This is a cheatsheet for me, but hopefully, others find it useful. I'll probably expand it as I think of additional shortcuts I use frequently.

If there is a tmux shortcut you use frequently, feel free to add it in the comments!