This article is the beginning of what I hope to be a "several"-part tutorial on setting up a memorization app. The client application for managing memorization objects (we'll call them "memthings") will be built with React/Typescript. The API for the backend application managing these "memthings" will be built with Node/Typescript. User accounts and authentication will be managed by a separate application with its UI built in Vue and its backend built in Go. All of these applications will be setup to run inside of docker containers and will be "hosted" on the same test domain with routing provided by Traefik. Congrats if you made it through this paragraph. Phew! 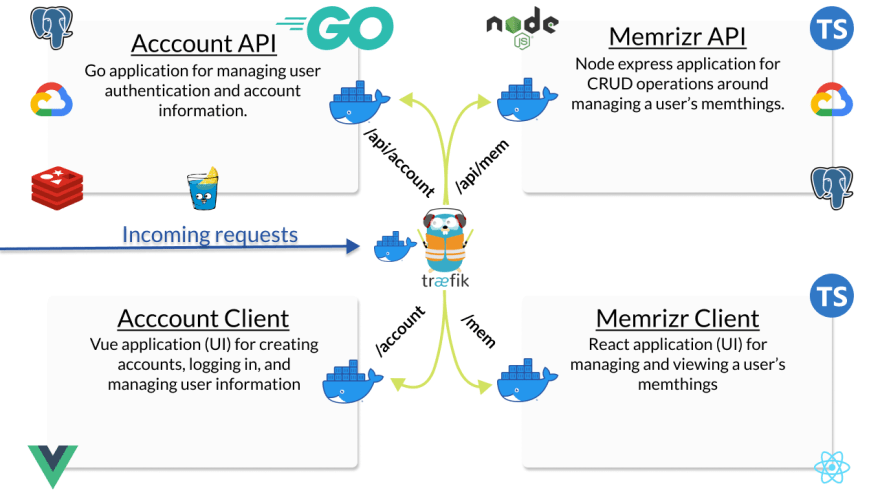 And for those of you that prefer a video version of this tutorial.

If anything is unclear or I have made any errors, please find the functioning code on Github.

For reference, your directory structure will be as follows by the end of this tutorial (minus the readme content). 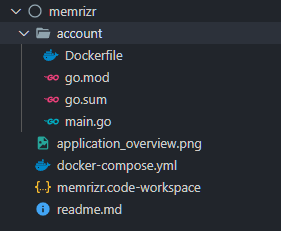 To begin begin scaffolding out the application, we'll need to create a folder which will contain all of our sub-projects along with application-wide configuration files (.env, docker-compose.yml). We do this by creating a root memrizr folder (it's VERRRRRY important to do cutesy re-spellings when creating an app). We also create an account directory where we'll write our Golang application.

Next, we'll create a workspace file in the root folder called memrizr.code-workspace. This file allows us to create a "multi-root" workspace in VS Code. While this step is not required, it is helpful when working with Golang projects which use GO Modules (with a go.mod file to list dependencies). This is because the Go Developer tools (language server) will only function if the go.mod file is at the project's root. There are requests to update this (which would eliminate the problem below), but it would appear to be a difficult task.

We add the following content to the memrizr.code-workspace file. This adds the account folder and the root folder as workspaces. While I would prefer to merely add root application files to the workspace, VS Code doesn't currently support this. And from this Github issue, it doesn't look like they're keen on making this work any time soon. Alas, maybe you're a fortunate soul reading this two years down the line when neither of the above challenges exists!

We'll now move into our account folder, initialize go modules, and add gin, a web framework and http router written in, and for, Golang. When running the commands below, make sure to replace the name of my Github repository with your own when initializing the module.

We'll now create the main go file. In this file we:

You can no test this by running go run main.go inside of the account folder.

Let's create a Dockerfile (as written) inside of our account directory. This Dockerfile will make use of stages. The first stage, builder, is where we download and install all dependencies and then build ths application binary. We'll also use this builder stage in our docker-compose development environment later for auto-reloading our application. We'll do this by means of the application called reflex, which we download in the builder stage.

In the second half of the Dockerfile, we extract the built application from builder, and run it in a separate container. This eliminates all of the unnecessary code from the builder stage and creates a leaner final application container which is ready for deployment.

Now we'll create a docker-compose.yml file. This file can be used to spin-up several docker-containers for development by simply running the command docker-compose up in the same folder as this file (by default, though command-line args can be used to define a filepath, as well). We'll save this file in the root folder of the project.

In this file we create two services.

In order to use the malcorp.test domain for development, we must add it to our hosts file so that when we enter it into our browser, curl, postman, etc., it resolves to our local machine. You can do this by adding the following line to /etc/hosts on Mac/Linux or c:\windows\system32\drivers\etc\hosts (or possibly both if you're using Windows Subsystem for Linux). In either case, you will need to save the file with administrative privileges (sudo on Mac/Linux)

Now you can open your browser and type http://malcorp.test/api/account and you should receive the JSON response

Now try changing the response in main.go. You should see your server restart, refresh the browser, and see your new response.

Wowza! That was a hell of a lot!

Next time we'll add routes to our gin router and cover some details of the account application's architecture.