Last time, we looked at how we can test an HTTP handler for fetching a logged-in user's personal information (the "/me" endpoint). Today we'll add, and test, our first method in the service layer, the Get method of the UserService.

We'll reuse many of the principles from the last post, so I encourage you to reference it as needed! In fact, today's tutorial should be a breeze if you grasped that concepts in the last one.

If at any point you are confusion about file structure or code, go to Github repository and checkout the branch for the previous lesson to be in sync with me!

And for an overview of what the crap we're building, see this.

We previously mocked the UserService when testing the me method of the handler layer. However, to actually create a functioning application, the handler will require a concrete implementation of a UserService. That's what we're doing today! 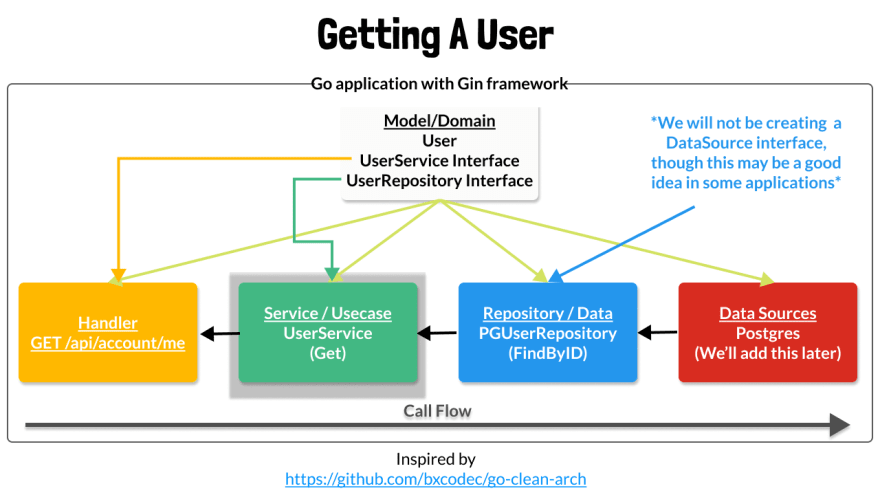 Let's create a struct and factory method for initializing the UserService with its required dependencies.

We do so by adding a ~/service/user_service.go file as shown below. We'll add the test file shown in the service folder later on. 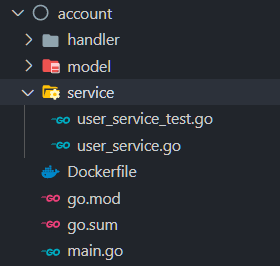 We do the following in the above code.

Take note that our NewUserService function returns a model.UserService, which is an interface. This is because we want the concrete UserService (what we're building now), to have all of the methods defined on the interface. This will allow our UserService implementation to later be injected into the handler layer.

You might currently have a red-squiggly line in your code editor. This is because we have yet to define a Get method on our UserService, but the model.UserService interface defines this as a required method.

To get rid of the above-mentioned error, let's implement a Get method with the required signature. This will actually be pretty dad-gummed simple. We add the following to the currently-opened user_service.go.

That's all for the Get method, folks! We simply reach out to the repository layer to get the User. Our logic is simple because we'll eventually validate the user making a request inside of middleware.

I'm going to flat-out throw down the mock code here inside of the ~/model/mocks/user_repository.go file. If you want a little more insight on how this mock records method calls, check out the previous post or the testify documentation.

We add a single method, FindByID to the mock, as this is currently the only method defined on the model.UserRepository interface. This is the method which is called from our service.UserService.Get method, so the above code will allow us to determine if the FindByID method has been called with a particular set of parameters.

We'll create a single outer test function called TestGet. Inside of this function, we'll add the two test cases inside of t.Run methods.

Inside of the success case, we do the following:

We do the same as above, but this time, we tell the mock to return an error when FindByID is called. We then assert that the first return value of Get is nil (no user returned), and the second return value is an error. Lastly, we assert that FindByID was, indeed, called.

As always, I encourage you to "fail" the tests, and perhaps even add some new tests to make sure this method is functioning and being tested properly.

Thanks again for following along! Next, time, we'll direct our attention to adding a handler for logging in a user with email address and password. The handler and testing will have a lot in common with the handler we've already tested, except this time we'll actually need to validate the incoming email and password included in the request body.

🧪 How to set up Jest & React Native Testing Library in your Expo App! 💥

How to use Google Analytics Data API

Once unpublished, this post will become invisible to the public and only accessible to Jacob Goodwin.

Thanks for keeping DEV Community 👩‍💻👨‍💻 safe. Here is what you can do to flag jacobsngoodwin:

Unflagging jacobsngoodwin will restore default visibility to their posts.