Last time we discussed the application architecture and began building out models, errors, and interfaces inside of the model package. Today we'll create our first handler, me, for accessing information of a currently logged in user. Furthermore, we'll unit test this handler by mocking the UserService which the handler depends on.

If you have any confusion about file structure or code, go to the Github repository and checkout the branch for the previous lesson to be in sync with me!

And if you prefer video, check out the video version below!

Between this lecture and the previous one, I decided to make a couple of minor changes.

What you'll need to do is rename errors.go to apperrors.go, then move this file into a new folder called apperrors inside of model, as shown in the images below.

Finally, make sure to update the package name at the top of the file.

Pass a Context Into Interfaces

After creating the original application for this tutorial, I decided it would be wise to pass a Context from the go context library into our service and repository methods.

For now, all you'll need to do is add ctx context.Context as the first argument to the methods as shown below. With this context passed down the call chain (handler -> service -> repository -> data sources), we can set a single time deadline by which this whole chain must be complete.

It's time to write our first handler, the me handler, highlighted in the image below. 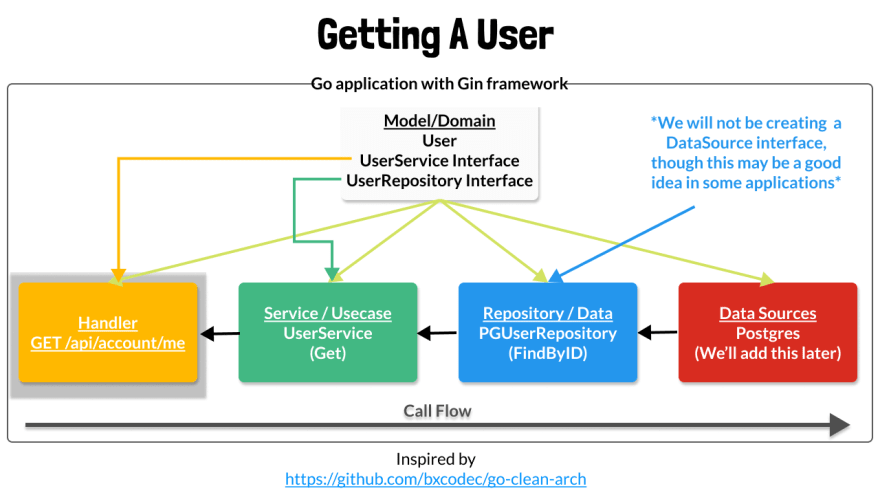 First we'll move the me handler method from handler.go into it's own file called me.go. We'll eventually break all of our handlers into separate files in a similar manner.

Next, we will need our handler package to be able to work with a UserService, so we'll add this interface to our handler struct definition, along with our NewHandler function and config as follows. All our handler methods can now access any methods we define on the UserService interface!

We will update this file to do the following three tasks.

1. Check For a Valid User

First, we make sure that our c *gin.Context has a key called "user" on it. As I previously mentioned, we'll be able to extract this user from inside of a middleware and set the "user" value on the context.

We then check to make sure there is a value on this key. In reality, our middleware will have already returned an Authorization error in this case, but we check for this case as an extra precaution (and what I assume is "good practice").

Finally, we cast the user to *model.User, and get the UID, which is the parameter required by the UserService.Get method.

This one is pretty simple. We don't yet have a concrete implementation of a UserService, so we'll learn how to mock its methods for testing soon!

We check if Get returned an error. If so, we'll log the complete error on our server. However, we'll just send a NotFound error in a JSON response to API consumers.

Mocking the UserService Get Method

Inside of the model folder, let's create a mocks folder with a single user_service.go file inside. 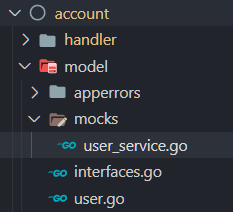 We'll be making use of a pretty dadgummed awesome testing package called testify to create our mocks. So make sure to grab this package with go get github.com/stretchr/testify.

Inside of this file we create the mock as follows.

Note - I will be creating my tests manually for my experience, but there is a nice code generation tool called mockery that can build these mocks for you.

First, make sure to create a me_test.go file inside of the handler package. Inside, we'll create a single test function, TestMe, which sets up gin to run in test mode, and then "runs" 3 separate cases, each defined inside of a t.Run() method.

We'll test for the following cases:

The complete code is included here, and I'll summarize the tests below.

In the success case, we create a mockUserResp for UserService.Get to return. We then create an instance of our recently created MockUserService. We then tell this mockUserService to respond to calls to the Get method having uid with the mockUserResp we just created. We don't require the mock to be concerned with the details of the first parameter, so we tell it to accept any call with a *gin.Context by using the mock.AnythingOfType method.

We then add an httptest ResponseRecorder which allows us to check that the HTTP response we receive is as expected.

We also create a handler with a *gin.Engine and our mockUserService injected into it. Note that we add a middleware to the router for this test, as shown below. This is how we set a User on the *gin.Context to mock an actual user that will eventually be extracted in a middleware.

Next, create an HTTP request and then send the request to our router with the ServeHTTP method. We then assert that we receive an HTTP 200 response with the expected JSON body. Finally, we check that our mockUserService was called inside of the handler with mockUserService.AssertExpectations(t).

This test includes a lot of the same code as the previous test. However, we don't add the User to the context with router.Use(...) as in the Success case.

Therefore, we expect an HTTP 500 status code. We also expect that the mockUserService is not called since the response is sent before it has a chance to be called.

This test is similar to the first two, but in this case we change the behavior or the mockUserService to return an error when the Get method is called.

We then assert that the proper HTTP status code, 404, is returned along with a JSON response containing the error.

Inside of the account project folder, run go test -v ./handler to test the package. If all has gone well, you should see output saying the test with the 3 sub-tests have passed. Make sure to try tweaking the tests (for example, the response codes) to make sure that they FAIL.

Next time, we'll take a bit of a breather and write code for the User Service which will repeat a lot of the principles we covered today.