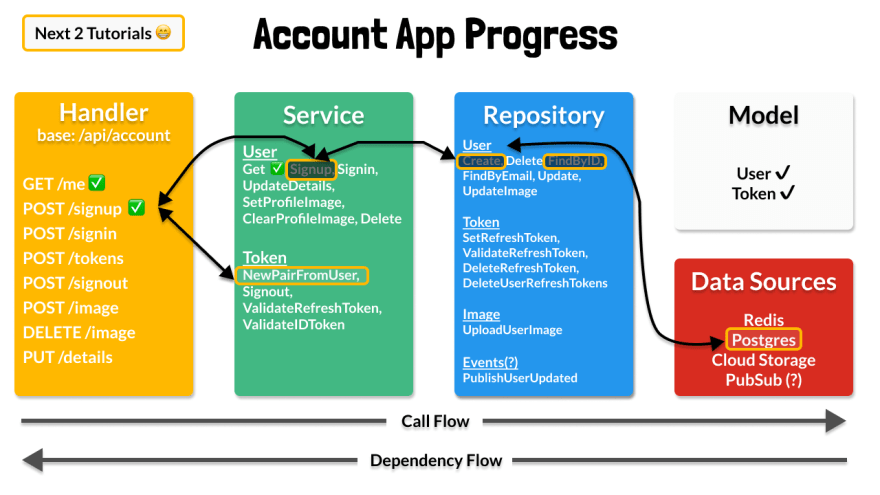 Referencing the diagram, we can see that we have two tasks to perform in order to send POST requests to our endpoint (/api/account/signup):

If at any point you are confused about file structure or code, go to Github repository and check out the branch for the previous lesson to be in sync with me!

Let's go back to the Signup handler in ~/model/interfaces.go to remind ourselves of the call signature of NewPairFromUser.

The second parameter is a User. This user will be created in the Signup handler before we call NewPairFromUser. The final parameter, prevTokenID is for passing the ID of the user's current refresh token so that it can be invalidated before providing a new refresh token. We pass an empty string for this parameter when signing up a user as the user won't yet have a token.

We're not going handle this token ID for a couple of tutorials, as it requires setting up a Redis database and a TokenRepository.

Inside, create a TokenService struct to define this service's dependencies.

Note: I've been making a mistake in creating the struct containers for the various services and repository. The TokenService should be package private, and therefore lowercase. The factory will return a model.TokenService interface. Making the TokenService struct package private will make it so the only way to instantiate the service is through the factory, and not by directly creating a struct. I'll clean this up in two tutorials!

What are the public and private keys, and refresh secret, in the TokenService? We'll be using JSON Web Tokens as our authorization mechanism. Let's do a little primer about what these are so we can then fill in the implementation details for the NewPairFromUser method.

I highly recommend you check out the jwt.io Introduction as that's what I'm using for this explanation.

How They Are Used

For authorizing users to use resources in this application, or other applications/services within our organization. From jwt.io: "Once the user is logged in, each subsequent request will include the JWT, allowing the user to access routes, services, and resources that are permitted with that token."

It's just a 3-part string, xxxxx.yyyyy.zzzzz, where:

The header and payload are written in JSON, and then encoded as Base64URLs. When the JWT is encoded and signed, it looks something like:
eyJhbGciOiJIUzI1NiIsInR5cCI6IkpXVCJ9.eyJzdWIiOiIxMjM0NTY3ODkwIiwibmFtZSI6IkpvaG4gRG9lIiwiaWF0IjoxNTE2MjM5MDIyfQ.SflKxwRJSMeKKF2QT4fwpMeJf36POk6yJV_adQssw5c.

The header tells what signing algorithm was used.

The payload's JSON keys provide information about the user. There are some registered claims which most JWT libraries support by default (like "exp," the expiration time). You can add your own set of claims, some of which are standardized, or registered.

"The signature is used to verify the message wasn't changed along the way, and, in the case of tokens signed with a private key, it can also verify that the sender of the JWT is who it says it is."

As an example, let's say the payload has an isAdmin boolean key that is set to false. If someone were to steal this token and attempt to change isAdmin to true, the token would no longer be valid with the given signature and private signing key.

Note however, that the JWT is easily readable since Base64Urls can easily be read (for example, by copying it into a converter online or in libraries in most programming languages). Therefore, you do not want to include sensitive information in the token (like a National ID or SSN, date of birth, etc).

ID and RefreshTokens in Our App

Remember that we have defined a TokenPair to return upon successful signup. Let's take a look at another diagram of our authorization flow to understand how these are used. 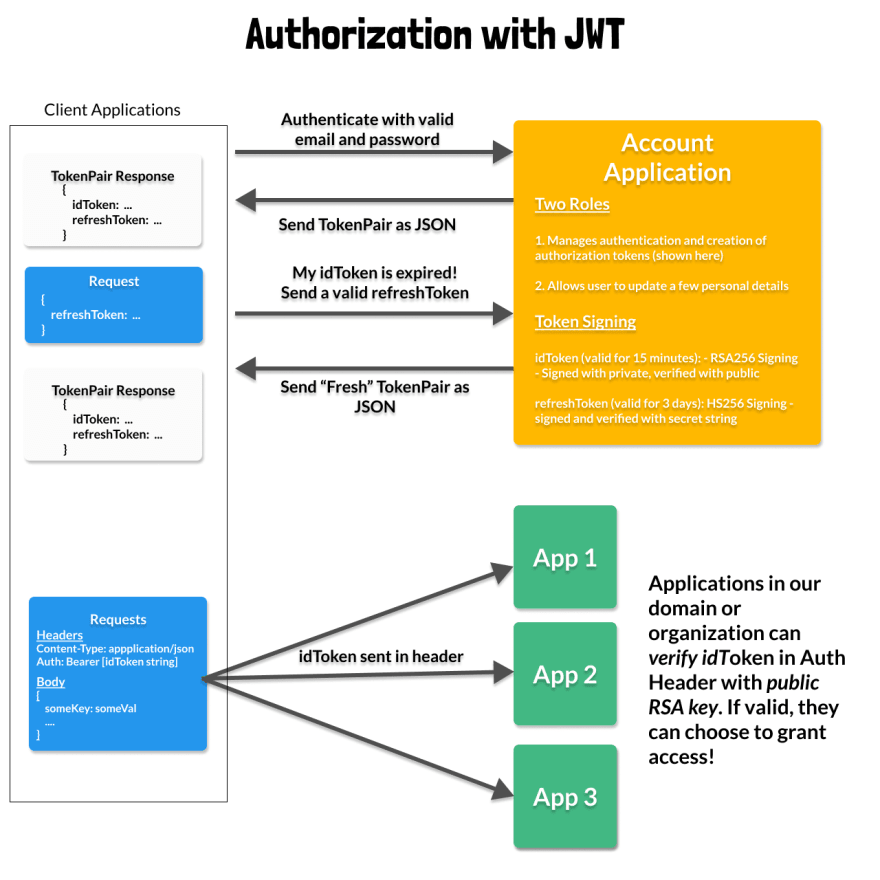 One of the two purposes of this account application is to authorize users to access various services or applications in our domain.

When a user supplies a valid email and password combination (authenticated), the account application provides two tokens. Both of these tokens are JWTs, but they serve different purposes.

The idToken provides the information from the model.User we've been using in our application. Be careful not to return any sensitive user information as I previously mentioned.

The idToken is "short-lived." We'll make this token valid for 15 minutes to limit the time frame over which damage can be done if this token is stolen. You can make this longer or shorter in your application.

The idToken will be signed with an rsa private key, and verified with an rsa public key. We'll create this "key pair" soon. The public key will be provided to the various applications in our organization that need to verify that a user is authorized.

The refreshToken will be valid for a longer time frame. We'll set it to 3 days in our application. The purpose of this token is to improve the user-experience of the application so that they need not continually log in. If the user's idToken is expired, or if a client application loads for the first time, it may send its refreshToken to our Account Application to request a new idToken.

There are some major differences between these 2 tokens.

There is a "friendly" debate about the failings of JWTs as well as how to store them client-side. I previously addressed this at the end of Tutorial 07.

Beyond using JWTs for authorization, you might consider requiring re-authentication for important actions like changing sensitive user details or performing financial transactions. There are also considerations such as using 2-factor authentication, which we won't implement.

We'll create some token utility functions in the same way we did for passwords.

Let's now add code for generating tokens. We'll add some functions for verifying tokens when we add signin and token refreshing features to our API.

Inside we do the following:

Refresh tokens will be generated in a similar manner with a few differences.

Now let's see how we can generate the RSA key pair!

I'm going to use the technique recommended by Google Cloud for generating 2048-bit RSA Key pairs. We'll then add these lines to a Makefile at our project root as follows:

You may need to download Make and OpenSSL to get this to work in Windows. I did it once, and it was a pain in the butt. Sorry I'm too lazy to write a tutorial now 😢. But it is possible, and probably easier than these tutorials!

Create a "Makefile" at project root (one directory above "account").

Make sure to add *.pem to your .gitignore file at the project root to exclude all keys from being committed to your repository!

We can then create keys with make create-keypair ENV=test, where you can replace the value of ENV with the environment for which you want to create the keypair.

With our utility functions completed, we can complete the implementation of NewPairFromUser! We'll generate both of our tokens and check for any errors. If everything works, we return the TokenPair.

Let's create the test file for this service, ~/service/token_service_test.go, and add a single test case to make sure we get a token pair when we call NewPairFromUser!

In the test we do the following:

Next time, we're going to create to run our Postgres database and create a users table with columns corresponding to the fields of our User model. After we successfully migrate create this table, we'll initialize a database connection and perform dependency injection.

With any luck, we'll then be able to fire up our application and sign up an actual user!

After that, I think we'll do a little bit of cleanup and maintenance before moving on to adding more functionality.

To be honest, it you get this part, the rest should begin to move a bit more quickly!