Last time we cleaned up our app by:

As there were a lot of changes, you may want to check our the Github repository's branch called lesson-11, to make sure you have properly updated all of your code!

We're in for another big one today, but hopefully the patterns we established while learning to signup users will become even clearer as we store tokens.

We recently implemented signing up a user (see parts 8-10 of this series). However, we omitted an important detail in our application - storing refresh tokens. You can see these details below in the calls from NewPairFromUser to the token repository. In the diagram, I've grayed out and checked off the completed portions required to sign up a user. 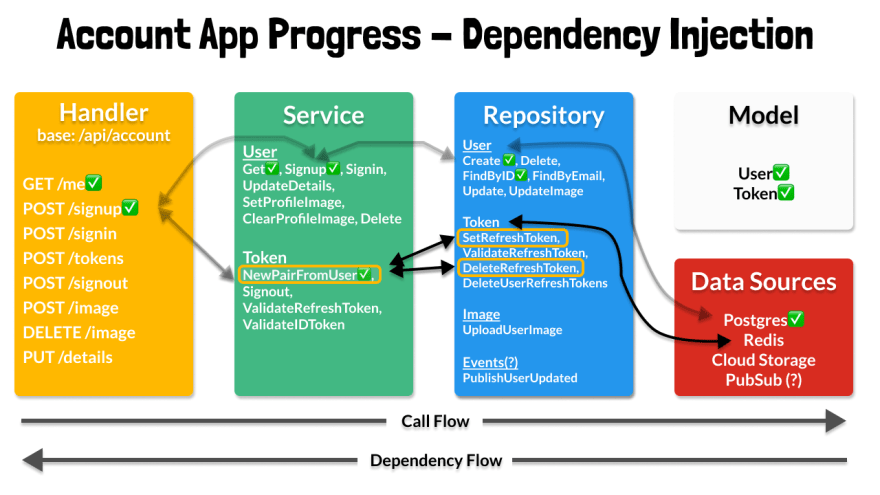 Why store these tokens at all? Because this gives us the ability to invalidate user's long-lived tokens.

Recall that we set the duration to expiration to 3 days for refresh tokens and 15 minutes for ID tokens. This allows a user with an expired idToken to reach out to this account application with their refreshToken to get a new idToken. The idToken will allow the user to access various applications in our domain.

At the end of the day, we do this to make accessing our applications more pleasant, since it would be a pain in the arse to need to login every 15 minutes.

However, there is a danger in creating a token that lives for 3 days. If the token is stolen, or if a user wants to sign out of all of their devices, they could still access the application for up to 3 days!

For this reason, we're going to create a Redis database that stores valid refresh tokens for users. We use Redis because it's in-memory database (fast), has an easy API for storing key-value pairs, and allows us to easily remove the tokens from the cache after 3 days. A diagram of our storage approach is shown below. 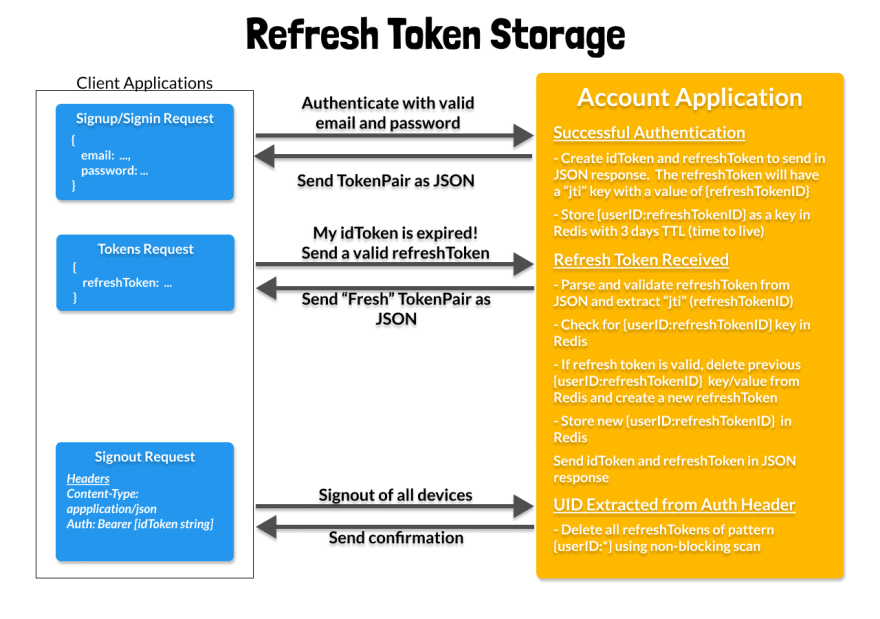 We call this store a white list of refresh tokens. When a user receives an idToken/refreshToken pair, the refresh token will always be stored in Redis. Later on, we'll add a token refresh route and logic to our application. In this case, the user already has a refresh token, which is required to get a new idToken. Nevertheless, we'll expire their old refreshToken in Redis and provide them a fresh one. This is of a type of "revolving" refresh token technique.

I'll admit there are probably more infrastructure-friendly ways to do this, but I think we'll still learn a lot implementing the white list approach, and you can adjust the approach to your needs.

I see that many people create a "black list" of invalidated tokens, instead of a "white list" of valid tokens. In the blacklist approach, if a user wants to reset their password, or log out of all devices, then all of their current refresh tokens would need to be moved to Redis from the main database.

But wait, isn't this the same as a white list? No, because these tokens might originally be stored in the main database, and only sent to the in-memory cache when tokens must be invalidated. This may be a better architectural decision in your case. You'll likely save money using this latter approach, as you would be storing fewer tokens inside of Redis (in-memory is pricier, to the best of my knowledge). You will probably add some complexity, though, by needing to push all of the user's tokens from your main DB to Redis, though that shouldn't be too difficult.

We'll need to perform the following steps to update our application for token storage.

Add the following service at the same indentation level as other services (e.g., postgres-account) in docker-compose.yml, located at the project root.

Also include the volume redisdata under the volumes key at the bottom of the file.

That's all we need to create our Redis container!

Then, update the dataSources struct as follows:

Then, inside of initDs(), establish a the connection as follows, and make sure to return this connection in dataSources.

Notice that we're making use of the REDIS_HOST and REDIS_PORT environment variables. Therefore, we need to add the host (inside of Docker networking, this will be the name of the service) and the default Redis port to our ~/account/env.dev file.

Finally, we want to make sure we close the connection in our close method at the bottom of the file.

You should now be able spin up the application by running docker-compose up inside of the project root folder! Hopefully you'll see a log showing your Redis container is up and running and that the application has established a connection!

We have yet to define expectations for a token repository. We can do so inside ~/model/interfaces.go of the model layer. We'll also add the first two methods for this repository. We'll soon see how these methods are used.

We will access a TokenRepository interface from inside of our tokenService implementation. Currently this service has a single method, NewPairFromUser, which will access the repository methods we just created.

Let's make sure to add model.TokenRepository as a dependency to tokenService in ~/service/token_service.go as follows:

We'll now add the logic for storing and deleting the tokens in NewPairFromUser. We do this after the tokens have been generated. Check out part 9 if you want to learn more about generating tokens.

First, we store the token, which is derived from a userID (as a string), refreshToken.ID and refreshToken.expiresIn. The user is passed to the function from the handler layer, and the refreshToken is generated in a utility function called generateRefreshToken. We return an internal server error should any error occur.

Next, we delete the user's current refresh token if one exists. This functionality is not used when signing up a user. In ~/handler/signup.go, we call NewPairFromUser with an empty string for the final parameter, which is prevTokenID. Note that if there is an error deleting an old refresh token, we do not return an error, but merely log this for internal use.

Here is the call in ~/handler/signup.go.

Even though we're not yet deleting refresh tokens, I wanted to add this logic now so that we can complete our NewPairFromUser method. We'll call this method again when we add token refreshing.

We will now update our ~/service/token_service_test.go to account for the updated logic to NewPairFromUser. As always, we need to mock the behavior or our TokenRepository so that this service doesn't depend on any concrete repository implementation. Let's add a mock, leveraging the testify package as always!

Create a ~/model/mocks/token_repository.go file with the following content for mocking a TokenRepository. These mocks will be fairly straightforward as both methods only return errors. As always, please check out the testify documentation or previous videos to better understand these mocks!

I want to setup the mock before the t.Run blocks. Previously, we set up the mocks inside of each t.Run block.

To do this, import and instantiate a MockTokenRepository, making sure to supply it to the NewTokenService factory.

And just before the t.Run, we add the following:

Since we'll be setting up our mock responses before the t.Run blocks, I want to be explicit about the arguments that we pass to various method calls. That is why you see arguments stored in mock.Arguments structs. This will then make it easier to check that the methods were called with those specific arguments without having to rewrite all of the arguments in test-case assertions.

Finally, let's add a test for the case when no prevTokenID is provided. We'll only test to make sure DeleteRefreshToken is not called. We've already tested for the response body in the first test.

You should now retest this method by running the following from the account directory:

We start by creating a ~/account/repository/redis_token_repository.go file.

As with other repositories and services, we start by defining a dependency struct and a factory function to initialize this struct.

Make sure that you import redis/v8 as auto-import may not import the correct version.

Next, we'll implement our current two methods on the model.TokenRepository.

I've added some comments about the storage of these tokens, but let's make sure it's clear what we're doing!

We store the tokens with a key {userID}:{tokenID}. We append the token to the userID (as opposed to storing the tokenID alone) because this will allow us to use a Redis operation called scan if we need to invalidate all of a user's refresh tokens. This would be necessary if the user wanted to reset a password or sign out of all devices. We'll be able to scan for and delete all keys starting with the user's id. Scan does this in a non-blocking fashion so other operations can be performed on the database.

The DeleteRefreshToken is used to revolve refresh tokens. If a user wants a new idToken, we'll also give them a new refreshToken and invalidate their former token. But I think I'm repeating myself. 😉

Let's take our Redis data source, create a TokenRepository from its RedisClient field, and inject this into our TokenService implementation. The TokenService has already been injected into the handler. We make these updates in ~/injection.go of package main.

Use Redis Client to View Cache

Let's re-run the application, sign up a new user, and then check to make sure that user has been created with a token. Note that I've deleted all users from Postgres before running these commands.

You should get a response with the idToken and refreshToken stored as JWTs:

You can then copy and paste the refreshToken inside of the jwt.io debugger or in another way that you prefer.

I get the following body for the token:

There are various options to look at a Redis DB, including a GUI version.

For this tutorial, I'll show how to use the CLI version.

You can check for the existence of the key as follows (we're using the default Redis port, so you need not do anything special to connect from your local machine):

And you should receive a response of "0", the value we stored under the key (because I believe you have to store a value for each key).

You can also check the expiration on the key with the TTL (time to live) command.

It looks like our time is just shy of 3 days, in seconds!

That was another big one! Thanks for hanging around! We're starting to reap the benefits of our application's architecture. Sure, it was a pain in the arse to set it up, but now I'm quite enjoying connecting everything!

Next time, we'll add middleware to set a handler timeout for each individual request. The tutorial won't involve modifying so many files, but it will be interesting in terms of working with Go and address some concurrency principles!