To make these features work we will

Add the interface Stats to types. Stats describes the stats for a single question.

We will use the question from Cards as the key to store and retrieve the stats.

StatsState is a union type. A union type is a way to tell TypeScript that a value is going to be one of the types in the union type.

The enum StatsActionType and the type StatsAction define the types of actions that we can dispatch to StatsContext. Later in this post you will write a case for each type of StatsAction so the reducer in StatsContext can handle it. In addition to the type, each action takes a parameter called 'question.' The 'question' is a string, same as the question from the Card objects. When the reducer receives an action, it will use the question as the key to find and store the stats.

Our tests for StatsContext will follow the same format as the tests we wrote for CardContext. We will test the Provider, the Context, and the reducer. We will start by testing the reducer to make sure that it handles actions correctly and returns the state that we expect. We'll test that the Provider renders without crashing. Then we will write a helper component to make sure that the Context returns the right data.

Choosing What to Test

We'll start testing with the reducer.

Write a comment for each test we are going to make.

Imports and the first test. Declare state, an empty object. Declare action as an object with an undefined type. 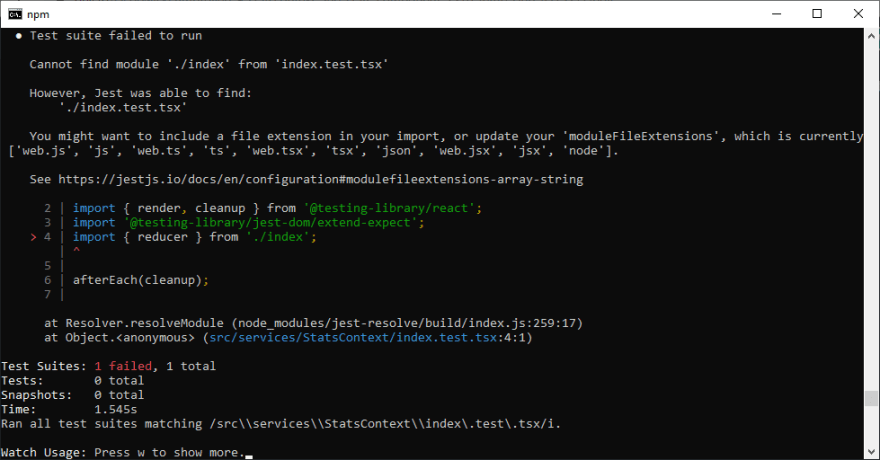 Write the first version of the reducer. Remember that the reducer takes two parameters.

Before we write the tests, we need to add the blankStats and initialState objects to the StatsContext file.

Create the initialState. Put it after the reducer.

Ok, now we are ready to write the second test.

Test 2: reducer Adds a New Stats Object When it Receives a New Question

The next test we are going to write is 'adds a new stats object when it receives a new question.' That's a good thing to test. But shouldn't we test each case to make sure it works? Will we have to write three tests?

And what about all the tests after that?

First we'll write a single test to show that the right case in the reducer adds a new stats object to the state. Then we'll write the code to pass that test. After that, I'll show you how to use it.each to make many tests at once when you want to test a lot of things with similar code. We'll replace the individual test with code that generates three tests, one to test each case.

That looks pretty similar to the tests we've written before. 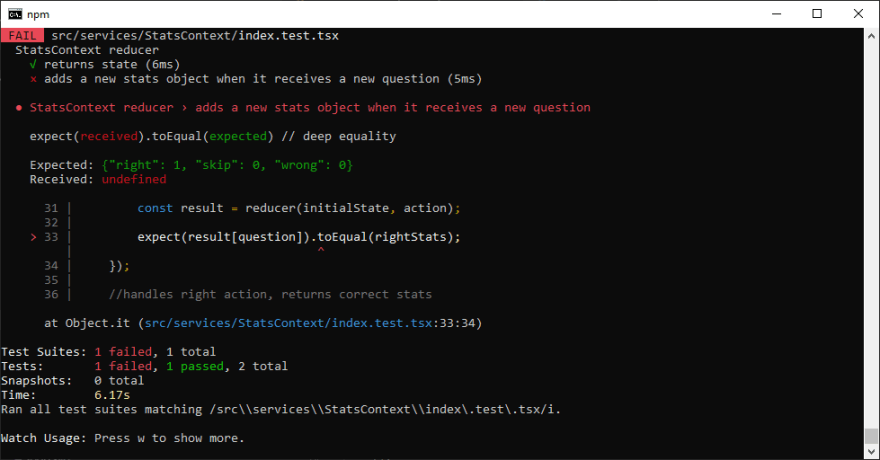 Run it, and it will fail.

Now let's write the code for the reducer to handle actions with the type 'right.'
The case will need to:

Case right, wrong and skip Will All Be Basically the Same Code

If you understand how the code for case right works, think about how you would write the code for the other cases, wrong and skip. It's pretty much the same, isn't it? You'll just be targeting different properties. wrong instead of right, etc.

The tests will look very repetitive. In fact, the tests would be the same. To test wrong, you would copy the test for right and just replace the word 'right' with the word 'wrong.' Writing all these tests out would be a waste of time when we will have three cases that all work the same. Imagine if you had even more cases that all worked the same! Or if you wanted to test them with more than one question prompt. You would be doing a lot of copying and pasting.

Jest includes a way to generate and run multiple tests. The it.each() method.
Delete the test we just wrote for 'adds a new stats object when it receives a new question.' We don't need it anymore. We are going to replace it with code that generates and runs multiple tests.

The API, which means the arguments that it.each() accepts and the way you use them, are different from what you would expect. One thing to note is that the code that you write to generate the title for each test uses a weird format called printf formatting. That's why you'll see % signs in the titles when we write them.

To make it.each work we will

Start by making a describe block.

Inside the describe block 'Test each case'

Write the functions that we'll use to generate the arguments for it.each().

Make a helper function that takes a StatsActionType and returns a Stats object with the argument type set to 1.

Bracket Notation doesn't mean there's an array. Bracket notation is a way of accessing an object property using the value of the variable inside the brackets. So when you call getStats('right') you will get back an object made by spreading blankStats and setting right to 1.

The getStats returns an object. It has a Concise Body and an Implicit Return. Surrounding the return value in parentheses is a way of telling the compiler that you are returning an object. The curly brackets enclose the object that is getting returned. Without the parentheses around them, the compiler would read the curly brackets as the body of the function instead of a returned value.

Make a helper function that accepts a StatsActionType and returns a StatAction object.

Write the code to generate the arguments that we will pass to it.each.
Object.values will give us an array of each value in StatsActionType: ['right', 'skip', 'wrong'].

Array.map will iterate through each value in that array and return a new array.
In the callback function we pass to map we'll create an action object, the results that we expect to see, and return the array of arguments for the test.

Use it.each to run all the tests. Each test will get an array of five arguments. If we wanted to rename the arguments, we could, but to try and make it easier to read we will name the arguments the same thing that we named them when we created them.

I'm not going to explain printf syntax, but here's a link if you're curious. 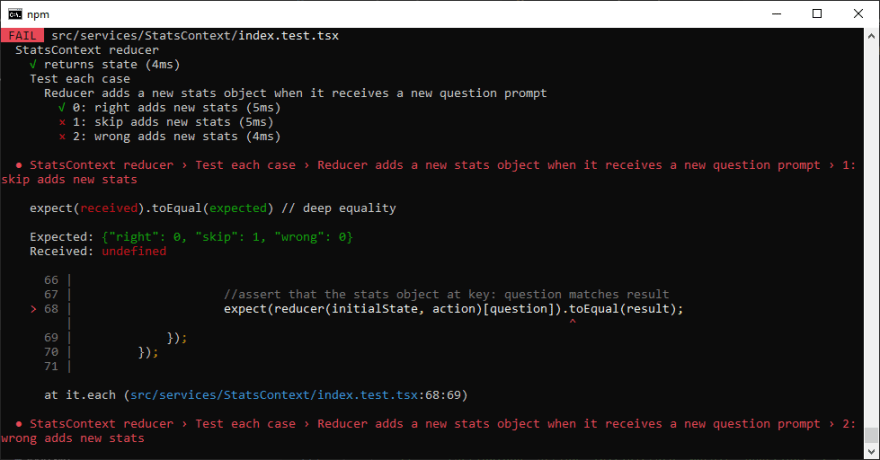 Pass the it.each Tests for skip and wrong

Write the case for skip and add it to the switch statement. Notice that we use bracket notation and the ternary operator to get the value for prevStats. 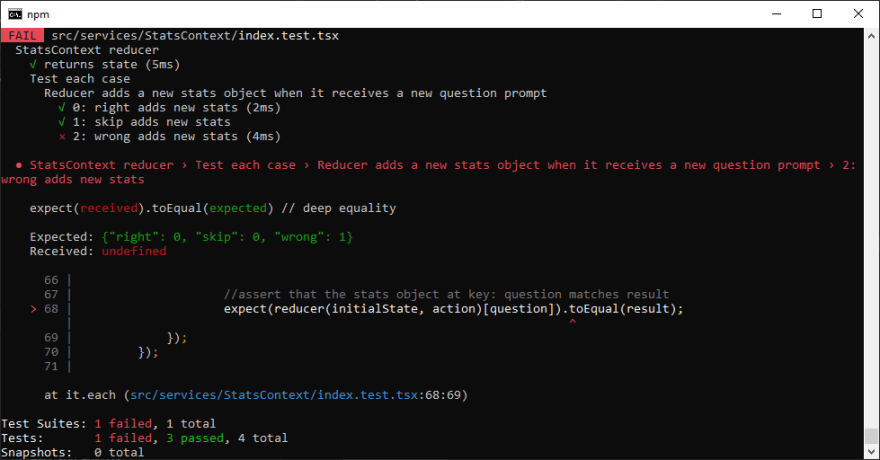 How Would You Write the Code for Case wrong?

Try writing the case to handle wrong actions on your own before you look at the example below. Hint: Look at the cases right and skip.

Rewrite the helper function getStats() to take an optional parameter stats, a Stats object. The '?' tells TypeScript that the parameter is optional. If getStats receives stats, create the new Stats object by spreading the argument received for stats. Otherwise, spread the imported blankStats object.

Use Object.values and Array.map to create the test arguments.

Use it.each to run the array of arrays of test arguments. 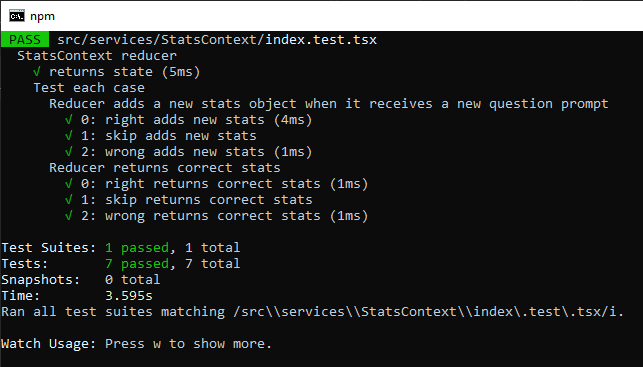 Tests That Pass When You Write Them

These tests all pass because we already wrote the code to pass them. If a test passes when you write it, you should always be at least a little suspicious that the test isn't telling you anything useful. Can you make the tests fail by changing the tested code? Try going into the index file and changing the code for one of the cases in the reducer's switch statement so it doesn't work. Does the test fail? If it still passes, then that's bad!

Make a describe block named 'StatsProvider.'
Write the test to show that the StatsProvider renders without crashing. Recall from testing CardContext that the React Context Provider component requires a prop children that is an array of components. That's why we render StatsProvider with an array of children. If you prefer, you can use JSX to put a child component in StatsProvider instead of passing the array.

This test will fail because we haven't written the StatsProvider yet. 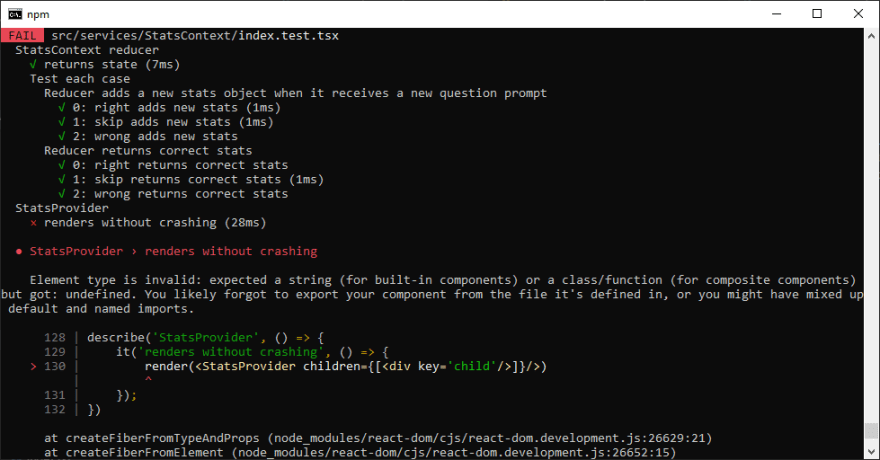 Declare the props for the StatsProvider. StatsProvider can accept ReactNode as its children. We can also declare the optional prop testState, which is a StatsState. When we want to override the default initialState for testing purposes we just need to pass a testState prop to StatsProvider.

Write the StatsProvider and the exports. If you want to review the parts of the Provider, take a look at the CardProvider in post 6, where we made CardContext.

We use Array Destructuring to get the state object and the dispatch function from useReducer. We return the Provider with a value prop created by spreading the state and the reducer. This is the actual reducer function, not the placeholder that we created earlier. Child components are rendered inside the Provider. All child components of the Provider will be able to use useContext to access the StatsContext.

To test if the StatsProvider is providing the correct values for StatsContext, we are going to write a helper component. Let's list the features we are trying to test:

Create exampleQuestion and testState. You can copy and paste the existingState from inside the 'reducer' describe block above. 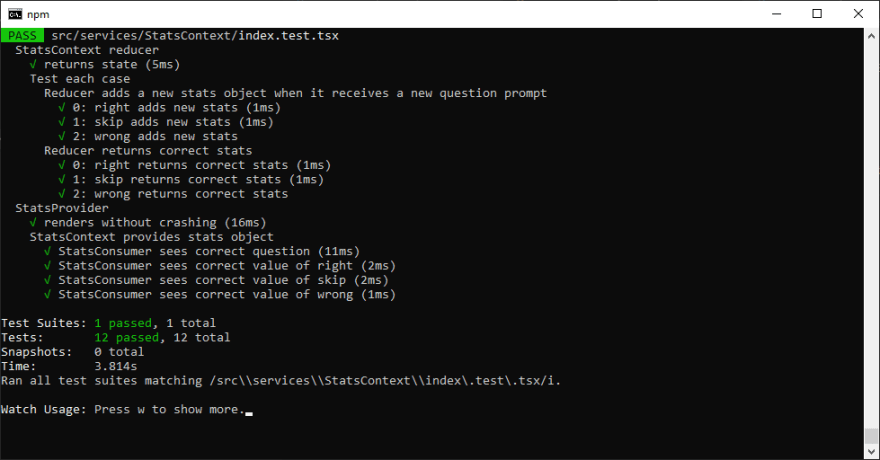 it.each() can take an array of arrays. it.each can also accept a tagged literal. A tagged literal, or template literal, sounds way more complicated than it is. A tagged literal is information inside of backticks. They are pretty common in modern javascript, and very useful.

To use a tagged literal for your it.each tests, you basically write out a table and let it.each run through the table. You declare the names of your arguments in the top row, and separate everything with the pipe | character.

Delete the three tests that we wrote for the value of right, skip, and wrong. Replace them with this example of it.each using a tagged literal.

This example also calls it by its alternate name, test. Remember, the 'it' method is an alias for the 'test' method. So calling test.each is the same as calling it.each. I think "test each" sounds better than "it each," so I usually use test.each when I'm running multiple tests.

See how in the top row we named our arguments? The first column is named 'type' and the second column is named 'expected.' Also notice that when we are printing the title we can refer to them by name instead of using the printf format. Like I said earlier, the test.each API is different from how you'd expect it to be.

We use object destructuring to get type and expected out of the arguments passed to each test. Then writing the tests goes as normal. 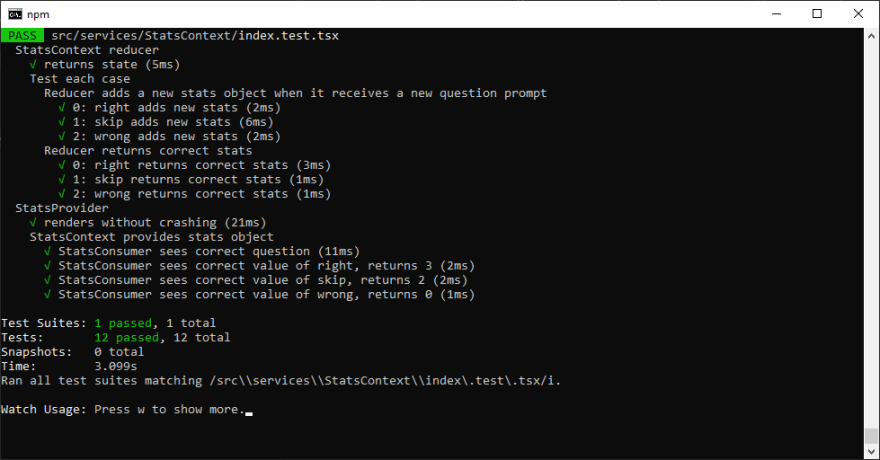 Import StatsProvider into the App

Go to /src/App.tsx. Change it to this:

Can you write a single function getPrevStats that each case can call to get the previous stats for a question? Hint: You can pass the state to a function just like any other object. You'll know if your function works or doesn't because the tests will tell you if you break anything.

Can you write a single function getNextStats that each case can call that will return the next stats value?

If you write these functions and replace all the code inside the cases with them, you're eliminating duplicate code without changing the way the code works. That is called refactoring, and it's a big part of Test Driven Development.

In the next post we will make the Stats Component that will show the stats to the user.

Back To Basic: Mental Model to Understand Flexbox