I started working on a Python project about a year ago. It was very annoying at first, as I was trying to embrace the Python style and figure out my workflow and the tooling. It took me some time until I finally set the things appropriately.

In this article, I'd like to share how I made a productive Vim-based environment for working with Python. 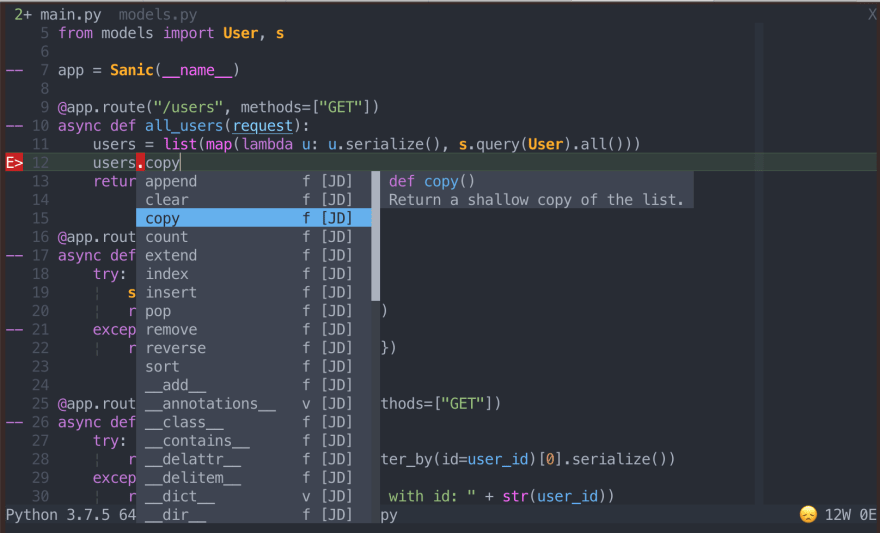 Disclaimer: For some you, my setup may seem like a bit too much. You don't have to install every plugin listed in this article or copy every configuration line. Pick up what you like.

Let's start with a list of some general-purpose plugins which I find irreplaceable for any language.

The other plugins I use include

The colorscheme used on the screenshots is joshdick/onedark.vim, which is inspired by the Atom theme.

Vim comes with syntax highlighting for many popular languages, including Python, though it is not always the best one.

There are several options to improve the default highlighting.

My favorite color schemes (which I switch quite often) include junegunn/seoul256.vim and joshdick/onedark.vim (the one on the screenshots).

You can set up indentation rules manually like this.

A better alternative is Vimjas/vim-python-pep8-indent plugin. It does a much better job complying with the PEP8 style guide.

Folding (:help foldmethod) is when you collapse junks of code so that they don't distract you from the part that you are looking at right now.

The best approximation is to use the folding method indent though it doesn't work perfectly all the time.

To toggle a fold you can press za (:help fold-commands), and I have it mapped to Space for convenience.

The fantastical dense-analysis/ale plugin can be used for linting (which essentially means checking for syntax errors) and auto-fixing extremely well. It's asynchronous, meaning that it won't block the UI while running an external linter, and it supports a great range of languages and tools. 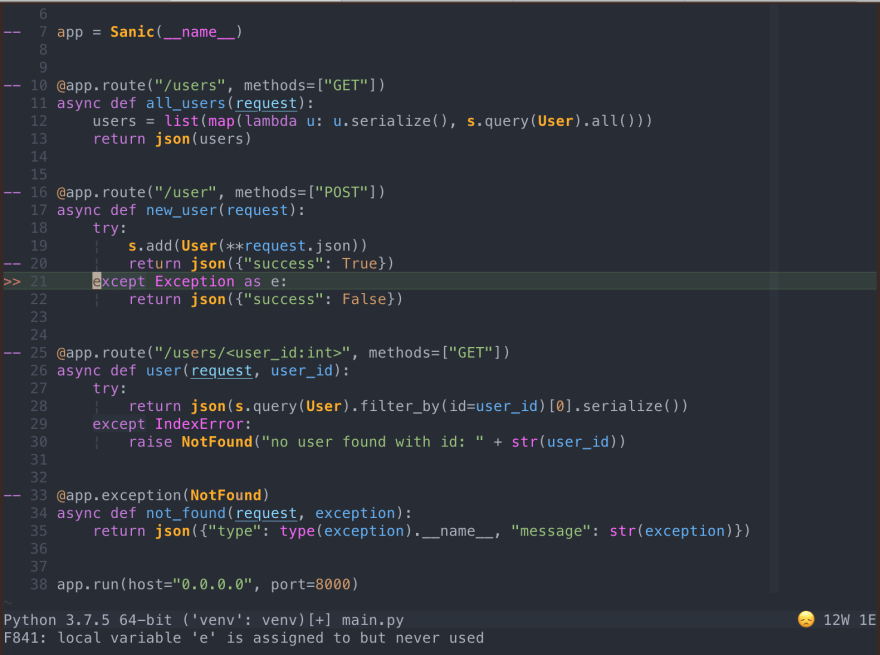 ALE highlights problems with your code in the gutter. When you move the cursor to the problematic line, it shows the full error message at the bottom of the screen.

By default, ALE will use all possible linters it could find on your machine. Run :ALEInfo to see which linters are available and which are enabled.

It is better though to explicitly specify which ones you're going to use with a particular filetype:

Some of the linters are also capable of fixing the problems in your code. ALE has a special command :ALEFix that fixes the whole file. So far, I'm only Google's YAPF as a fixer that formats the whole file when I press F10 or save the current buffer.

The last option is a huge time saver — it will automatically fix (and thus format) your file on save.

I also have a little piece of configuration that shows the total number of warnings and errors in the status line. Very convenient.

And here are a couple of alternatives to ALE:

Jedi is a "language server", which simply means that it's a separate process that runs in background and analyses your code. Other clients (editors or IDEs) can connect to it and request some information, like completion options, or "go to definition" coordinates.

In order to use it, you need to install it with pip install jedi, and then also add a client.

One option is davidhalter/jedi, which does a very decent job.

Here's what it can do:

Recently I have switched to neoclide/coc.nvim and coc-python. Coc is an "an intellisense engine" for Vim and Neovim and does a really good job when it comes to completion and communicating with language servers.

To me, the selling point is the usage of the new floating window API of Neovim, which makes it very convenient.

Coc-python can use both Jedi and the Microsoft's Python Language Server. The first time you run it, it will ask you to install the components it needs (like a linter).

And of course the auto-complete menu (which you can see on the very first screenshot) appears as you type.

Basically, it's a very solid and comprehensive plugin which covers almost all of our needs.

Read to the wiki for more information about its capabilities.

The drawbacks of using Coc include:

Still, it does the job well, and I continue using it (until there's a better option).

Where to go next?

Here are some other articles I learned from a lot:

And some more articles in the similar vein from this website:

P.S.: I'm writing a book about the modern Vim setup for IDE-like experience. You can check it out here.

Give feedback for my portfolio

Once suspended, janis_t will not be able to comment or publish posts until their suspension is removed.

Once unsuspended, janis_t will be able to comment and publish posts again.

Once unpublished, all posts by janis_t will become hidden and only accessible to themselves.

If janis_t is not suspended, they can still re-publish their posts from their dashboard.