In my last post about Domain-Driven Design (DDD) I explained why DDD is (still) relevant and what it actually is. I explained the basic terms like Domain, Model, Ubiquitous Language, and Bounded Context. 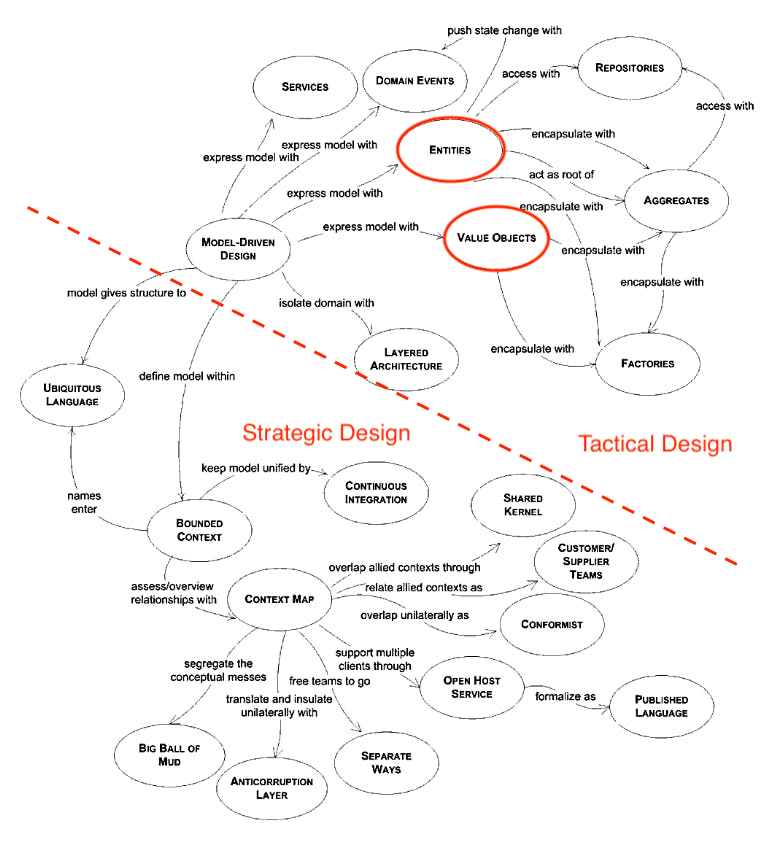 Besides just looking at the definitions of Entity and VO, I will also provide you with some guidance on how to distinguish them.

In this chapter, I will be explaining the concepts of an Entity and a VO. There are more building blocks in DDD, like Services and Domain Events (see the image above), but they will be out of scope for this post.

This is how Entities are introduced in the DDD book by Eric Evans:

Many objects are not fundamentally defined by their attributes, but rather by a thread of continuity and identity.

This sentence already introduces the main characteristics of an Entity: continuity (also often referred to as having a lifecycle) and identity.

An object primarily defined by its identity is called an Entity.

When you think of an Entity, imagine something that needs to be tracked over time and whose attributes are likely to change over time. In order to be able to keep track of something you need a way of identifying the object and answer the question "Is this the same object?" after time has passed. A very strong indicator for something being an Entity is something like a status attribute (like pending, active, or inactive) or attribute prefixes like current or last.

An object has to be distinguishable even though the attributes of different objects are the same. Think of an application for managing students enrolling in different courses at a university. A Student will be the same student if attributes like email or even name change. It is important to define what it means for a student to be the same student. Maybe it would be something like matriculationNumber or just a generic id. The following image shows a potential class diagram for this application, which I'll use as an example from now on.

This could be the database representation of an actual instance of the Student Entity (for simplicity the Course is committed as it isn't really required to prove my point later on):

You have to answer the question "What makes an object the same object?" from a domain perspective. Therefore defining the identity of an Entity demands understanding of the domain.

Be alert to requirements that call for matching objects by attributes.

Meaning that a requirement like "The object should be the same if the attributes are the same." is a strong indicator that it is probably not an Entity at all.

Entities are also called "Reference Objects". I like this term because I have an image in my head where a pointer (an arrow) is referencing the same object over time.

(In JPA the annotation @Entity is used for Entities.)

Many objects have no conceptual identity. These objects describe some characteristics of a thing.

VOs do not have an identity. They are defined by their attributes instead of an identifier. You can think of VOs as a complex attribute of an Entity.

An object that represents a descriptive aspect of the domain with no conceptual identity is called a Value Object. Value Objects are instantiated to represent elements of the design that we care about only for what they are, not who or which they are.

Think back to the student example in the Entities section. The Student could have an Address, which consists of street, streetNumber, postcode, and city. In the domain of our application, the address would be a VO. Changing one of the attributes would make it a different address. An address is more like a complex attribute type (instead of a primitive data type like string, boolean, etc.) of an Entity (or other VOs; in this case of the Entity Student). 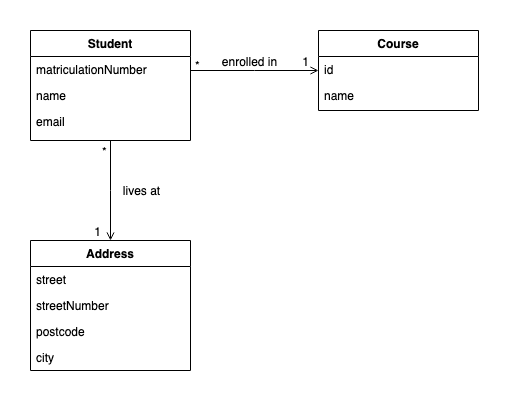 Not caring about the identity of an object gives us the freedom to simplify our design and optimize performance. We can now share instances of VOs because they are essentially like a complex attribute holding some information. BUT in order to do so, the VO has to be immutable. Changing VOs attributes has to result in creating a new instance and not in modifying the existing one.

Again, back to the student example. Think of two students living at the same address. They can share the same instance of the Address VO, but if one of the students moves somewhere else we don't want to mutate that instance because that would affect the other student as well. Instead, we end up creating a new Address instance (or reusing an existing instance of that address if it exists). Sharing a VO instance is shown in the next image. It also showcases the VO being like a complex attribute because it is ending up in the same row in the database in this case. 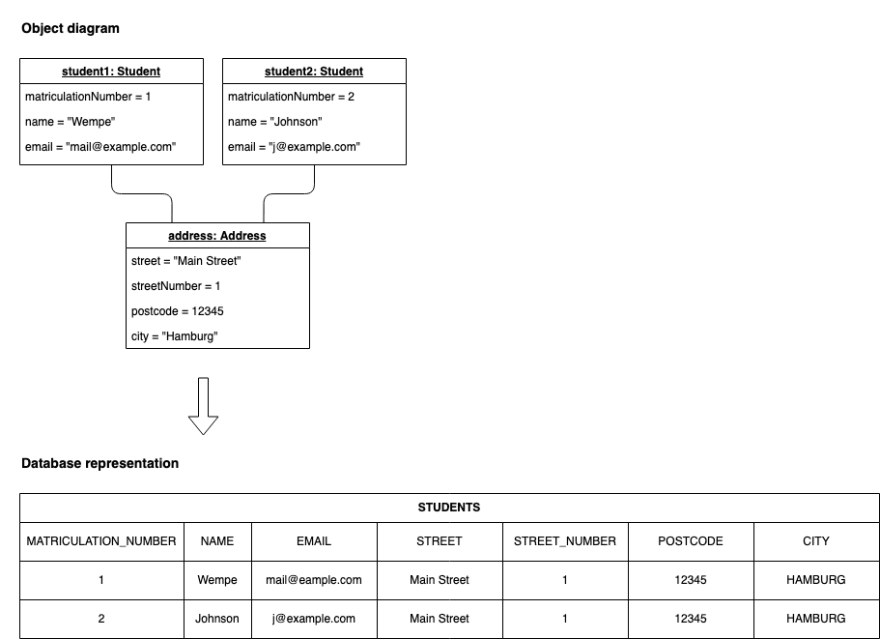 Do not attach artificial Ids to a VO. VOs are also not represented in their own table in a database. If you do so you would not only end up losing the benefits of performance and lower complexity of VOs, but you would also muddle the model making forcing all objects into the same mold.

Because of the aforementioned benefits of VOs, you should go with a VO as a default and only ever assign an identity to something (and therefore making it an Entity) if it is required to do so.

(In JPA the annotation @Embeddable (1:1) and @ElementCollection (1:n) are used for VOs).

This post focuses on Entities and VOs because they are similar but different. One question I asked myself frequently: "Is this an Entity or a Value Object?". Both are modeling actual data and are most often persisted in a database. But as we already learned, there are differences in Entities and VOs.

The following table showcases the main differences between Entities and Value Objects: 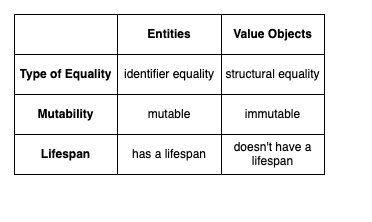 The following questions can help to identify an Entity or a VO:

Can I replace the object with another object having the same attributes?

If the answer is yes, it is a Value Object. As already mentioned, VOs are like a complex data type. You could also think of primitive data type as an integer as a VO. So, do your object is somehow like an integer?

Do I have to keep track of something over time?

If the answer is, it is an Entity. Entities allowing to keep track of information over time. Whereas VOs are like a snapshot of a point in time.

⚠️ *If something is an Entity or a VO depends on your domain. **It could be an Entity within one domain and a VO in another. Therefore statements like "Addresses are value objects." are simply wrong. An example could be money. In an eCommerce, application money will be like a VO, because it only represents the ability to buy something. $100 is $100. But when dealing with bank robberies you maybe do care about the specific banknotes and their serial number uniquely identifying it. *(I think you get the idea 🤪)

Entities and Value Objects are two of several building blocks of DDD which belong to the Tactical Design part of DDD. They both have the purpose of storing information and most often they end up in a database but there are differences, which I pointed out. Value Objects should be your go-to because they are less complex and allow for better performance. Go with Entities if you need the concept of identity.

There is way more about DDD and even several other building blocks. What would you like to have been covered next in this DDD series?