With this post I'm going to show how a modern and cloud native CI/CD could be implemented within a Kubernetes environment. I'll use two different tools:

This post doesn't try to be a master class about Tekton or Argo CD. It is only intended to set an starting point to explore both tools using them directly in a cluster.

Tekton is an Open Source framework to build CI/CD pipelines directly over a Kuberentes cluster. It was originally developed at Google and was known as Knative pipelines

Tekton defines a series of Kubernetes custom resources (CRDs) extending the Kubernetes API. Sorry, what that means? Ok, if we go to the Kubernetes official page, we can read the following definition:

Kubernetes objects are persistent entities in the Kubernetes system. Kubernetes uses these entities to represent the state of your cluster

So, examples of Kubernetes objects are: Pod, Service, Deployment, etc...Tekton builds its own objects to Kubernetes and deploys them into the cluster. If you feel curious about custom objects, here the official documentation is and you can also check the Tekton Github to see how these objects are. For instance, Pipeline or Task

Argo CD is a delivery tool (CD) built for Kubernetes, based on GitOps movement. So, what that means? Basically that Argo CD works synchronizing "Kubernetes files" between a git repository and a Kubernetes cluster. That is, if there is a change in a YAML file, Argo CD will detect that there are changes and will try to apply those changes in the cluster.

Argo CD, like Tekton, also creates its own Kubernetes custom resources that are installed into the Kubernetes cluster.

Are they ready to be adopted?

At the moment in which this post is being written, both tools are very "young". For instance, if we check the last releases we can see:

I also like to check ThoughtWorks Technology Radar...If we check them in the radar, will see:

So, we are facing two young platforms and that may imply that there are not many examples, documentation or even maturity failures, but it's true that both tools are called to be the standard cloud native CI/CD according to the principal cloud players.

And, talking about Argo CD:

We're talking a lot about "cloud native" associated to Tekton y Argo CD but, what do we mean by that? As I said before, both Tekton and Argo CD are installed in the Kubernetes cluster and they are based on extending Kubernetes API. Let's see it in detail:

We are going to build a simple CI/CD process, on Kubernetes, with these stages:

In this pipeline, we can see two different parts:

To execute this PoC it's you need to have:

I've used a single repo to manage the different projects. The repository is structured in this way: 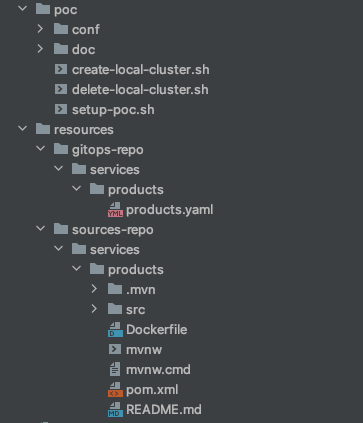 Ok, how can I execute it?

The first step is to fork the repo https://github.com/jaruizes/tekton-argocd-poc because:

It's necessary to add a Github Personal Access Token to Tekton can perform git operations, like push to gitops repo. If you need help to create this token, you can follow these instructions: https://docs.github.com/en/github/authenticating-to-github/creating-a-personal-access-token

** The token needs to be allowed with "repo" grants.

Once the token is created, you have to copy it in these files (## INSERT TOKEN HERE:

** In fact, for Argo CD, create secret with the token isn't necessary because the gitops repository in Github has public access but I think it's interesting to keep it in order to know what you need to do in case the repository be private.

This step is optional. If you already have a cluster, perfect, but if not, you can create a local one based on K3D, just executing the script poc/create-local-cluster.sh. This script creates the local cluster and configure the private image registry to manage Docker images.

This step is the most important because installs and configures everything necessary in the cluster:

** Be patient. The process takes some minutes.

** This message isn't an error. It just waiting for to Nexus admin password created when the container starts. When the Nexus container starts, at some moment, it creates a file containing the default password.

Once everything is installed, you can play with this project:

Tekton dashboard could be exposed locally using this command:

Then, just open this url in the browser:

By that link you'll access to PipelineRuns options and you'll see a pipeline executing:

If you want to check what Tasks are installed in the cluster, you can navigate to Tasks option:

If you click in this pipelinerun you'll see the different executed stages:

Each stage is executed by a pod. For instance, you can execute:

to see how different pods are created to execute different stages:

It's possible to access to Sonarqube to check quality issues, opening this url in the browser:

** In this pipeline, it doesn't check if quality gate is passed.

And It's also possible to access to Nexus to check how the artifact has been published:

As I said before, the last stage in CI part consist on performing a push action to GitOps repository. In this stage, content from GitOps repo is cloned, commit information is updated in cloned files (Kubernentes descriptors) and a push is done. The following picture shows an example of this changes:

To access to Argo CD dashboard you need to perform a port-forward:

Then, just open this url in the browser:

I've set the admin user with these credentials: admin / admin123 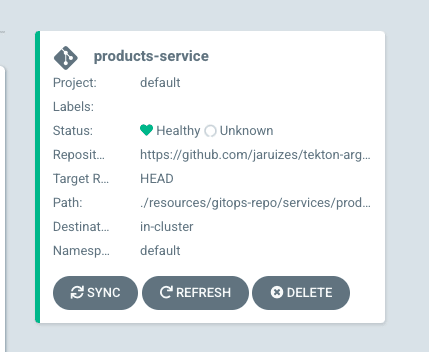 This application is "healthy" but as the objects associated with Product Service (Pods, Services, Deployment,...etc) aren't still deployed to
the Kubernetes cluster, you'll find a "unknown" sync status. 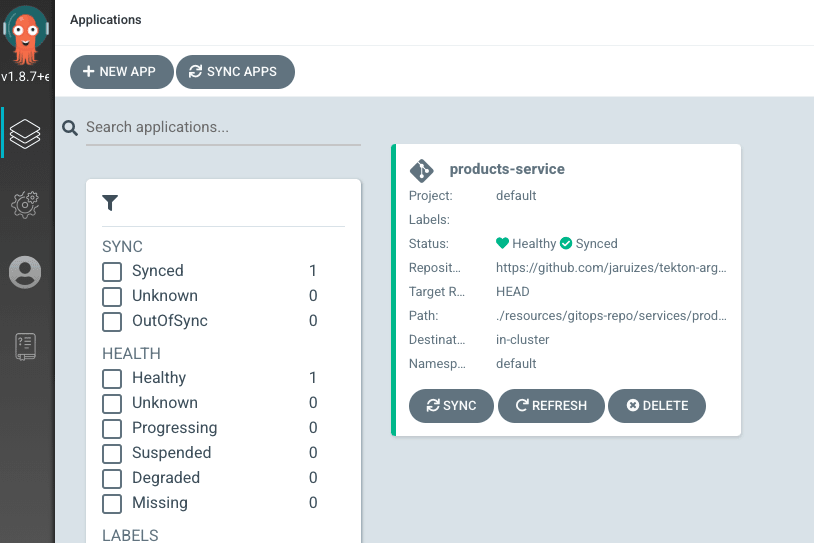 If you create a local cluster in step 3, there is an script to remove the local cluster. This script is poc/delete-local-cluster.sh


I hope you’ve liked this post. In next posts we'll cover Tekton triggers.

José Alberto Ruiz Casarrubios
I consider myself a software developer or technical architect but I like methodologies and exploring ways to build better software
Automate All the Boring Kubernetes Operations with Python
#python #kubernetes #devops
What is your go to coding playlist/youtube video?
#discuss #productivity #programming
Where There is Code There Should be a Review (but Why?)
#codequality #programming #discuss #career