Algorithms are something I struggle with. A few of the interviews or screening processes for companies I've done recently have involved algorithms. Being eliminated before even getting to speak to someone is very discouraging. In response, I'm being intentional about solving algorithms recently. This time I'll be tackling this Leetcode problem.

My job is to shuffle the elements of the array together like a deck of cards. This problem is simple with Javascripts .push() method.

The difficulty was increased when I approached it without push(). I was having trouble keeping track of the indexes I need access to, so I wrote it out on a whiteboard. After writing it out I was able to find the pattern. Stepping through every iteration really cleared up what counters I needed. 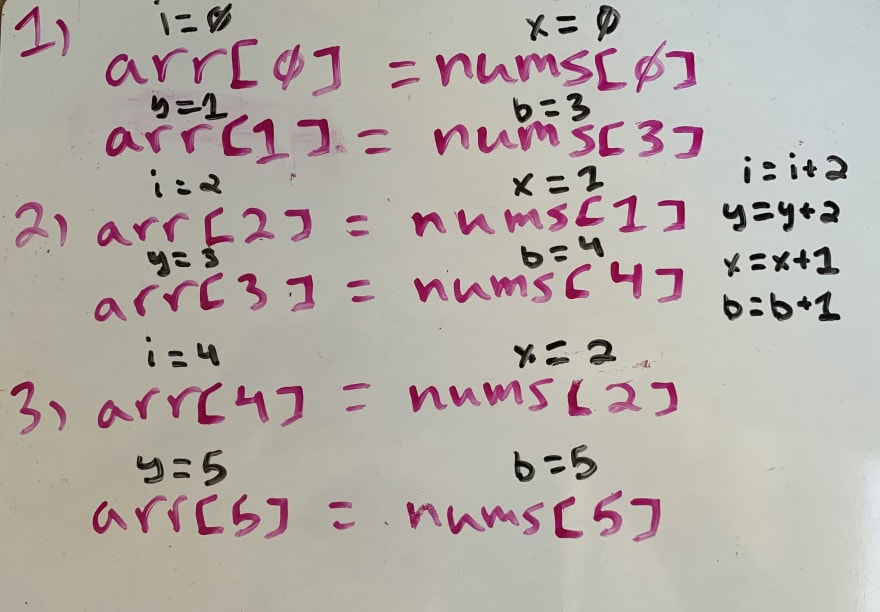 Once suspended, javila35 will not be able to comment or publish posts until their suspension is removed.

Once unsuspended, javila35 will be able to comment and publish posts again.

Once unpublished, all posts by javila35 will become hidden and only accessible to themselves.

If javila35 is not suspended, they can still re-publish their posts from their dashboard.

Once unpublished, this post will become invisible to the public and only accessible to Joe Avila.

Thanks for keeping DEV Community 👩‍💻👨‍💻 safe. Here is what you can do to flag javila35:

Unflagging javila35 will restore default visibility to their posts.