Have you ever worked on a bigger change for an app and struggled with the release schedule? Have you ever wanted to get feedback from users early but weren't sure when exactly the right time is? Here's a simple but effective prioritization technique that can help slim down your scope and give you more confidence in it with different stages that can be mapped to Alpha, Beta & Release.

But these strategies are designed for a higher-level kind of prioritization, as in deciding if you should be implementing feature A or feature B first or if feature C is even needed in the next version at all. They don't scale down to tasks or even sub-tasks of your features though, so it's quite possible to do too much within a specific feature. Also, they don't help answer when you can start putting the feature in users' hands for early feedback to apply user-focused approaches, such as the Lean Startup methodology. One could of course opt for a method that is independent of scale, like the MoSCoW method, but their categories wouldn't be easy to rate because they're so abstract that different people would have different expectations for each category.

The goal of the Laser Focus prioritization strategy I suggest in this article is to provide clear rating categories, help with task scopes and provide an easy to apply method for interpretation. All three aspects together help you stay laser-focused.

There are three goals we want to reach with our categories:

We're suggesting the following categories which fulfill all requirements:

Absolute minimum needed for the first round of testing. Can be ugly.

This allows for shipping a product with just "Vital" features or tasks implemented to a small group of testers to get feedback early. Of course, the scope of this Alpha testing should be made clear stating what basic features or tasks are still missing so they are not unnecessarily reported by the testers. But the vitals of the product or feature can be tested already and we get a first round of feedback if we're headed in the right direction.

Core aspects required for basic functionality. Can have rough edges.

A second and bigger round of testing can be started as soon as all "Essential" features or tasks are implemented. At this level, no specific testing scope needs to be communicated, it should be enough to call the version a "Beta" version where the base features are available but still a lot of things are missing or incomplete.

Ironing out rough-edges and completing aspects of functionality.

The "Completing" level defines the scope where the final product is ready to be released. In some situations, e.g. if a new version was announced for a specific date, the product can also be released while still, some "Completing" tasks are open, but then it should be publicly marked as "Beta". Typically this level includes all kinds of features or tasks that are important for a bigger customer base but are not relevant to evaluate the core of the product.

Nice-to-haves that can be delayed to later (versions) or skipped entirely.

The "Optional" level has the notion that the features or tasks rated as such are wanted things, but that they are in no way necessary to release a finalized version of a product, even long term. Hence they can also be easily delayed or scrapped if needed as per the resources of the team.

Nice-to-haves (at first sight) that can (potentially) cause more harm than improve things.

Unlike "Optional", features or tasks rated as "Retracting" should be actively avoided. That means it can make sense to document or keep them somewhere including the rationale why they should be avoided for long-term decision making. This saves time when the same idea comes up again sometime in the future. Also, if multiple people are involved in the rating, it can help identify the tasks where discussion might be necessary to clarify the effect of a task on the product.

The second pillar of the Laser Focus strategy is its multi-dimensional scalability. To explain what this means and why it is important, let's apply the categories we have so far with an example: Let's develop a stopwatch app to track time for different things done throughout a day. This is the initial list of feature ideas, rated using the Laser Focus categories:

Thanks to the categorization, we can already exclude two features from the first release and recognized even a feature we should probably never implement (6) that should be permanently documented. But more importantly, we now know that 4 and 5 are the "Vital" features to implement first. Let's start working on their sub-tasks:

No. I'm sure you noticed it already while reading/skimming through them. There's a problem. We have prioritized the features thinking about what's really necessary for being testable, for putting the app into users' hands. But now we have the same problem again, just on a different level. These tasks (and potentially also their sub-tasks) aren't all "Vital" for our very first version to put in users' hands. How can we fix this? Should we apply another rating for the tasks, too?

Yes, absolutely! This is actually a requirement in the Laser Focus strategy: Apply the rating on all levels down the road! Not necessarily above levels, where you are allowed to choose any alternative prioritization technique. But the lower levels from wherever you want to start from should all be rated like this. Let's assign the Laser Focus categories to the tasks, too and then see what this means for overall priority:

It's important to note that the reference value for the ratings of the tasks was the feature because it's the direct parent. This means that I asked myself the question "Is persisting Start/Stop actions into database vital or essential to the feature Start/Stop a timer?" and not to the app or anything else. This makes answering the questions much easier. 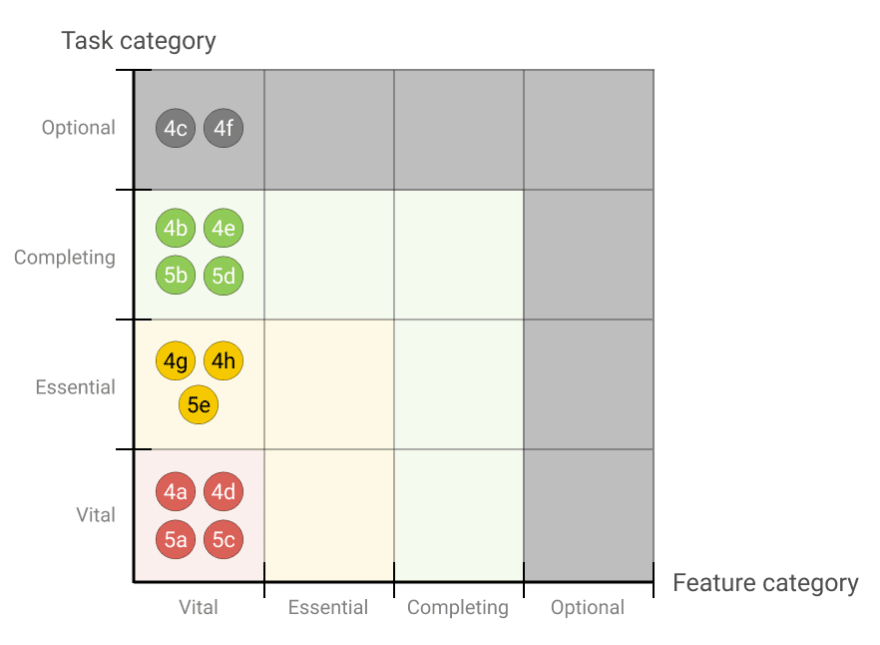 As you can see, tasks 4a, 4d, 5a, and 5c are in the bottom left field, the "Vital-Vital" field, or short "VV". The field's background is tinted red. It contains all tasks the focus should be on first. Once they're all implemented, the very first testing round can begin, the Alpha phase starts.

The "VC" field with its "Completing" tasks for the "Vital" features should be tackled last among the tasks we defined so far. Once all tasks in all green-tinted fields are done, it's Release time.

In the above example, we skipped the tasks for all non-Vital features. If we had rated them also, the full matrix could have looked something like this, including also the "Retracting" rating: 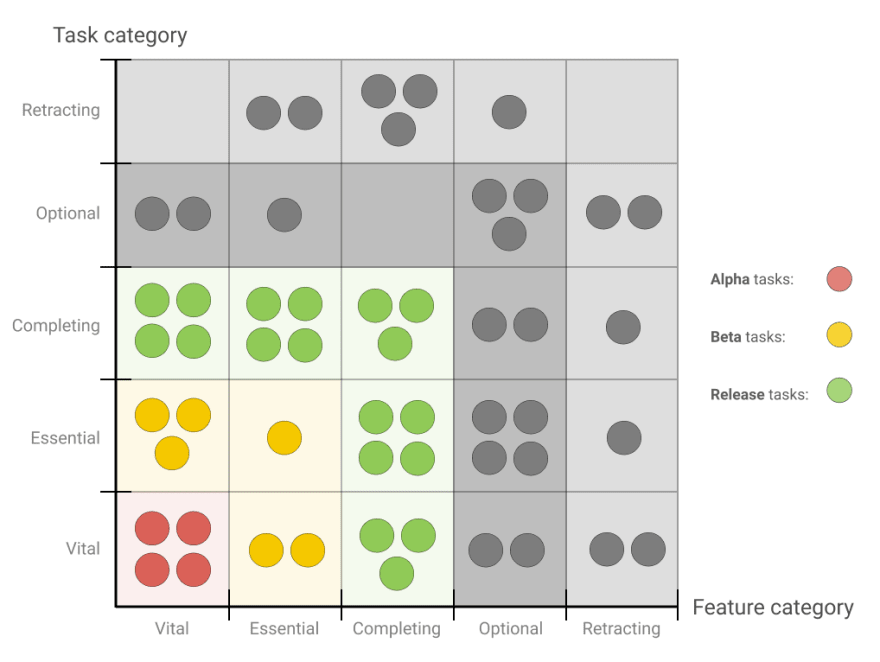 We can see how the Alpha, Beta, and Release tasks are circularly layered around the origin point (bottom left corner), visually providing us a priority for each task based on its distance to the origin. This easily scales to a third axis if for example sub-tasks were added to each task. Formally speaking, this scales to any number of dimensions. To calculate the overall category of any given element, just look up all ancestors and just select the lowest priority as the overall category of the "atomic" (lowest level) element. For example, imagine a sub-task with the category rating "Essential", a parent task rated "Vital" and its parent feature rated "Completing". Overall, the lowest priority is "Completing", so this is the overall category of the sub-task.

Calculating the overall category alone can lead to many tasks being on the same level, especially at "Completing" where we have 5 different fields. A way of prioritizing features or tasks within the same category is by calculating the average of its own category combined with that of all its ancestor's categories. To do this, let's assign each category a number (from 1 "Vital" to 5 "Retracting"), the lowest level (e.g. a sub-task) can then be represented by a tuple, e.g. (2, 1, 3) in the above example. The average of these numbers is simply calculated by (2 + 1 + 3) / 3 = 2.0. Another task with more ancestors and the same overall "Completing" category might be rated as (3, 2, 3, 1) and therefore have an average of (3 + 2 + 3 + 1) / 4 = 2.25, so it should be prioritized lower. The higher the overall average, the lower the priority – that makes a lot of sense as the average number roughly resembles the distance to the origin – the highest possible priority.

But don't worry, you don't actually have to calculate these averages, there's a simpler way based on the matrix we've seen above with enough precision: 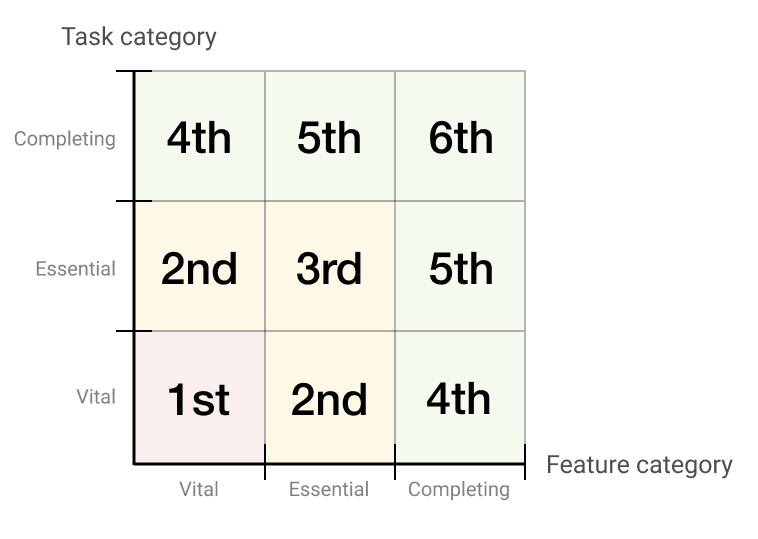 The above diagram shows in which order the fields should be tackled, based on origin distance. Note that there are two fields placed 2nd, 4th, and 5th each. For these fields, there's a choice to be made that can be different depending on the situation: Should we focus more on adding more features? Or should we focus more on improving the already started features? For a feature focus expansion first, you should continue in direction of the "Feature category", e.g. "EV" before "VE". For improving existing features first, it should be the other way around.

In the above section, we learned that categorization on multiple levels is key to the Laser Focus concept. If you try to apply this to your project right away, you may realize though that many or even all of your features or tasks are actually "Vital" or "Essential" to you. If this is the case, then it's a sign that you have probably not efficiently split your tasks yet.

That's why it's important to break down your tasks the right way before categorizing them. The guiding question you should ask yourself while splitting features into tasks or tasks into sub-tasks should not be restricted to "which steps do I need to make to finalize it". You should also think about the effort for each step and if the effort isn't negligibly small, you might want to consider splitting it away. Sometimes it might seem to be hard doing that, but more often than not, it's a good idea to follow the approach "make it work, then make it better" while splitting the tasks.

Ask yourself which parts have their own effort and split them so each task is worth being prioritized based on the effort needed. Don't split micro-tasks away, it's not worth prioritizing such small tasks, just keep them as part of another task.

A proper breakdown is very important for the Laser Focus strategy to be effective.

Apply these steps at any given time for your project and it will help you keep focusing on the important things and confidently putting your work-in-progress versions into users' hands early.

I hope this helps!

_This article was written by Cihat Gündüz

What Does it Take to Build a Successful, Cross-Functional Team?

A word on multi-threading: memory management

Once suspended, jeehut will not be able to comment or publish posts until their suspension is removed.

Once unsuspended, jeehut will be able to comment and publish posts again.

Once unpublished, all posts by jeehut will become hidden and only accessible to themselves.

If jeehut is not suspended, they can still re-publish their posts from their dashboard.

Once unpublished, this post will become invisible to the public and only accessible to Cihat Gündüz.

Thanks for keeping DEV Community 👩‍💻👨‍💻 safe. Here is what you can do to flag jeehut:

Unflagging jeehut will restore default visibility to their posts.