In 1968, Jay Earley submitted an appealing parsing algorithm on a dissertation wrote for his PHD. Unlike the typical LL and LR parsers often used in compilers, it can parse any context free text based on the input grammar. Its execution takes O(n3) time for worst cases, and linear for the best cases.

About language parser, I would recommend you to read A Guide to Parsing: Algorithms and Terminology and Mishoo's making a programming language from scratch to know more.

This algorthm came to my eyes from a comment parsing bug I met in protobuf.js, which is a LL parser (left to right, top-down, tokenizer + paser). And I was shocked by how messy and unreadable a LL parser could become. Then nearley.js appears when I searched around to see whether there is anything better. The words "parsing any language" attracted me, and drove me to explore the magic behind the backing algorithm - "Earley algorithm". So here is my "study report".

First of all, we will need a proper defined grammar like this:

To be clearer, I will use the format from nearley.js instead of BNF:

The left hand side of arrow -> is a term, the right hand side is the definition.

And this set of grammar requires a starting line just like the root of a tree:

Or symbol | rules could be expanded to 2 rules:

Then Earley used dynamic programming which is often demonstrated by a chart.

In his chart, column is a state set of cadidate rules represented by s[k]( s here is set, k is the matched term length).

To fill in the chart with the right state, we will first fill the s0 with the starting state P -> •S, and then go through the states that we have filled in and do 3 operations:

The scanner runs when the term after dot is a terminal. It checks whether a state could match the next term. If it matches:

The predictor runs when the next term after dot is not a terminal. It will "expand" the term suggest some new candidates from the grammar rule set.

The completor was most confusing operation to me. Well, it is indeed a completion of the parsing process, which traces back the rules matched before expansion.

It achieves that by going back to the starting state set, look for rules there that has term B on the right of the dot, once finish matching on the rule of term B.

1st, we will fill with the staring state:

Then we start going through each states available in a column from top-to-down with the 3 operations:

You may notice there could be multiple rules predicting or compliting to same state, but since we were using "set" for each column, dupicates will not appear. But if the dot position, or starting index is not the same, they are not considered as duplications. Therefore, S -> S + M•(0) and S -> S• + M(0) both exists in s3.

Now we have chart, then what?

A parser can produce grammar tree like AST, but now we only have a Chart with too much information that is confusing to tell the grammar tree from it directly. Well, Earley claimed the algorithm has solved the parsing in his dissertation, but obviously he didn't complete, or didn't describe the final operation clearly. Then developer like Loup tried to find their own solution instead.

I found nearley.js did parse gracefully. Here is roughly how it did.

First of all, we will need to add one more step in the chart calculation - record down the operation history of each state. Just like the red and grey arrows I drawed in the previous graph.

After finishing the chart, we will need to look for the last state, which originated from s0 and finished parsing (dot at the end). From this state, tracing the history recorded in step 1, like the highlighted items in the following graph: 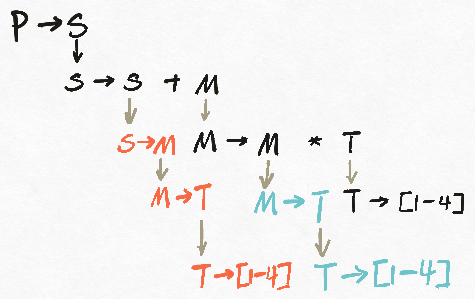 Yes, that is what we want for the end result.

nearley.js represents the tree via Array by default:

To transform the Array to a proper AST, you will need to configure a post processor for each rule.

Later someone found the Earley algorithm did not consider nullable terms.

A pesky problem with Earley's algorithm remained: nullable symbols. A symbol is a nullable symbol, if it represents something that might be omitted, Examples are the three expression's in C language for statements: any or all of these may be omitted. To be considered practical, a parsing algorithm must work well with grammars that contain nullables. - by Jeffrey Kegler

Well, I am not really sure about the nullable symbols he mentioned in C, but Aycock and Horspool raised a very simple solution in 2002 to deal with this - just add one handling in predictor to be able to ignore the the nullable symbol:

In the mean time, they also raised some other improvements with proofs: pre-compute the grammar set to skip the prediction during parsing; pre-convert some rules to equivalent rules and reduce the rules used in the parsing, etc.. These improvements together with lazy constructing techniques, will make it twice faster.

Advent of Code (in MiniScript), Day 4

Why is the Dashboard for Your Product so Important?

Submit button outside the form

Once suspended, jennieji will not be able to comment or publish posts until their suspension is removed.

Once unsuspended, jennieji will be able to comment and publish posts again.

Once unpublished, all posts by jennieji will become hidden and only accessible to themselves.

If jennieji is not suspended, they can still re-publish their posts from their dashboard.

Once unpublished, this post will become invisible to the public and only accessible to Jennie.

Thanks for keeping DEV Community 👩‍💻👨‍💻 safe. Here is what you can do to flag jennieji:

Unflagging jennieji will restore default visibility to their posts.