One of the fundamental topics that every developer needs to learn is version control and how to work with a codebase which could be updating and changing over time.

A version control system allows multiple people to work on a single project at the same time. Each person will have a copy of a project running on their computer, allowing them to make changes which won't affect the rest of the team. Once complete, the developer will be able to submit or push these updates to the version control system and ultimately merge their changes into the main project. The rest of the team will then have access to these new changes by pulling them down into their version of the project on their computers.

Each change will have a timestamp as well as information about who made that change, usually the developer's name and email address.

Git is a version control system used for tracking changes in a codebase during development. The purpose of Git is to coordinate changes among developers; it can, however, track changes in any set of files.

GitHub is a Git repository hosting platform that allows developers to store their code which can be publically visible or private from the rest of the world. It keeps track of the various changes made to each of your projects and presents itself in an intuitive and easy to use interface. It is free to use but also offers a premium plan. Read more about their features here.

The easiest way to get started is by creating an account on GitHub at the following link. Once you have created an account and you have logged in, you will be able to start creating repositories used to store your code. The home page will contain a feed which will display recent activity on repositories from people you follow on GitHub, so at first, you will not see anything here.

We are now ready to create our first repository! To do this, click on the + symbol in the top right of the screen, which will provide you with a few options, 'New repository', 'Import repository', 'New gist', 'New organization' and lastly 'New project'. 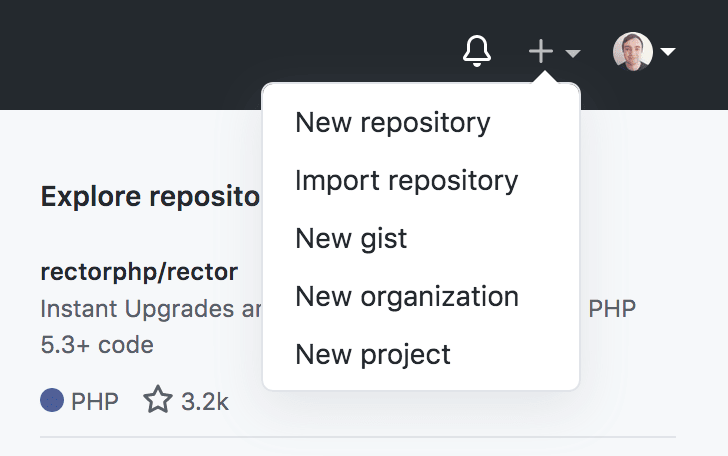 All repositories require a unique name on your account, along with an optional description. You can control who can see and interact with this repository by setting the visibility to public or private. Additionally, you may choose to include a README.md file, a .gitignore file and a LICENSE.md file, for now, we will not add either of these additional files. 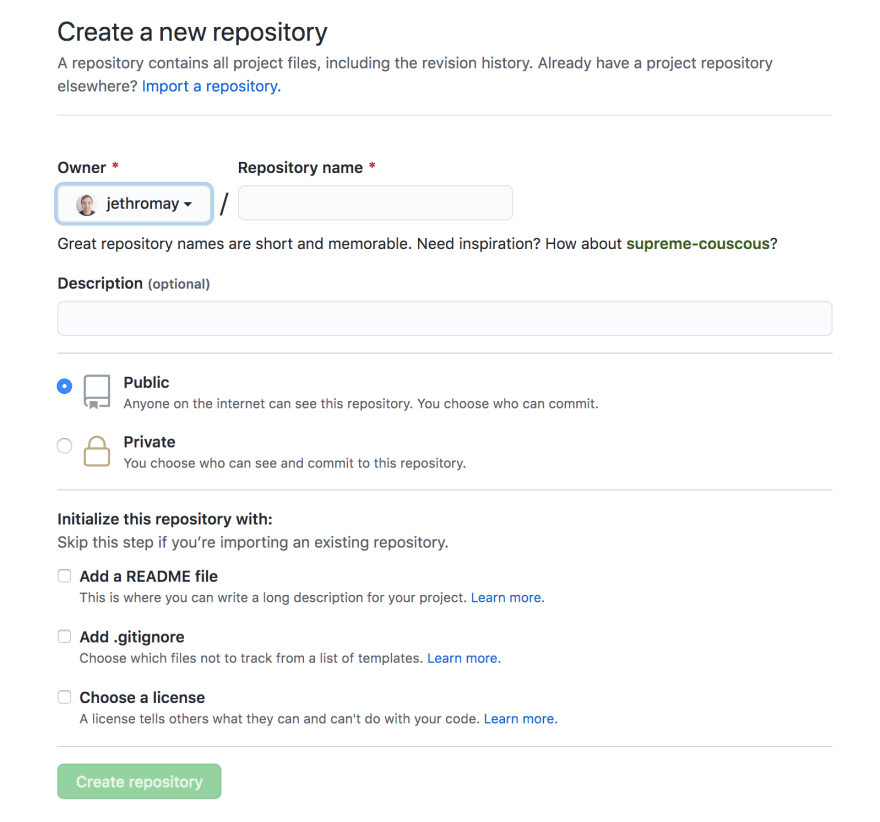 Once you have filled in the required information, click on 'Create repository' and you will be good to go!

The GitHub CLI (Command Line Interface) allows you to easily interact directly with your repositories and even the GitHub API (Application Programming Interface.) It's worth noting that you don't have to use this CLI tool if you choose to work with the command line, you can still work with Git without it.

For us to use this new CLI tool, we will install it with instructions found at the following link.

Once installed, open up a terminal window if you don't already have one open and the last step to take is to authenticate with our GitHub account. We do this by typing the following:

All interactions with the GitHub CLI start with 'gh' followed by the command. A full list of the currently available commands is available here.

Follow the prompts which will allow you to log in via the browser and type in a code. Once you have successfully logged in, it will ask you to select your default git protocol which will be either https or ssh. We won't be covering how to setup ssh keys, selecting https will be the final step in our setup.

Cloning the GitHub repository is quite simple, we will use the following command in our terminal:

Replace with the full URL to your GitHub repository and replace with the name of the folder you would like to store this code. (Don't include the left/right chevron symbols.)

Alternatively, if you run the command inside a folder that you have already created you can omit the directory and instead use a period. This will clone the repository into your current folder:

We are now ready to start adding and removing files from our repository.

Once you have successfully cloned a repository, you will now be able to push code changes as well as pull updates onto your locally running version of the project. At the time of writing this article, there are no commands in the CLI which will allow you to push or pull code, so we will use standard git commands to do that.

Open the project in any code editor of your choice and create a new file, for example, index.html. Once you have added a new file, you will be ready to push this new file to your repository.

Before pushing new changes, you must ensure that you have all of the repositories files in your local version of the project. Assuming you are using the default GitHub branch name, you will run the following command in your terminal:

Once you have pulled down any changes, you will be ready to add your files to a commit and push them to the repository. We can do this by running the following commands:

The first command will add the index.html file to your commit, and the second command will commit your file with a message. The '-m' option indicates what your commit message is, followed by the actual message. If you have a lot of changes, you can omit the 'git add' step and run the following command:

This command will add all of your new changes to the commit.

Our last step is to push the code!

Once you are happy with your commit and message, run the following command to push code to your GitHub repository:

We have only scratched the surface of what can be achieved with version control, covering the basics of what Git is, how to create a repository on GitHub, how to setup GitHub's new CLI tool, cloning a repository, pulling code and pushing newly created files.

There are many different aspects of Git that we did not cover, a few of them are:

If you would like this to become a series in which we cover various other topics, let me know in the comments or via Twitter!

Why you're not Productive?

Common Mistakes by Django Developers and How to Avoid Them