Code Smell: An indicator of a design principle violation 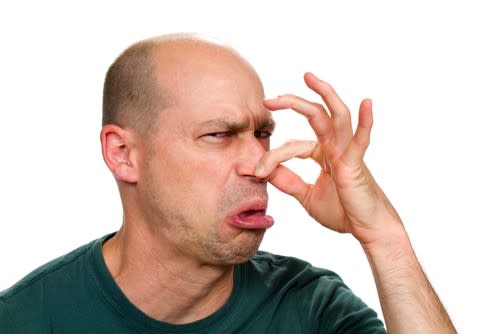 What are code smells?
The term was popularized by Kent Beck in the late 90s and its usage increased after appearing in the well known Martin Fowler’s book Refactoring. Code smells are indicators that something may be wrong in a piece of code. They are not a problem just because they are a smell, a deeper analysis is needed to determine if there is a problem or not.

In order to clarify, let’s see what code smells are not?

Okay, this isn’t scary, but then why should I be worried at all? Well, let’s see what code smell actually are:

Memorizing the list of code smells and understanding the complex idea behind each one of them, helps to reduce the conflicts within the development team regarding code discussions. There is no place anymore for arguments like: “I don’t like your code, but I can’t tell you why...”. They don’t miscommunicate or talk using ambiguous terms. When a person mentions the name of a smell, all the rest know exactly what it means and understand immediately the point of the discussion.

Let’s move to what we all came for, here is the list of code smells. They appear divided in 5 categories:

Bloaters: Things that grew too big

Abusers: Tools from OO that were misused

Dispensables: Elements that could been avoided

Couplers: Stuff that binds the objects together, therefore they cannot be used in any other context.

If you want to dig deeper in code smells, I leave here a link with much better explanations and code examples.

A code with smells is only a problem when you have to interact with it, but until that very moment, it is working software and it is not costing any money as long as it does not change. Think twice before refactoring something, most probably there is no need to clean all the smells of your code base, and certainly not all at once. Legacy code is perfectly valid and working software, beware if you decide to go into the mud.