Do we need state management libraries?

When it comes to state manage in React applications, there's a seemingly never ending discussion on the right approach. Do we go with Redux, work with the boilerplate code and embrace the additional complexity, consider MobX but shift to an imperative approach using an object-oriented pattern. Or do we stick with React and use the in-built functions, like hooks and Context API to manage our state.

Both approaches suffer when your application grows, and neither are interchangeable, given their contrasting approaches. This is when React state hooks and the Context API are introduced, and as advocates will tell you, it's just easier to handle state using React.

There are plenty of alternatives to using redux, but none really address the core issue of state management; how do you manage application state as the application grows? One of the reasons why Redux has been so popular, is because it solves the problem of prop drilling, that intricately links components through dependencies of data. 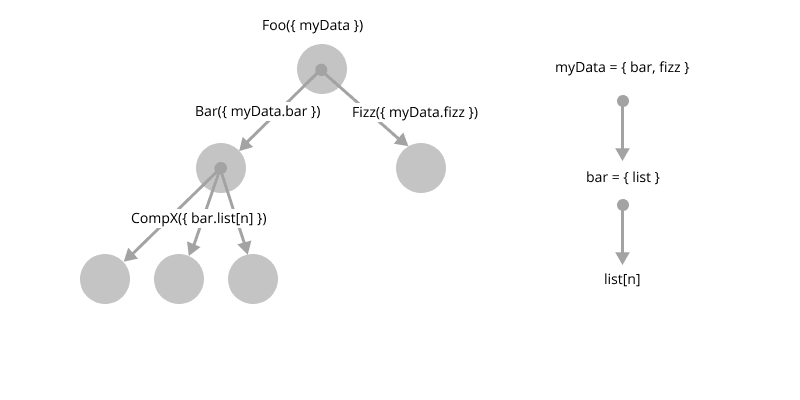 The issue with redux-like libraries is that components and data are inexorably linked; components are dependent on redux and cannot take updates from the redux stores, without being redux components. This tight coupling is a choice that has to be made at the start of the project. Libraries like MobX are more flexible in their approach, but you still have to issue of state-to-component coupling, it's unavoidable.

What about using React to manage our state?

Utilising the Context API allows us to pull in state as we need it, perform necessary operations and then commit our changes. Any components that depend on that context, with that data scope, will automatically receive the updates. Sounds great right? Well, here's the kicker. Context API can be used to manage application state, but how do you manage the scope? It typically ends up being prop-drilling shifted elsewhere, more often than not, in the Contexts. 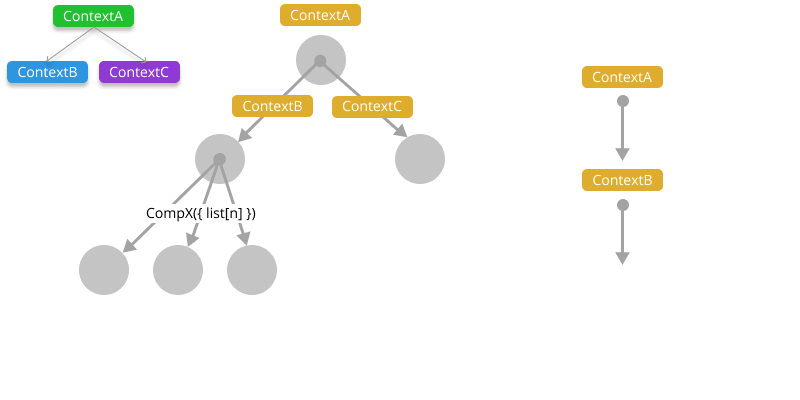 We can combine useState with the Context API, use deferred actions like useEffect, useMemo and other hook functions, or the equivalent functions with class components, to achieve a very-React way of doing things. But, how do we know what the state of our Context APIs are, or which ones we need to import, or which ones we need to update? How about asynchronous actions, race conditions, immutability?

Context API and React hooks don't solve this issue, which is what libraries like Redux attempted to solve in the first place. Which brings us full circle: React prop drilling (React) → Redux/MobX (Lib) → Context APIs and hooks (React).

Why use Redux or MobX?

One of the benefits that Redux brings is the approach to decouple of the state from the component. The side effect of that effort, is that state management is far more abstract than providing a simple API, or even using dereferencing (MobX) to directly update state. 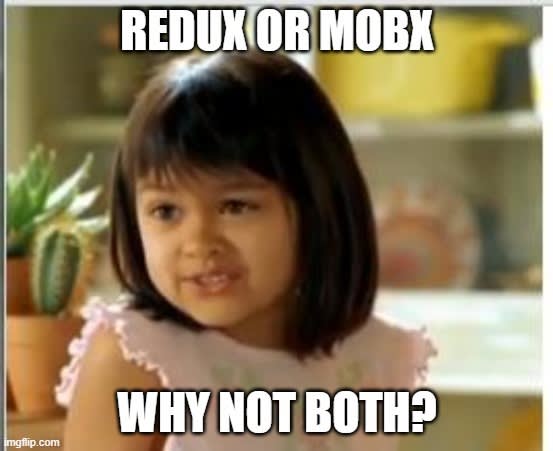 How often have you heard a developer say they would rather work with Redux, sagas, epics, middlewares and actions, over a direct approach like MobX or the Context API? Dereferencing is the far more understandable approach, certainly for developers learning how to manage application state. You lose a lot of what Redux provides you, but you also do away with an extraordinary amount of boiler plate code, just to get redux started.

Let's create our context first, this is the same for all approaches except Redux which bundles its own Context provider:

Let's use the Context API:

Let's take a look at the approach with MobX:

Now let's look at Redux (notice how we don't use the Context that we've created, follow the guide here):

Is RxJS a viable option?

For anyone familiar with Angular development, RxJS drives state management. User driven events, such as input value changes, button clicks, checkbox toggles and more, are fired by observables. Managing state in an Angular application is an asynchronous task; you fire the event, your UI will respond with the updated data. You can still add libraries like MobX and Redux to Angular, and many have done that, but there is a significant complexity penalty with taking that approach. Compared to Angular, React is as simple as it gets.

But let's not take it easy breezy and be unabashed with our approach to state management. It still needs to be carefully considered, thought out and well designed. After all, there's likely to be nothing more important in your application, than managing its state.

Which brings us to RxJS, and using the asynchronous tools to manage state.

I'm not going to tell you that it's easy, or that it's a simpler approach to state management in React, because it isn't. But what complexity it does add, certainly with boiler plate code, the benefits you get are far more advantageous than some of the options available.

Let's have a look at the example application that I've created on GitHub and discuss some of the approaches taken towards managing state.

The API function getStore takes two inputs - the store name and the query path, a period-concatenated string of object literals, as well as an array filter function:

Unlike MobX where dereferencing data in an observing object provides obserable behaviour on mutation or assignment, like Redux, the user needs to fire off an update event. You create a reducer that responds to update events, and then update the state dependent on that call. Where RxJS shines is that an event is an arbitraty event, you can opt to send data with the event, so that observers can instantly consume the new state without querying the store:

To load this approach into our application, we need to:

The benefit of this approach over Redux is that we leverage the Context API, adding rich functionality on top of it, and leveraging the flexibility of the Context API to inject different streams of data whever we need it.

Let's say you have a user management state object on top of your todos. This isn't something you want to risk leaking into your wider application, so you would want to separate the state. Using the RxJS approach above, you would initialise a new state container and provide that through the ContextAPI.

Like Redux, there is boilerplate code to get going, but the one thing we're not doing with our code, is creating higher-order components to inject store data as props into our components. That approach would be handy, it would be great, but that should be a separate, opt-in approach.

The benefit that you do get with RxJS is simplicity over complexity. It's not as easy to use as the Context API or MobX, but you know through the naming conventions of the state utility functions, what happens where. Combining the observers with useEffect would be ideal, so that you can subscribe/unsubscribe as the data changes, but more importantly, unsubscribe from all store subscriptions when the component unloads.

This sample application is not intended for production use; it's a proof of concept to prove that an observable approach is possible, accessible and should be considered a viable alternative.