In this episode, we implement event publishing to Apache Kafka from the auth service, making use of Confluent's .NET client package.

Note: depending on your preference, you can check out the following video, otherwise, skip to the written version below.

In the previous episode, we took a break from code to introduce the basics of Apache Kafka. In this one, we'll start implementing things to integrate Kafka in our system.

For the Kafka publisher implementation, we'll use Confluent's .NET Client.

Before getting on with business, to situate ourselves in the event-driven integration path, we can take a look at the diagram introduced in episode 40: 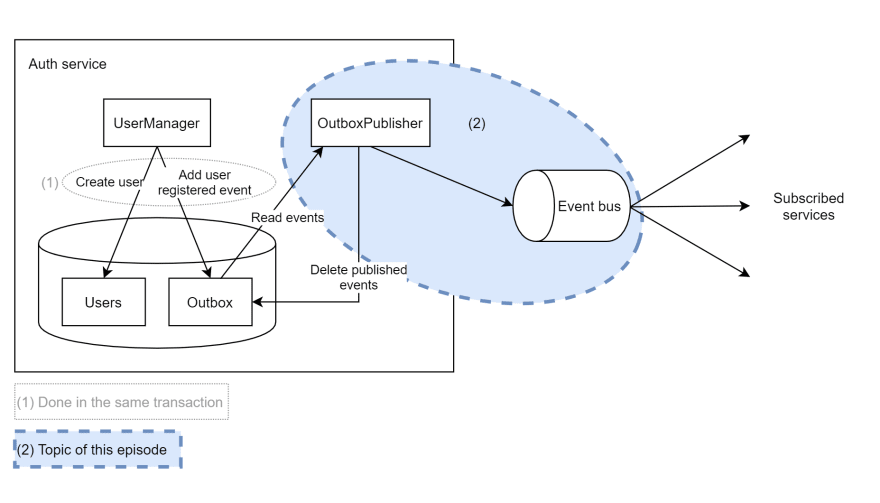 As we'll likely want to publish events from multiple services, not just the auth service, instead of adding the event publishing abstraction to this project, we can create it somewhere to be shared. With this in mind, there is a Shared repository in the AspNetCoreFromZeroToOverkill organization we can use to add this code.

After creating the required project to keep our developments, we can create the interface. The goal is for the interface to be very simple, to hide unneeded complexity from the services that need to publish events. For this reason, the IEventPublisher exposes just a couple of methods, one to publish one event, another to publish a collection of events.

Well, that's about all for the interface 🙂. Like I said, as simple as possible, for the services to be able to easily publish an event.

When configuring the implementation to use in the auth service, which will happen at the dependency injection level, there will be more Kafka details visible (as we'll see in a bit), but for the remaining code to request an event being published, it can be simplified to this point.

Created a sub-folder named Kafka in the project, then created a new class named KafkaEventPublisher (the Kafka prefix is redundant given the namespace, but let's ignore that 😛).

The class itself doesn't do too much, as it's basically just an abstraction on top of the client provided by the Confluent.Kafka package.

Let's skim through the main parts of the class.

We get some things we need as constructor parameters:

Then we make use of these things to initialize the NuGet package provided client.

The ProducerConfig we can see being instantiated, has far more options than the ones used here, so be sure to check them out. Right now, we're only setting up the Kafka servers to connect to, as well as the partitioner operating mode, which is set to Consistent, which will use a hash of the key to consistently deliver the records to the partitions, enabling records with the same key going to the same partition.

As for the rest, setting up the provided serializers and building the producer instance.

After that, we have the publish methods.

The publish methods simply make use of the producer instance to send the events to Kafka.

The first one is a direct call to ProduceAsync, while the second one iterates over the provided collection of events. This second one is a naïve implementation, as doing things this way will result in worse throughput, so it's probably worth it to investigate ways to not make everything sequentially, while keeping in mind that trying to parallelize everything can cause ordering guarantees to be lost.

Warning ⚠: this section is about overengineering 😅.

As you might have noticed, the KafkaEventPublisher we just saw is bound to a specific Kafka topic. This means, given the way it was implemented, we need different instances to publish to different topics.

This could be avoided, for example, by passing in the topic as a parameter of the publish method. Instead, I wanted to simplify the client code as much as possible, so my idea is to have an IEventPublisher instance injected, the client calls publish with the event(s) and everything else is taken care of. This results in a good amount of overengineering.

Given the likely unneeded complexity of this part, with reflection and expression trickery, I'm not going to put the code for the TopicDistributor class here, but as always it's in the GitHub repo.

In case you check out the code, the gist of it is:

I have no desire to invest too much time in setting up Kafka, so I tried to find the easiest and quickest way to get it running locally 🙂.

My idea, like we did for the PostgreSQL database, is to use Docker to quickly get things running. It is however not as simple, because Kafka has at least one dependency, ZooKeeper, and it would be nice if we had some way to inspect what's going on in Kafka.

While investigating the subject, came across a repository by Confluent with sample Docker compose files, to get Kafka and related services up and running.

To get things running for our project, copied the contents of cp-all-in-one relative to Kafka, ZooKeeper and the Control Center, so now the Docker compose file I use to start dependencies looks like this:

Don't ask me about all these options, I just copied them from the sample Compose files 😅.

Now that we have the core bits ready, we can go through some remaining details to get things working.

One of the things we saw was needed, was to provide a serializer for the keys and values of the records we want to push to Kafka.

Ideally, we should go with something like Apache Avro or Protocol Buffers (protobuf), but to keep it simple for now, we'll just use JSON, particularly the Newtonsoft.Json package, so we have inheritance issues figured out for us. Inheritance support is helpful because we want to publish events of different types to the same topic, and this is a way to achieve it.

To be used by the Kafka client library we're using, we need to implement the ISerializer and IDeserializer interfaces provided by it.

First thing, setup things in DI. In the EventExtensions.cs file, added a couple of calls to helper methods defined in the EventBus library:

In both cases, the methods simply call the classes' constructor, passing it the given parameters, then adding them as singletons to the IServiceCollection.

Using the IEventPublisher should be pretty straightforward with everything in place. In the outbox publishers we created in previous episodes, we inject an instance of IEventPublisher<BaseAuthEvent>, then use it where we previously had a log.

That ToBusEvent method maps the database event type to a type contained in a separate project, CodingMilitia.PlayBall.Auth.Events, which contains all the events that can be published by the auth service, that can be shared with other services which want the consume said events.

Now we can run the application to see things in action. In the application we can do some action that causes an event (e.g. register a new user) then head to the Confluent Control Center, look at the topics and see what we can find there. 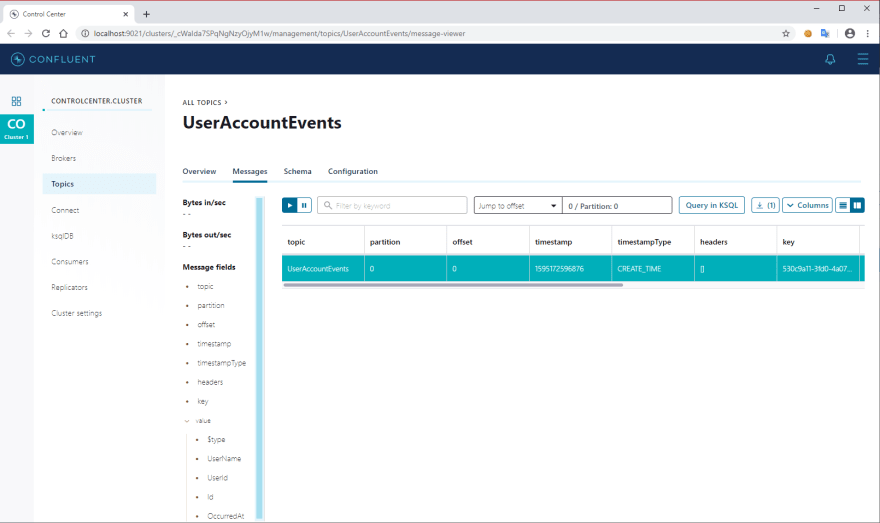 We can see we have a message there. If we scroll to the right, we can see the contents of the message. 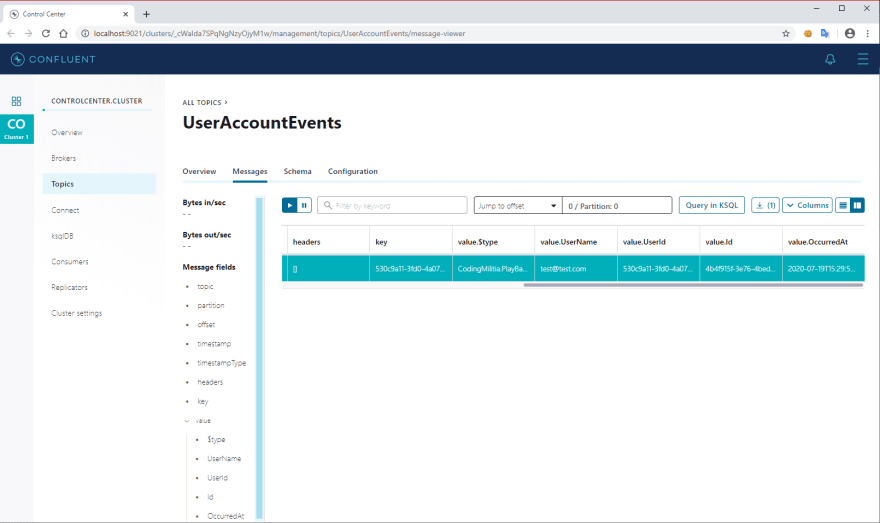 Looking at it, we also notice that the record key matches the user id in the event, as we set things up like that to ensure the events for the same user go to the same partition.

That does it for this episode, where we finally got events published from the auth service to Kafka. In the next episode, we'll implement the consuming end on the group management service.

The source code for this post is in the Auth and Shared repositories, tagged as episode045.

How to Automate Kafka Topic Management