Following up on the previous episode on ASP.NET Core middlewares, in this episode we take a look at MVC's filters, an MVC specific way to add behaviors to our request handling pipeline, and how we can use them to implement cross-cutting concerns in our web applications.
For the walk-through you can check the next video, but if you prefer a quick read, skip to the written synthesis.

Like introduced, given the previous episode focused on ASP.NET Core's middlewares, taking a look at MVC filters right after it, makes sense to me, as it provides some different options to add behaviors to the request handling pipeline, even if in this case more specific to MVC features.

Going back to the docs for an image that illustrates how the filters fit in the overall picture. 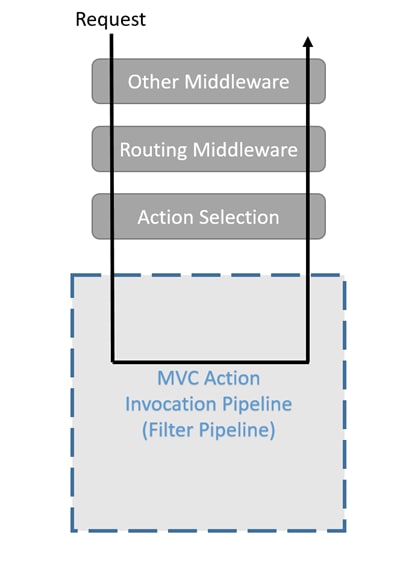 There are 5 types of filters, as seen in the docs:

The following image (from the docs again) shows some more details of how the filters play together.

In this post we'll only use action and exception filters, as well as the options we have on how to implement and use them. The other filters should be similar in terms of implementation and usage, having of course different reasons to go with them.

Let's start simple, with an action filter registered to intercept all requests that find their way to an MVC action.

To do this, we start by creating a class that implements IActionFilter (or IAsyncActionFilter if we need to do some async work on there).

Rather straightforward stuff. We implement the interface methods OnActionExecuting and OnActionExecuted (which run before and after the action executes respectively).

As usual in my post examples, I'm logging stuff 🤣 The content is not that important I would say, it's just serving as an example of some of the information we have access to in the context of the filter.

We can also see that we can get dependencies injected, as we're getting a logger in the constructor.

A sample log output for this filter would be as follows:

Decorating a controller or action with a filter attribute

Having a filter applied globally is nice, and may suffice for a great amount of cases, but sometimes we really need more control over when the filter should in fact execute. A good way to achieve this is by using attributes, with which we can decorate a controller or an action where we want the filter to be used.

Let's make another silly sample action filter to check this out 🙂

In this example, we're checking if there is an action argument named model and then if it is of type GroupViewModel with id 1. If it is a match, we alter the contents of the object, just to show we can 🙂

You might notice we don't have any dependencies being injected, and that's because by rolling an attribute like this, we can't have them, because we would need to pass them when applying the attribute, which isn't really doable (but we'll see in a bit how we can have a filter applied using an attribute that is able to have dependencies injected).

To apply the attribute, we can go into our GroupsController and apply it to the class directly, or to any method - but to see it working we need to apply it to the Edit method, the others will not make use of it.

To see the end result, we can create a group, then edit it, and we'll see the added text.

Applying a filter using an attribute is nice, but as mentioned, doing it like shown in the previous section doesn't allow us to do much, as we can't get any dependencies in the filter class.

Let's look at some options to have the cake and eat it too. Let's start with creating a sample exception filter.

Simple stuff, any time an exception is thrown (and not caught) in an action, it'll end up in the DemoExceptionFilter, and if it's an ArgumentException we respond with a 400. Now let's use the filter.

Besides adding the attribute, we also need to register the DemoExceptionFilter in DI, so the ServiceFilterAttribute can fetch it.

An alternative to ServiceFilterAttribute, if we require more control over things, is to create an attribute that implements IFilterFactory.

When implementing IFilterFactory.CreateInstance we get an IServiceProvider instance as argument, so we can fetch anything we need from the dependency injection container. In this case we're simply getting a filter instance from DI, but we could also complicate things if needed.

The IsReusable property is usd to tell the runtime if the filter instances returned by the factory can be reused across requests. If it was a singleton filter, sure, but when it's not the case, IsReusable should be false.

To use it, we can simply go into GroupsController and replace the ServiceFilterAttribute with this one.

Like I said in the beginning, this is just a quick look at some of the stuff we can do it MVC filters, just so we are aware of our options when developing an application, maybe we recognize that some pattern would map perfectly to an MVC filter (or maybe a middleware like we saw in the previous post).

As always, the docs are a great place to learn more about all these topics, with lots of info I'm not able to cram into these quick posts.

Please send any feedback so I can improve and adjust the next episodes.

How to use Hashids with AutoMapper