This is a tale of a good amount of hours of wasted time, so I’m going to document it so I remember it in the future 🙂.

One of these days, while implementing a web API and respective OpenAPI/Swagger documentation, I wanted to treat a complex type as a simple one, passing it in the query string. I had done this in the past, but getting things from the route and with no Swagger involved, so I assumed it would work the same. Apparently not, and hence the story begins.

Side note: I’m using ASP.NET Core controllers in this specific case, but I’ll leave some notes regarding doing the same with minimal APIs towards the end.

Prologue: why treat a complex type as a simple type

Before getting into how I got things working, it’s probably worth to mention why is it even relevant to go through these troubles. I won’t take too long explaining the reasons though, as you probably already heard this a bunch of times: avoiding primitive obsession.

Andrew Lock wrote a series on avoiding primitive obsession, with a focus on ids, but others, like Jimmy Bogard and Vladimir Khorikov also wrote about it.

Very briefly, the idea is to avoid using primitive types for everything, so we have types representing specific concepts, centralize logic specific to them, as well make things more type safe in general.

With this in mind, I have a type like the following:

As you can see, the type itself is just a wrapper around an int (hence the name 🙂). In this case, I don’t have specific logic, just wanted to encapsulate the int value as a detail, so I can pass SomeWrapperType around the application.

We also have a TryParse method to help with creating an instance of the type from a string (similar idea to int.TryParse or Guid.TryParse).

As I briefly mentioned, in the past I did something similar, but getting the parameter from the route, instead of the query string, plus, and more relevant, no Swagger was involved. I assumed it would work the same, so tried the exact same strategy: created and configured a model binder.

As we’ll soon find out, not only didn’t it work as well as I hoped, but it’s even overkill, but we’ll get there. Before that, let’s quickly see the model binding bits.

Starting with the model binder, we have:

A bunch of boiler plate, but you can find the relevant part towards the end, in the last if, where it’s using the SomeWrapperType.TryParse to try to get an instance of the type from the provided string.

Additionally we need a model binder provider, to hook things up with ASP.NET Core:

And finally, configure it:

If we run this now, what do we get? 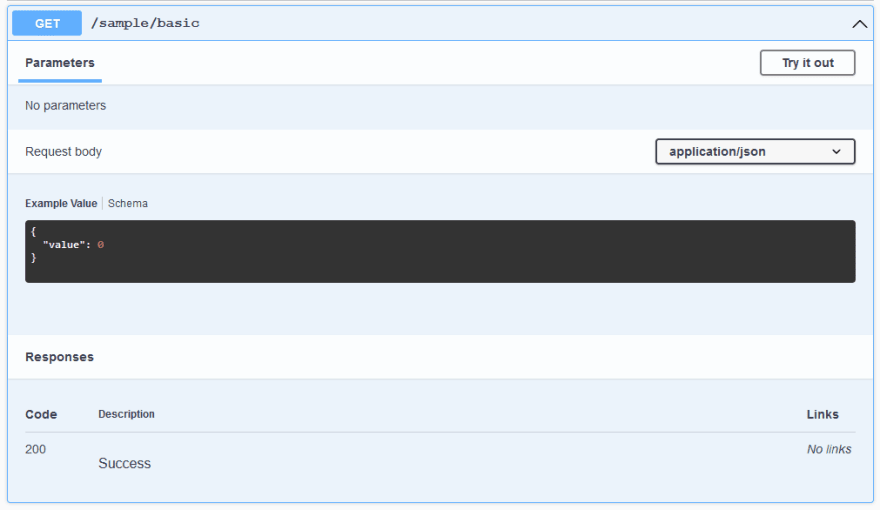 So... something’s not great... not only is it not being treated as a simple type, but it’s showing up as part of the body, which in a GET request, is unexpected at best.

Part of it makes sense, as I added a model binder, but as we’re finding out, that doesn’t really contribute to the metadata required to generate the OpenAPI/Swagger bits, so it still shows up like that.

If we look at the available schemas, we see SomeWrapperType in there, further showing that it’s being treated as a complex type.

So, if the problem seems to be lack of metadata for docs generation, let’s try to add some.

When configuring Swashbuckle (which is the library I’m using here for Swagger stuff), we can add info about specific types. In this case, we can do the following:

With this in place, SomeWrapperType should be treated as a simple type, in this case, like a regular string. Let’s see what happened in the Swagger UI: 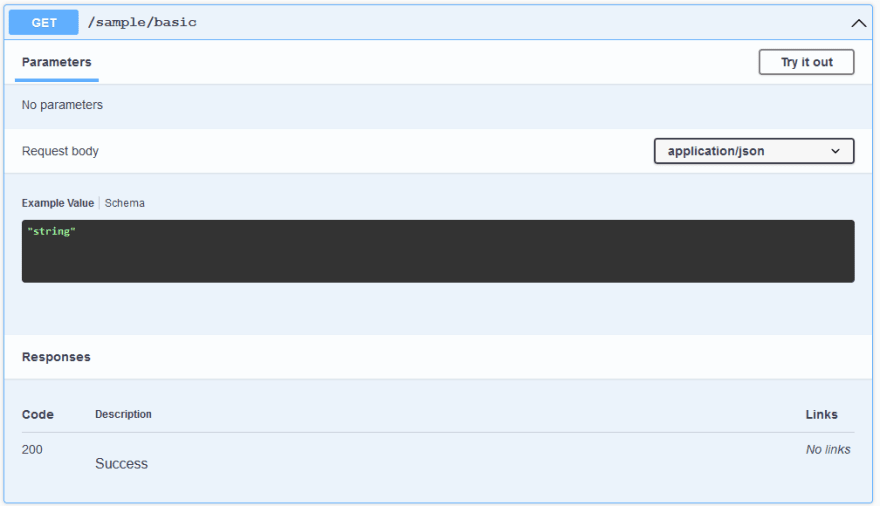 So, we have improvements, as now the type is being shown as string (and no longer shows up in the schemas section), but it’s still showing up in the request body.

Things showing up in the request body that shouldn’t, should be as simple as adding the [FromQuery] to the parameter, right? Let’s try it!

Almost, but we’re still not there!

As we can see, we now don’t have a body, the parameter moved to the query string, but as we further inspect, the parameter should be called wrapper and be a string (as we configured with Swashbuckle). Unfortunately, we see the name Value and type int, both referring to SomeWrapperType's internal property.

At this point, I was getting annoyed and going further down rabbit holes and model binding shenanigans, but remembered to check Andrew Lock’s series of posts on strongly typed ids, to check if he touched on this, which fortunately for my sanity, he did (minus Swagger specifics).

And the answer is: type converters, which “Provides a unified way of converting types of values to other types, as well as for accessing standard values and subproperties.".

Going back to SomeWrapperType, did the following:

As we can see above, created a class inheriting from TypeConverter, implemented the conversion from string to SomeWrapperType, and finally used it with the TypeConverterAttribute.

Going back to Swagger UI...

... and it finally works as desired (and the FromQuery attribute isn’t needed).

A quick note that, even if we could get rid of the model binding bits (other than the type converter), the Swashbuckle configuration is still required, otherwise it’ll still show up as a complex type in the docs, even though it works as expected on the implementation side.

Quick aside: it “just works” with minimal APIs

As a final piece of info, as I’ve also played with the new ASP.NET Core minimal APIs (which seem to be controversial for reasons that I don’t understand), everything would “just work”, without implementing most of the things described here.

Using this new approach, the existence of a TryParse method with a signature like I showed earlier, as well as a BindAsync method, are detected and used for parameter binding (more information on the official docs).

That does it for this mythical journey, full of twists and turns, where at the end we find out, a straight path was available right in our grasp 🤣.

Hope this can help someone avoid my mistakes.

In summary, for a complex type to be treat as a simple one when getting its value from the query string:

Auth0: implementing a device flow in a Console Application with .NET 7