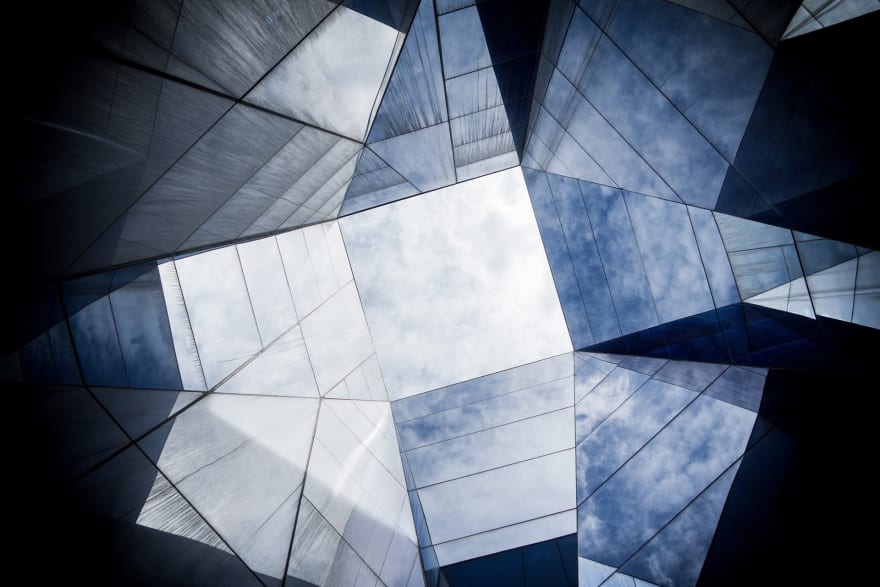 In the “Leveraging Salesforce Using Spring Boot” article, I navigated the course for introducing a Spring Boot service that would leverage the well-established Salesforce RESTful API. The goal of this service was to act as a middleware layer; that way, clients not written in Salesforce could retrieve and update contact data stored in Salesforce. This backend service implemented its own caching layer to provide a faster response time and also cut down on the number of times Salesforce needed to be called.

In “Leveraging Salesforce Using a Client Written In Svelte,” I introduced a simple client written in Svelte, which made it possible to update the Salesforce data using an inline editor—again, without actually using the Salesforce client.

The “Leveraging Salesforce Using a Client Written In Vue.js” article introduced a client application using the Vue.js framework to further interact with the Spring Boot service. Using Vue.js, the resulting client was not only able to read data from Salesforce but also processed and displayed updates made to the Salesforce data via a server-sent events (SSE) implementation.

In this article, we will use the Angular framework to complete a new feature request. In this example, the same contact data from Salesforce will be utilized in a drop-down list to avoid having a different source of contact data.

Revisiting the Example Use Case

Let’s briefly recap our example use case: The Business Call Center is about to launch a major marketing campaign. However, they recently discovered that the title generated for the list of contacts was incorrect approximately 90% of the time.

A team of interns has been updating contacts using the Svelte client, and the managerial team has been using the Vue.js client to monitor the updates as they occur, complete with server-sent events appearing as toast messages. Executives have been monitoring the progress using their Android and iOS devices from native clients which have been deployed.

The feature team responsible for the new widget product line has realized that they too can benefit from the contact information stored in Salesforce. The following requirements have been added to the widget application:

The feature team for the widget product line is planning to start this work right away and should have everything they need based upon the results of prior work completed for this series.

As a point of reference, below is a link to the Spring Boot service which has been used for this entire series:

Angular is a TypeScript-based web client framework that is led by Google and fueled by a very large open-source community. Of all the frameworks I have used in this series, Angular is certainly the largest—almost to the point where it may be better to call it a platform.

Some benefits of using Angular are noted below:

Personally, I have been involved with enterprise web applications running in both AngularJS and Angular since early 2014. While Angular is designed to handle large-scale applications, I have been equally successful in using the same framework for small and simple applications.

Getting Started with Angular

For this article, I decided to step outside of my comfort zone by giving version 12 of Angular a try. (As a point of reference, I last used version 9 for the fitness application I wrote for my sister-in-law in my “Using Heroku to Quickly Build a Multi-Tenant SaaS Product” series last year.)

Since my Angular command-line interface (CLI) was still on version 9, I needed to use the following command to upgrade to version 12 of the Angular CLI:

First-time users can use this same command as well.

Issuing an ng version command provided me with the following results:

To create a new Angular 12 application, I issued the following Angular CLI command:

The Angular CLI created the application in a new folder called salesforce-integration-angular. Below is a summary of some of the command’s output:

At this point, I used the ng serve command to show the newly created Angular application: 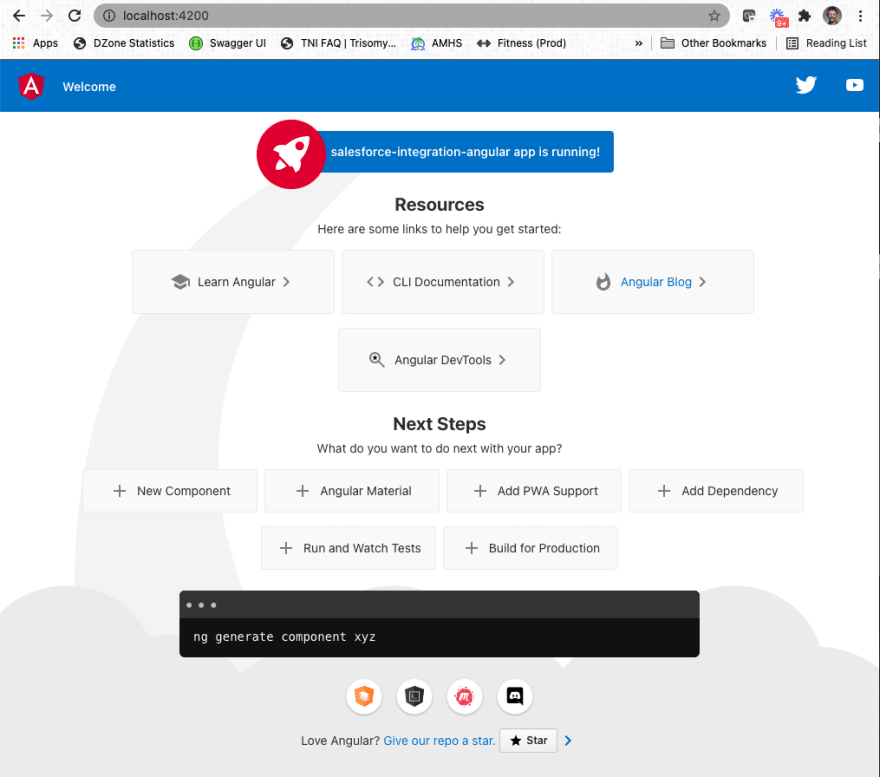 Of course, there is not a lot there, but at least the Angular application started in a matter of seconds.

The requirements for the widget application contained an interesting business rule. To avoid having to scroll back to the top of the page, I captured the information below:

As changes are made to contacts in Salesforce, the list of contact selection options should automatically update (including the title value).

This requirement translates to the widget application having to maintain the current state of the contact objects. Meaning, the contact list information always needs to be current.

In the “Leveraging Salesforce Using a Client Written In Vue.js” article, the Spring Boot service was updated to broadcast SSEs as changes were made to the state of the contacts stored in Salesforce. The Angular application will also need to listen to those same SSEs.

However, with the Angular application, I decided to use @ngrx /store, which is a Redux-inspired global state management for Angular applications—powered by RxJS. What this means is that I will wire the SSEs from Spring Boot to maintain the state of Salesforce contacts inside the browser. Then, the widget component can employ a reactive design to always have the latest changes—without having to make another call to the Spring Boot service.

Adding the ngrx/store dependency to the Angular 12 application required a simple command:

With this single dependency added to the project, I can focus on creating the widget component in Angular.

For this simple example, launching the Angular 12 application will present a new widget form. Because we’re keeping things simple, the form will look like this: 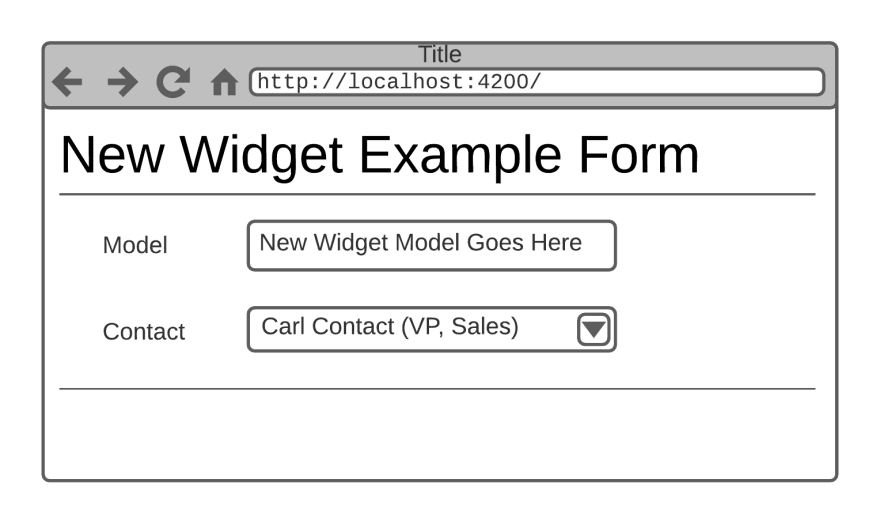 The model field will be a freeform text field and the contact field will contain a dynamic list of Salesforce contacts, kept up to date via the SSE listeners communicating with NgRx.

The Angular CLI responds with the following status updates:

As a result, a widget component has been created and is ready to use in the /src/app/widget folder of the Angular 12 application.

Rather than include all of the necessary information around configuring NgRx here, the following link to the NgRx website provides a great amount of detail:

Part of this documentation includes the following diagram: 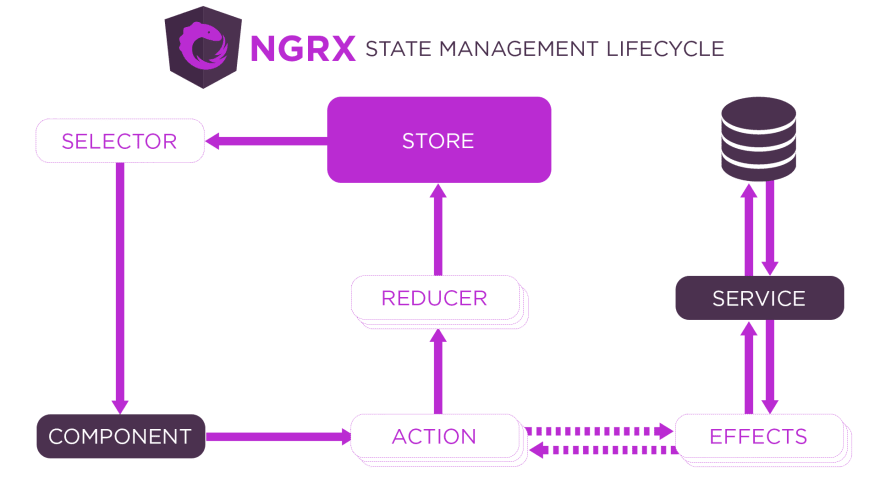 At a high level, we’ll add the following elements to the Angular 12 application:

Let’s dive into the code and see how this looks in TypeScript.

The ContactService handles making basic API calls to the Spring Boot service that has been used throughout this series. The Angular 12 client will simply make a call to the /contacts URI and return an “observable” containing a list of contact objects:

The EventService establishes a connection to the URI in Spring Boot which is broadcasting SSE updates. I added the getServerSentEvent() method to make the connection:

When a SSE arrives, the _onMessage() method is called:

This in turn dispatches the action into the NgZone:

The ContactEffect registers an event listener to the EventService, updates contacts from SSE messages that are received, and loads the original contacts from the Spring Boot service.

The ContactAction describes the events that are dispatched from the ContactService.

The ContactReducer makes sure the state changes are processed.

Finally, the WidgetComponent leverages all the NgRx state-management elements to provide a dynamic and self-updating list of contact information from Salesforce via the Spring Boot service and SSE URI.

The ngOnInit() method connects to the NgRx store, then receives the original list of contacts:

With the NgRx implementation in place, updates will be processed as they are received from the Spring Boot service over the SSE URI.

To make sure the Widget component is displayed when Angular starts, I reduced the app.component.html file to a single line:

Using ng serve from the Angular CLI, we start up the Angular 12 application with all of the above changes in place. 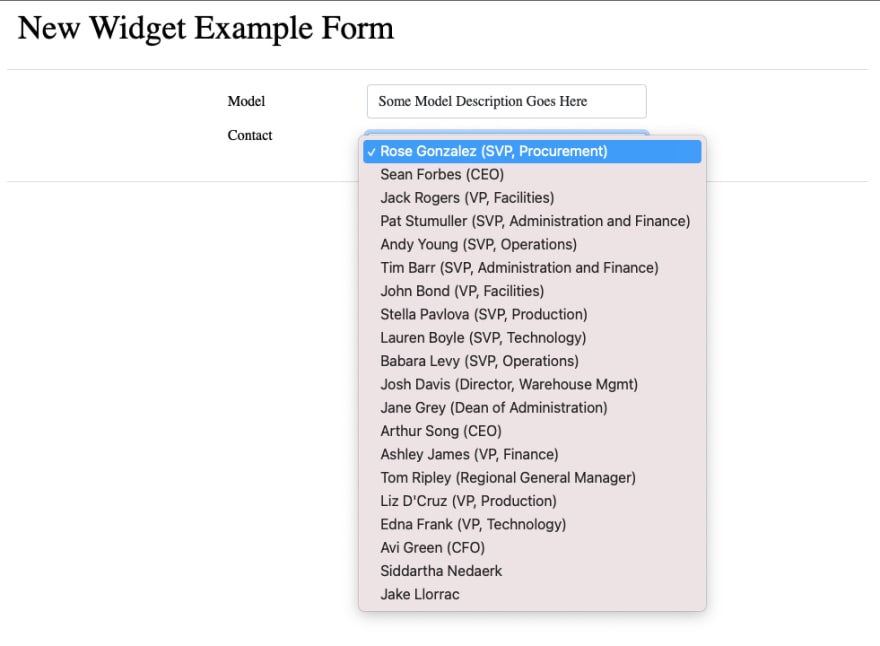 Using the following cURL command, I updated the title for Rose Gonzales from “SVP, Procurement” to “SVP, Information Technology.”

The PATCH command resulted in an HTTP status code of 202 (Accepted) and returned the following payload: 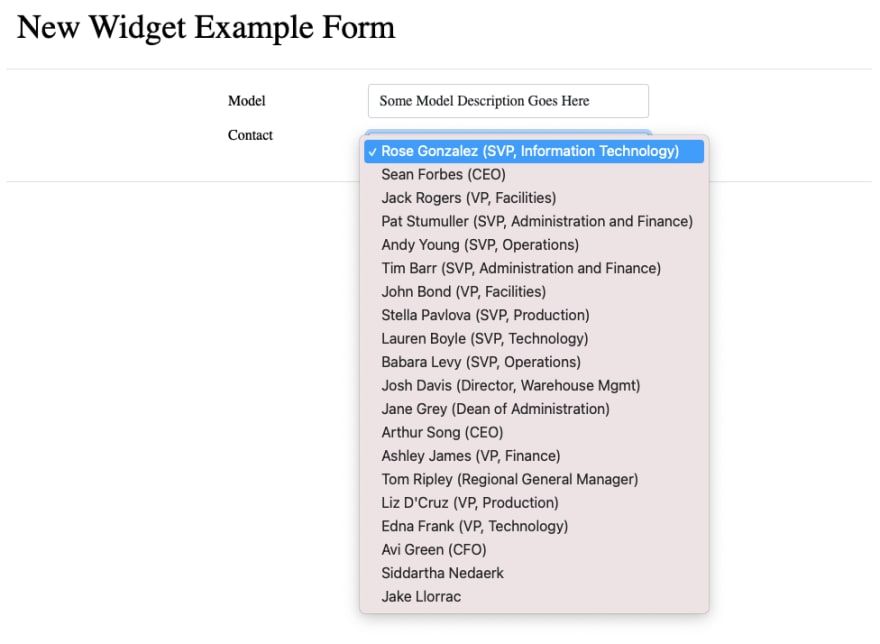 Notice how the contact title changed automatically for Rose Gonzalez.

Starting in 2021, I have been trying to live by the following mission statement, which I feel can apply to any IT professional:

In this article, I created a widgets component using Angular 12 which included a drop-down list of contacts populated with data from within the Salesforce implementation. I added NgRx state-management functionality to listen for SSE messages from Spring Boot in order to keep the list of contacts current. In this case, I leveraged the powerful NgRx state-management framework to do the work for me—requiring very few changes to the widget component at all.

Similar to my experiences with Svelte, Vue.js, and React Native, the time to create a ready-to-deploy component was very fast, measured in minutes rather than hours. Just like in all of this series’ articles, we have been able to use Salesforce without actually using a Salesforce client.

Of course, a production-ready scenario would require some additional work to prepare this application for “prime time” use.

If you are interested in the source code used for the Angular client, simply navigate to the following repository on GitLab:

In the next article of this series, I plan to turn things 180 degrees and use Lightning Web Components (LWC) outside the Salesforce ecosystem.

How to hack simple smart contract in the TON blockchain

Once suspended, johnjvester will not be able to comment or publish posts until their suspension is removed.

Once unsuspended, johnjvester will be able to comment and publish posts again.

Once unpublished, all posts by johnjvester will become hidden and only accessible to themselves.

If johnjvester is not suspended, they can still re-publish their posts from their dashboard.

Once unpublished, this post will become invisible to the public and only accessible to John Vester.

Thanks for keeping DEV Community 👩‍💻👨‍💻 safe. Here is what you can do to flag johnjvester:

Unflagging johnjvester will restore default visibility to their posts.