In this first article, I will explain how to install JanusGraph itself and how to test it with the InMemory storage backend.

JanusGraph is a Java application. So we need to have the Java JRE or JDK installed on the server to be able to run JanusGraph. At the time of writing this article, JanusGraph latest release page on Github tells us that it was tested with Java 1.8 (which is the same as Java 8). So it is better to install this particular version on the server.

I do not remember the exact package names for Java 8. So I will start by running the apt search command.

The following image shows some of the output of this command. 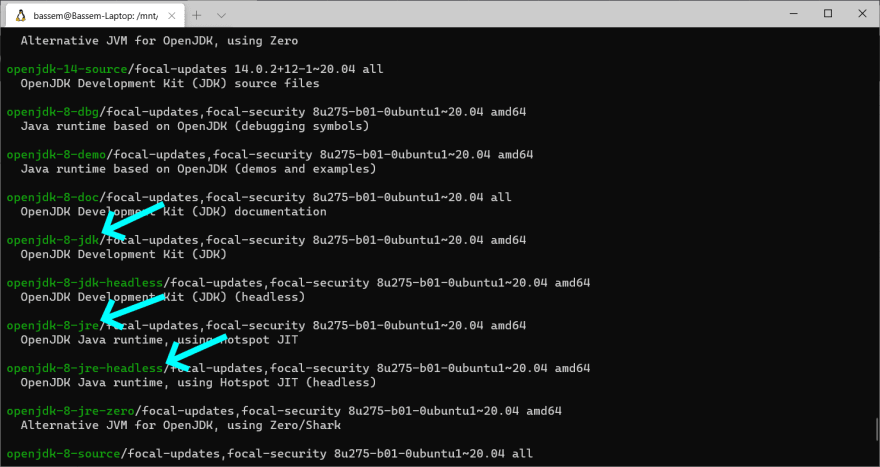 The "JDK" (Java Development Kit) is what you install when you need to compile and run Java applications. But in our case, we will download a pre-compiled version of JanusGraph and we will just need to run it. So the "JRE" (Java Runtime Environment) will be enough. Now the choice is between the "JRE" and the "JRE headless" packages. Normally, on servers, you install the headless version which is a minimal version of Java that should be enough for executing non-GUI applications. But for some reason, JanusGraph gave me errors when I tried to run it on the headless version of the JRE. So I ended up having to install the full JRE.

Most of the following shell commands will require Superuser privileges. So switch to the Superuser then enter the command to install the JRE.

I place prepackaged application bundles under "/opt". So you can go to this directory or any other directory you like. Then use the "wget" command to download the JanusGraph ZIP file from Github. Then the "unzip" command to extract the files from the ZIP archive.

You can get the download link from JanusGraph's latest release page on Github. And you may need to install the "unzip" package if you do not already have it.

You will be prompted to enter the password for this new user.

Now let's make this newly created user the owner of the JanusGraph directory and all its contents.

Switch to the "janus" user and run the "gremlin-server.sh" shell script 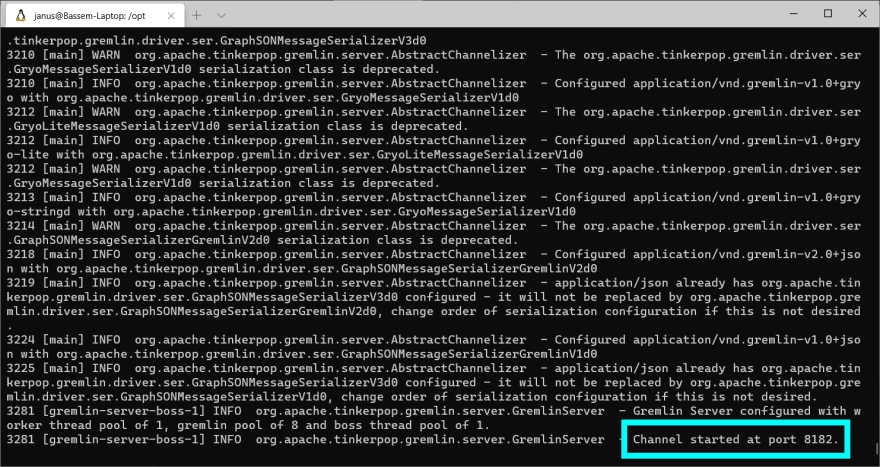 Test the Server From the Gremlin Console

Keep the first terminal window/tab open to see the server output logs. And open another terminal. Switch to the "janus" user. And run the JanusGraph Gremlin Console. 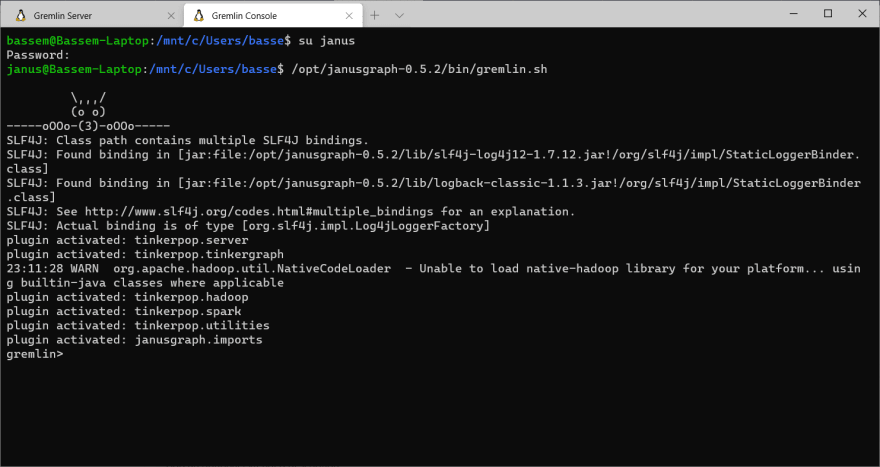 I suggest you look at the configuration file "remote.yaml" under "/opt/janusgraph-0.5.2/conf/". The most important lines in this file tell the Gremlin Console the hostname "localhost" and the port number "8182" that the server is running on.

To make the Gremlin Console send a command to the server, you need to put :> in front of the command. For example

If you want to make the Gremlin Console send all the commands to the server without having to remember to add :>, then you can use the following command

You do not need to create the "Graph" and the "Graph traversal source" objects. The server already has the variables graph and g defined for you.

The graph will be initially empty

So let's create a couple of vertices

And make sure they were saved

Bummer! The Data Is Not Persisted

The default server configuration file "janusgraph-0.5.2/conf/gremlin-server/gremlin-server.yaml" makes JanusGraph use the "InMemory Storage Backend". So the data is not written to any persistent storage. And when you shutdown the server, all the graph data will be lost. Let's test this!

Open the terminal window that was used to run the Gremlin Server and press CTRL + C on your keyboard to shutdown the server. Then enter the following command to start the server again.

Now let's see the vertices count after the server restart

This confirms that all the data was lost when we restarted the server.

In the next articles, I will show how to make JanusGraph use storage backends that actually persist the graph data.