I haven't done any Python programming in years. I think it's probably 10 years ago, and then it was only some basic learning-how-to-program stuff.

I'm participating in a project at work. We're doing some prototyping with a Raspberry Pi and some custom software. While the software works brilliantly, we want to bolt some extra features onto it.

The first thing I thought I'd tackle is sending an email. I figured this would be the most complex piece of code I'd have to write. If I could get that done, the rest would be a piece of cake. Or so I thought...

My first instinct was of course to end up on Stack Overflow. My google-fu landed me on this question and answer. 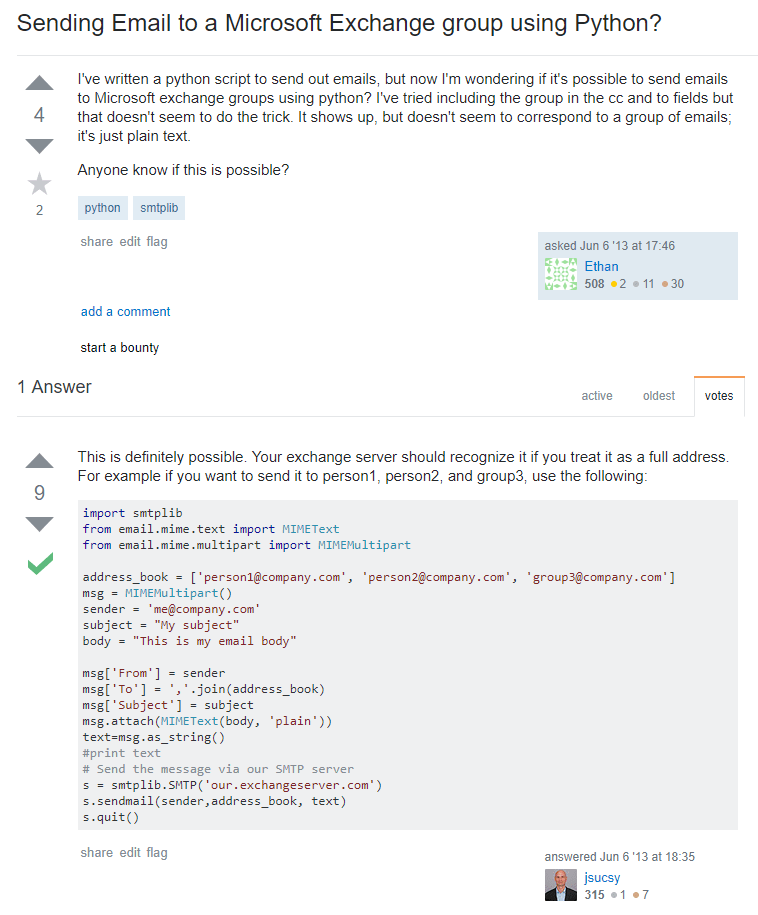 Turns out it's really simple. NICE!

By importing smtplib from the standard library, you're able to send emails quite easily. I had to look the syntax of function definitions and I also took the time look up the style guide for Python. I always prefer using the best practice naming standard of a language.

This led me to write the following function:

Since I'm using an Exchange server, I have to initiate TLS. Apart from that it's pretty straight forward.

Running the script in the terminal

I also wanted to be able to use the script by running it int the terminal. This can be done by calling the function after it has been defined. When the Python interpreter goes through the file, it'll execute the call to the function.

In Python however it's considered good practice to put the call inside an if __name__ == " __main__": clause. This is done to detect if the file is run directly or imported by another file or module.

When the Python interpreter runs the file directly (for example in the terminal), it will set the global __name__ variable to __main__. When the file is imported by another file or module, __name__ will be set to the name of the file or module.

By putting the execution code inside if __name__ == " __main__":, we're making sure the code is only run when the file is used directly, and not when it's imported for use in another peace of code.

I wanted to be able to specify the parameters to the send_mail function by passing them in when executing the file in the terminal. Turns out Python has a library for that too!

I love this language!

Just to make things more interesting, I also provided an option to provide a file path instead of the body text. The script will then get the text from the file and use that as the body of the mail.

There isn't much error handling in these scripts, and that's mostly because of two reasons: It's only going to be used by a small number of internal people and the error messages from the interpreter will have to do.

After not having used Python for nigh on 10 years, I'm starting to realize what I've been missing out on. While this is a tiny example, it's been incredibly low friction. I'm starting to see why so many like Python, and why it's chosen as a starter language in some universities.

I'm looking forward to playing around with Python some more.

Once suspended, jonstodle will not be able to comment or publish posts until their suspension is removed.

Once unsuspended, jonstodle will be able to comment and publish posts again.

Once unpublished, all posts by jonstodle will become hidden and only accessible to themselves.

If jonstodle is not suspended, they can still re-publish their posts from their dashboard.

Once unpublished, this post will become invisible to the public and only accessible to Jon Stødle.

Thanks for keeping DEV Community 👩‍💻👨‍💻 safe. Here is what you can do to flag jonstodle:

Unflagging jonstodle will restore default visibility to their posts.