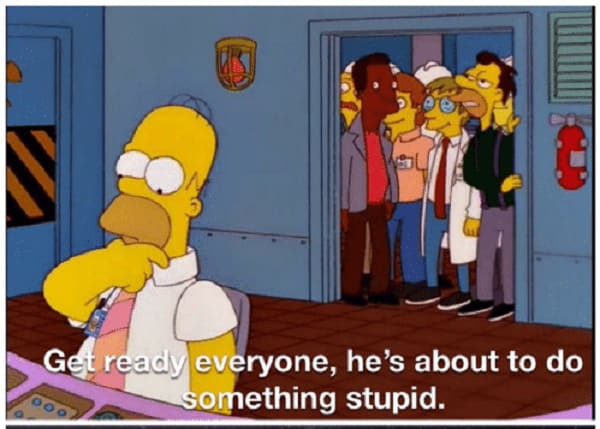 I would be lying if I said I did not think that the above picture was happening every time I decided to try something new. In fact, with how often I decide to begin a new hobby or interest, I'd be stunned if it wasn't true. My track history of trying new things reads like person tossing dartboards and a wall plastered with uncommon and unexpected activities. From snowboarding, to Mixed Martial Arts, I have quite literally tried more than I ever thought I would in a 1000 lifetimes. That was, however, until I decided I wanted to learn software engineering.

My journey into Software Engineering is one I think about often, but can never quite determine how it actually came to be. Like most coders, I have been interested in computers ever since I learned how to get the dial-up internet on my old family computer to work (you're picturing the sound now, aren't you? Me too). Computer games were a large portion of my childhood and, let's be honest, my adulthood too as well, and I was constantly intrigued by the things computers could do. When I wasn't spending exorbitant amounts of time playing video games, I was reading about how computers and websites actually worked. Eventually, the things I began to read about started to show their relevance in my day to day life in a MASSIVE way... the introduction of MySpace.

For those that do not know (please don't tell me this, I'll feel way older than I am) or remember MySpace: it was an online Social Networking site that could quite literally be called the Grandfather of Facebook and social networking in general. Every day, kids of all ages would rush home to check their notifications, likes, and pokes. We would spend literal hours pondering over who to place in our top 3, 5, or 10 friends(and facing unthinkable backlash when we left someone out by accident or had to cut someone), but the most memorable aspect of MySpace of all, and the one I focused on the most, was the design of my profile page. See, MySpace did something that no other website ever allowed me to do: utilize CSS and HTML to make my page look the way I wanted, and oh boy did I have ideas. After reading about these "languages" for months, I finally made the connection that I could use them for my profile! It was then that I knew I wanted to learn more.

So Then Why the Bootcamp?

Despite the passion that developed as a middle schooler, that flame eventually burnt out... until I got to college. See, I was one of those college students who had absolutely no idea what they wanted to study. I bounced around more than you could ever imagine. But in the 2nd semester of my freshman year, a friend convinced me to try a Computer Science course with him. Wait... COMPUTERS! Why didn't I see it sooner? I don't think I ever signed up for a class as fast as I did that one through my entire college career. Unfortunately, life does not always play out the way we think. Instead of thriving, I struggled... HARD. The way it was taught in college was not conducive to my learning style... and so I let coding go once again.

Fast forward a few years later, I am now sitting comfortably in my finance office job and all I can think is: What if? What if I tried harder? What if I sought out the help I needed? What if I tried again the next semester with a different teacher? Enter Flatiron School. I will not let "what if?" run my life anymore. I will become a software engineer.