I mentioned Proton Native earlier but hadn’t tried it extensively until now.
So what is it, here are some of the promises

So PN had a very interesting beginning, it utilized a library called libui-node which was kinda neat. In my opinion it wasn’t ready for production; it didn’t even have the ability to include images. I believe Vuido still uses libui-node. Since then the author totally rewrote PN with QT bindings. Here’s a great post of the changes. There’s a lot of cool features now, like flexbox layout and images.

PN utilizes react as the view layer and allows you to write node.js directly in those files. This library feels like a spiritual successor to now defunct React Native Desktop. I won’t go through the setup that’s here. Right now there is a lack of components but there is enough to get stuff done, numbering in at 9 right now.

Ok some caveets I found was the documentation is pretty sparse again. It took me a lot of reading the source code and exploring issues to figure out some thing. For example there is an component and the extent of the docs is
props : style, resizeMode, source

What it doesn’t tell you is that source takes an uri like so
source={ uri: "image.png" } another problem is that right now only external url images seem to work, not local. Lastly reading through the issues apparently only .png works on macOs.

Another couple weird issues border-radius is really finicky works on mostly square dimension components but not rectangular. Emoji’s are not rendered 😞 .

Ok enough bad mouthing, let’s see some interesting stuff! I am really bored at home right now and lacking work so I’ve been doing lot’s of fun apps and experiments. I use Ubuntu and nordVPN, I like GUI’s for a lot of things and unfortunately there isn’t one. What I decided to try was mapping the nordVPN cli to Proton Native. This isn’t obviously a production ready approach, for that there is an API. I didn’t want to setup and account and read docs all day so I went with my CLI solution. If you want to see a pretty good example of using the API check out this.

Way at the bottom of this page are the CLI options for nordVPN. on an aside I found out linux is terribly supported even here, there’s no option to connect via a country or anything very useful at all. Here’s a few useless commands they offer

I mean it just prints out some countries, you can’t use that info in any way though.
Ok some of the useful commands are

Another interesting issue, nordvpn connect does accept a server but you have to give a specific one like ca1111 why don’t they just accept a country here…

Inside my project I started to link up these features with node.js

So a spawned child process returns the data in a buffer so I convert that to a string, then do some dark arts to clean up the string. and Voila I have a status state.
Connect was very similar 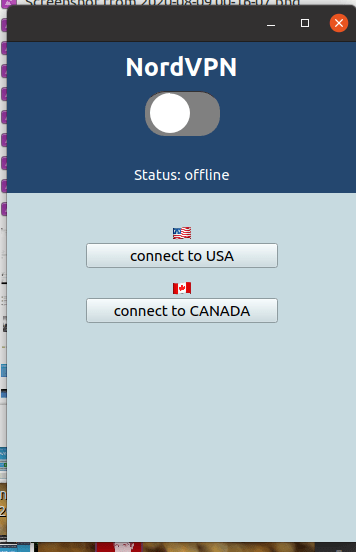 Ok last step time to package this bad boy for distribution. I’ll let you read those for yourself but one thing I tripped on was this command
npx nexe bin/index.js -o out/my-app # Create our binary
If you are not using one of the available matching prebuilt binaries it tries to build locally, and for me it just failed hard; so check here and use nvm to adjust your node.js to a matching one.

So my last surprise was the generated app was 170mb. I’m pretty sure that’s on-par with electron. I tried compiling the example caculator app also just to double check it was some weird dependancy I included. So yes you can get a 170mb calculator if you want.

Stay tuned I’m going to check out nodeGUI next post.

Once suspended, jswhisperer will not be able to comment or publish posts until their suspension is removed.

Once unsuspended, jswhisperer will be able to comment and publish posts again.

Once unpublished, all posts by jswhisperer will become hidden and only accessible to themselves.

If jswhisperer is not suspended, they can still re-publish their posts from their dashboard.

Once unpublished, this post will become invisible to the public and only accessible to Greg, The JavaScript Whisperer.

Thanks for keeping DEV Community 👩‍💻👨‍💻 safe. Here is what you can do to flag jswhisperer:

Unflagging jswhisperer will restore default visibility to their posts.