Grids are a powerfull feature of CSS but they can be a little overwhelming at first. There are rows, columns, areas, lines, and multiple syntaxes for defining layouts. How do these concepts fit together and how to use them effectively?

In this article, we'll go through some basic concepts of CSS grids and learn how we can use grids to build layouts. My goal is to shed some light on how to define grid areas grid lines, which I found somewhat confusing when learning CSS grids.

A CSS grid is a display type that sets the layout of its children according to the grid specification.
Grids are built of columns, rows, areas, cells, lines, tracks, and gutters. To understand how these relate to each other, let's go through some definitions. So, bear with me 🐻

The smallest element in a CSS grid is a cell. It's an area defined by grid lines in all directions with no lines running through it.

Gutters are spacing between tracks and are defined using column-gap, row-gap, and gap CSS rules.

In our example, we are using a grid-template-columns syntax which has named grid lines using the bracket [line-name] syntax. Notice that some of the lines we've defined have two names, such as [first-col-end second-col-start]. Giving two names will make it easier to define our grid areas later on because of a special feature of CSS grids called implicit grid areas.

While you can name your grid lines with any name, I've chosen to end them with start or end. This may seem like a minor detail, but it unlocks 🔓 a "hidden" feature. Grid area names will now be created for us. So using grid line names first-col-start and first-col-end on adjacent lines will create a grid area named first-col 🥳 We can now use first-col when we are defining grid areas with grid-column or grid-area properties.

Next, let's take a look at a layout example with a navigation header, content area, sider panel, and a footer. We will define our grid lines by name and using those names when we define the areas of the different layout components. 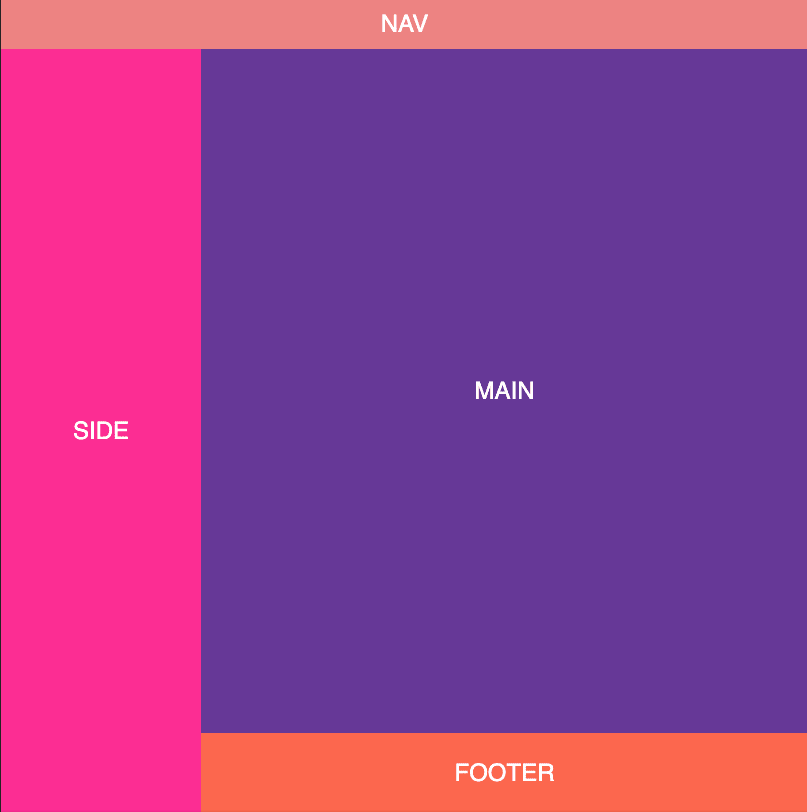 To get started, here's the HTML structure we will be working with.

We will set the html and body height to 100% with no padding or margin so the grid will have the full size of the page.

Next, we'll add display: grid to the body and define our column grid lines using the grid-template-columns CSS rule. This declares two columns that are defined by four named grid lines: side-start, side-end, main-start, and main-end. The first column will be 200px wide, while the other column has a width of auto.

When we use grid-template-colums and grid-template-rows with grid line names like this, named columns and rows will be automatically generated for us 🥳. In this case, the grid we will get the columns start, side, and main and the rows nav, content, and footer.

If we didn't care about the column and row names, we could just write grid-template-columns: 200px auto and grid-template-rows: 50px auto 80px to define the same layout.

Next we will define how our HTML elements will fit into the columns and rows.

Because we have the generated row and column names, declaring the nav-element position and size can be done with grid-row and grid-column declarations. We are setting grid-column to side / main which tells the browser to extend the nav element from the start of the side column to the end of the main column.

Defining the position and size of the main-element can be done using a single grid-area declaration. grid-area is a shorthand for setting grid-row-start, grid-column-start, grid-row-end, and grid-column-end. Because we are setting only two values (content and main) this is the equivalent of setting the row and column ending to the same values as start.

You could also use the grid lines to define these values.

For the sidebar we will use grid-area and grid-row-end to define the area.

The grid-area declaration is similar to the one we used before. With the grid-row-end declaration, we make the sidebar extend to the bottom of the screen to the end of the footer row. This is cool, because it shows how powerful CSS grids can be 😎

Lastly, we define the footer CSS.

Here we're using the grid-row and grid-column declarations. This is the equivalent of writing grid-area: footer / main.

Now we have all the CSS we need for our layout 🥳 If you want to check out the full HTML/CSS code, you can check the out at codesandbox.io. There you'll also find two other layout examples made using CSS grids.

There's more to it

I hope this article has shed some light on creating layouts using CSS grids. There are, however many features we didn't cover. I've compiled here a few resources which you might find interesting if you want to dig deeper.

Photo by Sharon McCutcheon on Unsplash

Once suspended, juhanakristian will not be able to comment or publish posts until their suspension is removed.

Once unsuspended, juhanakristian will be able to comment and publish posts again.

Once unpublished, all posts by juhanakristian will become hidden and only accessible to themselves.

If juhanakristian is not suspended, they can still re-publish their posts from their dashboard.

Once unpublished, this post will become invisible to the public and only accessible to Juhana Jauhiainen.

Thanks for keeping DEV Community safe. Here is what you can do to flag juhanakristian:

Unflagging juhanakristian will restore default visibility to their posts.