During a previous hackday, I had the opportunity to try a fairly recent programming language called ReasonML. Amazed by the simplicity and power of ReasonML, I promised myself to get closer to its underlying language to give credit where it is due. Do ReasonML qualities come from OCaml?

As an experiment, I took this opportunity to test OpenGL and prove that it is possible to code a humble game in OCaml! Here's what the game looks like at the end, after a few hours of development.

The purpose of this article is to determine the magnitude of the differences between ReasonML and OCaml, and to understand why ReasonML has become so popular so quickly, and why OCaml hasn't. The aim is also to determine if it is still useful to use OCaml rather than ReasonML for future projects.

OCaml is the main implementation of Caml created in 1996 by a group of researcher from the French Institute for Research in Computer Science and Automation (a.k.a. INRIA).

Even though it is known for its robustness and its large standard library, its main power lies in its strong static-typing and type inference system.

Although part of the ML (Meta-Language) family that is purely functional-oriented by nature, OCaml brings many object-oriented features that make it special. That's mainly the reason it was named Objective Caml (aka OCaml).

So, it's perfectly possible to work with Classes, Objects, Constructors (named "Initializers"), Inheritance and so on.

OpenGL (for Open Graphics Library) is a cross-platform and cross-language API that allows to render 2D and 3D vector graphics. It takes care of handling interactions between the source code and the system GPU to benefit from hardware rendering capabilities.

OpenGL was developed in 1992 by an old and famous commercial company called Silicon Graphics. Since 2006, the project has been managed under a BSD like license by a non-profit consortium called the Khronos Group. This consortium is also responsible of the WebGL and Vulkan standards that are very popular today.

Vulkan is usually refered to as the OpenGL next API for graphics rendering.

In this part, I'll give you the most objective feedback about my development experience using OCaml and OpenGL on a concrete project: the Space Invader game. 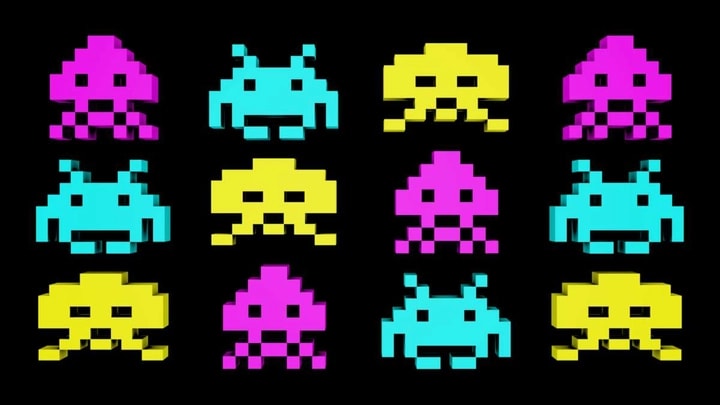 Also, I'll explain the intellectual journey that led me to design the project foundation. Then, I'll describe the different stages of project building.

How Does it Work? What Do We Need?

As for most programming languages, we need to setup a compiler which is capable of transforming our OCaml source code to a suite of machine instructions.

According to the official documentation, the OCaml core distribution provides two compilers, ocamlc and ocamlopt.

Of course, I do not pretend to give you here the full functionalities of these tools, which are in fact much more complicated to understand.

I can already imagine your faces after reading these few lines... but don't go away, I assure you that the rest will be much more exciting!

In practice, built-in compilers are almost never directly used on real world projects because they require a lot of work to setup and maintain. It is common to use higher level tools that also facilitate the import of dependencies (including external modules). Among these tools, we can mention Dune, Oasis and OCamlBuild. 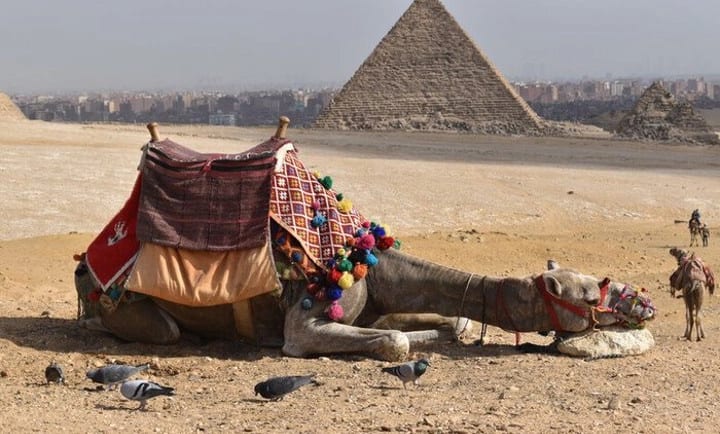 In my case, I choose a more undisclosed tool (obuild) because of its simplicity and its brief documentation. So, the first step is to install the OCaml Package Manager (aka opam) in order to install the obuild builder.

As for every new projet, my approach consists in setting up the whole tech stack in Docker so as to avoid overloading my workstation, and to allow other people to participate easily. Therefore, I started looking for a Docker Image that includes opam on docker-hub.

Since I need to work with OpenGL to draw the game, and I won't develop an OpenGL library from scratch, I'll install lablgl at the same time by adding this line at the end of the Dockerfile:

lablgl is one of the most advanced OpenGL interfaces for OCaml. Despite its lack of documentation, it remains the most talked about library after several minutes spent on search engines...

Lablgl is based on Glut (The OpenGL Utility Toolkit). Glut takes care of all the system specific mechanisms to create windows, initializing OpenGL and capture input events.

Now I have all the ingredients, I need to build the application. I create my entry point file in src/main.ml.

Then, I create the obuild config file ocaml-invader.obuild.

And a Makefile to facilitate development.

OK, everything is set, I can now start developing the game!

As with most video games, the whole system is based on a game state, some state mutations (through system inputs), and a rendering engine / loop. 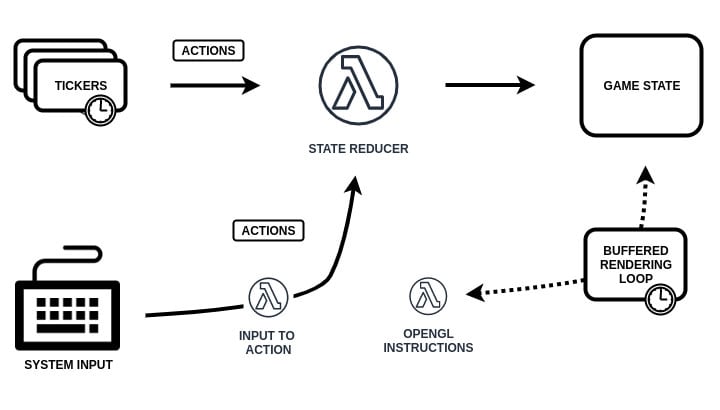 Fortunately, I won't have to manage all these components by myself. Indeed, labgl (through its Glut module) offers most of these features out of the box:

Therefore, I only have to care about:

Now that the basis of the architecture is established, let's get down to business by expanding the main function in main.ml:

Zoom In The Game Controller

The link between the game controller and actions (tickers and keyboard inputs) is declared in the gameController function of the Main module.

The entire rendering logic for the game is located in the Game module of the game.ml file. This logic is composed of a switch between two screens, a game screen, and an end screen depending on whether the game is finished or not.

Each component of the game (Invader, Spaceship, ...) has its own module and its own render method, which makes it possible to separate the responsibilities in the code. For example, here are some parts of the Invader rendering.

For each rendering, it may be necessary to:

In the example above, for each invader I:

In the case of the invaders, I used simple squares for lack of time. But I know that it is possible to make much more complex shapes, as in the Spaceship below:

As a result, the game is very fast, no lag and the compilation time is almost instantaneous, what more could you ask for? If you are interested in the code (or want to play), the game is available in open-source on Github.

Although confused at first, I am very proud to have achieved this project. This was an opportunity for me to measure the particularities that makes OCaml so intimidating for most developers.

Indeed, it is very complicated to install the base stack to develop in OCaml. And although some tools exist to make our life easier, they are poorly documented. This lack of documentation also applies to the language itself. The documentation is scattered among many academic and research-oriented sites, making it very intimidating for a beginner.

Clearly, it is in OCaml's weaknesses that we find the strength of ReasonML. The languages are not so different, but their communities and ways of working are clearly in contrast.

In my opinion, I would say that OCaml suffers from its original academic use, and that it deserves a little more love from mainstream developers. It is incredibly fast to compile and run, and it competes well with popular languages.

To conclude, I would still advise to prefer ReasonML over OCaml (as its community keeps growing). This way, you will adopt a functional way of coding that can be used in other derived languages such as F# or Scala.

Once suspended, juliendemangeon will not be able to comment or publish posts until their suspension is removed.

Once unsuspended, juliendemangeon will be able to comment and publish posts again.

Once unpublished, all posts by juliendemangeon will become hidden and only accessible to themselves.

If juliendemangeon is not suspended, they can still re-publish their posts from their dashboard.

Once unpublished, this post will become invisible to the public and only accessible to Demangeon Julien.