I've been sending a weekly newsletter for CFP Land for over a year now, but in the past few months, I started to encounter a problem. Gmail was suddenly marking links in my email as "Suspicious":

What could I be doing wrong?

First, I went over what I knew:

I ran across a few people with similar problems on the internet that suggested checking my domains and Sendgird's IP addresses against several blacklists, but that wasn't the issue. I was pretty lost at this point, but I started to have a hunch.

Technically everything seemed good, so I started to see if for some reason my content was triggering this warning. I imagine that Google's algorithm is complex, and I was probably doing some combination of things that it found problematic. Now, I just had to figure out what it was.

How I generate my weekly email newsletter

CFP Land is a weekly newsletter for technology conference speakers. I started off compiling the list manually each week, but as it's grown in popularity, I've started automating large swaths of the process.

I actually send a couple regular email newsletters, so while this process sounds complicated, it's completely automated. I just add new CFPs to Airtable as I find them and the newsletter goes out like clockwork every Friday morning.

How Google decides an email's links are "suspicious"

I don't work for Google and I don't have any inside line there, but I've been in the email sending industry long enough to have some idea how it works.

So, if I were going to try to identify "suspicious" links, here are some of the factors I'd use:

I figured I would look through my email and see if there's something I might be doing to set off any of these alarms. Next, I'd start testing some updates to see if I could get the warning to go away.

Tracking down the issue

First, I had to replicate the "Suspicious link" warning consistently. Because it had appeared on the latest email I sent, I started there and set up my local environment to send me one email just like the one that went out to all my subscribers this morning. 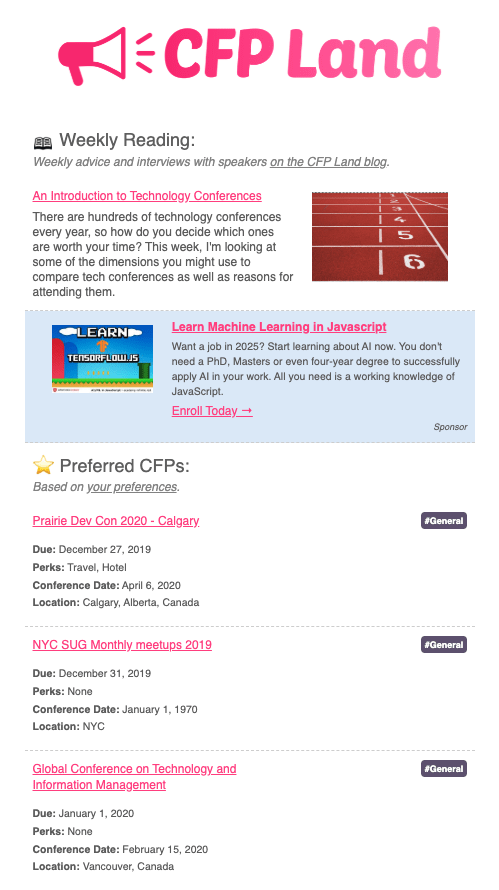 When I sent the email to myself, Gmail did not mark the links suspicious even though the exact same email sent this morning was marked suspicious...what the heck? 🤷‍♂️

Because the two emails had the exact same subject line they had been grouped into a single conversation. My first hunch was that Gmail might consider the second email safe because I had clicked a previous email in the same conversation.

I confirmed this by sending the exact same email content with a variation of the subject line. It was flagged suspicious, so now I knew the following:

Now I could consistently reproduce the "Suspicious link" warning, so I could start to test parts of the email that were triggering it.

Email tracking is a double-edged sword. It allows you to see when an email is opened or link clicked, but you can't track anything without affecting the outcome (this is known as the Observer Effect). Tracking links and open trackers are sometimes marked suspicious by email clients, so I tried disabling each one individually, then both together.

Removing open tracking and click tracking did nothing for me - the message persisted, so I went on to try another tack.

Another debugging method I use when I'm completely stuck is to remove code until the issue is fixed, then slowly add it back to figure out which line is causing the issue.

This method is complicated by the knowledge that my email could have multiple reasons that links were flagged "Suspicious" but I figured it was worth trying.

First, I tried removing the sponsored link. I figured maybe Google didn't like being left out of the ad revenue on email so maybe they're penalizing my newsletter for having sponsors.

Next, I removed the footer. I thought maybe the text was too small or the contrast not high enough so Google might be wary of it.

Removing one section at a time and then removing each combination of sections was going to take a while, so I decided to go the other direction.

Next I would start with a working email - no matter how simple - and add pieces back to it until it was flagged "Suspicious" again. So, I stripped the email down to just a text headline, one line of text, and the footer:

It worked! My 11th email an hour after starting this process was not flagged as suspicious by Gmail.

Unfortunately, this email wouldn't work as a newsletter, so I started adding pieces back to figure out what was causing the "Suspicious link" flag.

Step 5: Adding the header back

I started by putting the header into the email. Immediately, it was flagged!

This gave me a new idea. Maybe Gmail was concerned about my images, and not the content of my email?

After trying a couple of combinations of content and images, I realized that Gmail was in fact flagging my emails because of images I had hosted on Imgur.

I use Imgur to host a lot of images because it's free, simple to use, and fast. The blog post, sponsor image, and header all used Imgur as their host, but by replacing the images on Imgur with images hosted in Google Drive, the "Suspicious link" warnings immediately went away.

I learned a lot about email delivery during this process, but it also confirmed a common complaint about working with Google. They're often not very transparent about their rules, and sometimes - as in this case - the rules don't even seem to be consistent or logical. Imgur is a perfectly reasonable choice for hosting images, so it seems strange that Google would enforce a rule that penalizes it.

I'd love to hear your thoughts. Is there something else I could do to get my emails delivered in Gmail without this warning? Hit me up in the comments or on Twitter.

Deploying IAC with your secrets in Terraform Vault

The 'S' in IoT stands for security