I've wanted to move away from Feedly for awhile and finally found my alternative in Miniflux.

I had been having issues with the Feedly app where it would suddenly sign me out and take a while to log back in. Apparently that's all it takes for me to drop a service… I also wanted to run something myself and possibly build on top of it.

I had contemplated moving to microsub as outlined in my replacing Feedly post. I tried out ekster and I think it's still running 🤷‍♂️. I didn't like the readers I tried and wasn't a fan of how ekster doesn't seem to store data persistently.

It's just a go binary and PostgreSQL. I run the binary on my kubernetes cluster and PostgreSQL on a Lenovo Thinkcentre I recently bought. I'm still not super happy in my openEBS storage so am running the database using podman with a volume mount directly from the node.

Running containers as a non-root account is pretty easy with podman and can be managed by systemd. I did the below to set it up.

You'll notice I'm using the bitnami postgresql image. This image doesn't run as root 👍. The output of the podman generate systemd can then be copied to $HOME/.config/systemd/user. More info can be found on the podman site.

I like the minimal UI and it works pretty well on mobile as well. The delay in fetching feeds took a little getting used to. I did lower the thresholds, which was just an environment variable config. You can see my kubernetes config in kasuboski/k8s-gitops 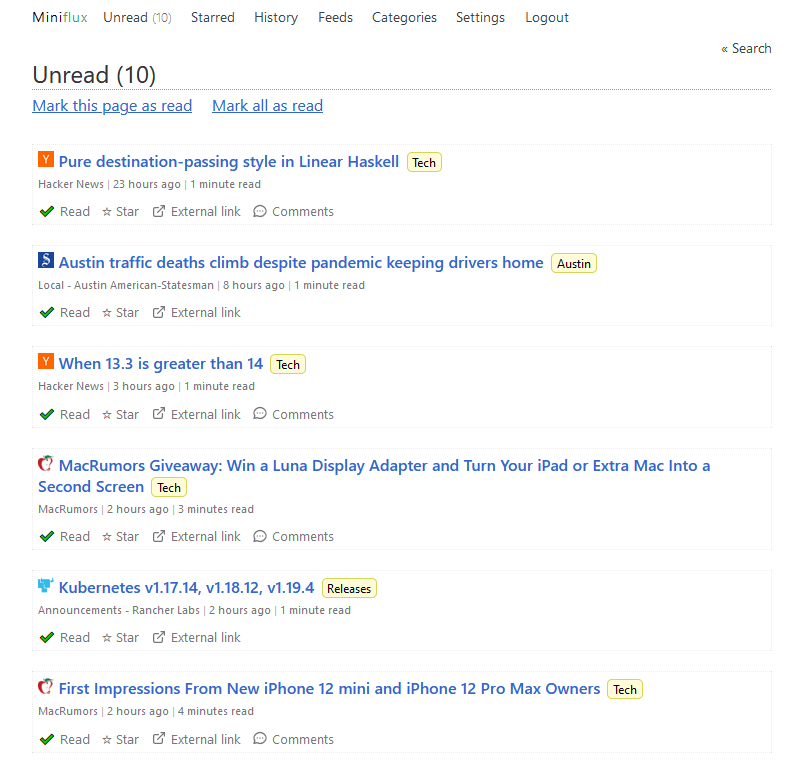 With Feedly I had a limited set of feed categories because that was a limitation of the free plan. I want to decide what I actually want now that I have no limits with miniflux.

There is also an API that I want to build some things around. My first thought would be to make a way for others to follow what I follow as well.

🤪 Tell me how to build a duplicate detection system!

How I built my design portfolio website from scratch using Tailwind and Nextjs?